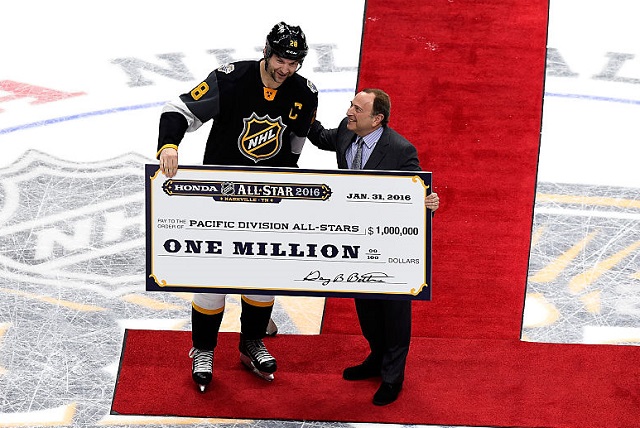 The Stanley Cup Playoffs are under way, which means the NHL regular season is over, which means we will now take a moment to reflect back on said regular season and examine some of the weird, odd and strange things that occurred over the past six months.

The list has been narrowed to seven items, but there were plenty of head-scratching moments that received consideration, like P.K. Subban dressing as Jaromir Jagr at the All-Star Game, the lady who tossed her bra on the ice at a Flyers game and the Coyotes dressing a bank manager as a goaltender. If those weren’t good enough to make the list, what are sort of wild and crazy things did make the list?

Great question. Here are the top WTF moments from the 2015-16 NHL season:

7. Jaromir Jagr has sex with an 18-year-old model

It’s 2016. It’s a great time to be alive. It’s a world slowly moving toward a place where any two consenting adults can engage in sexual intercourse and it’s totally cool and not at all scandalous. It’s not perfect, but it’s improving. So why is Jaromir Jagr, a world-famous hockey star, having sex with an 18-year-old model, a WTF moment?

It’s not. The WTF part of this is everything that happened afterward.

Jagr, as far as any of us knows, is single. The sex was consensual and legal. Yet, for some reason that no one will ever be able to truly understand, the woman attempted to blackmail Jagr. She wanted $2,000 or she would leak the photo online. Because if word got out that Jagr had sex with a woman… see, how does that sentence end in a way that makes sense for her? It’s baffling.

When he became aware of this scheme, Jagr said, and this is an interpretation based on what we know, “hahahahaha lol OK go ahead.”

This actually reminds me — Heidi Klum, if you are reading this, feel free to blackmail me with photos of us in bed together then leak them online. I will find a way to live with the shame. E-mail is in my Twitter bio. Thanks.

6. Some idiot stole a puck from a child

I’ve attended about 60 games per year since 2009 as a media member, so I’ve seen my fair share of pucks fly into the crowd. Without question, when I’m looking closely, when an adult grabs a puck, he or she always looks to give it to a kid. Sometimes, they are with their kid or a nearby kid puts on the puppy dog eyes and the adult has no choice.

Anyway, check out this jackass in Pittsburgh.

Dan Bylsma, back in town with the Buffalo Sabres, tosses a puck with intention of it landing in a child’s hands. Instead, some doofus lumbers from his seat to intercept the puck.

This is one of those situations where boos or pressure from the nearby fans should inevitably lead to the man realizing his mistake and returning the puck to its intended owner. But no! He kept the puck!

Fear not, as the Penguins saw this and made sure the child that had his puck stolen got two pucks out of the deal.

You deserve it, little man! pic.twitter.com/vSVPEPtWpL

Side note: That’s a sweet hat.

5. Craig Smith makes a save on himself

No matter how many times I watch this, I can’t get over everything that needed to happen for this play to occur AND the fact that it occurred to the same guy who once missed an empty net from two feet away.

Smith is a bit blessed; in both cases, the Predators won the games.

4. Everything involving Dennis Wideman and the linesman he cross checked

During a game against the Predators, Dennis Wideman was rocked by a hit deep in his own zone. Clearly dazed, Wideman got to his feet and skated toward his bench. But before he could arrive, for reasons only he can truly know, he cross-checked linesman Don Henderson, who has not been on the ice since the hit.

Wideman remained in the game and was never examined for a concussion, despite a hit that clearly rocked his head but later blamed the hit on the concussion, claiming it was a mitigating factor in the ugly incident.

The NHL had none of it and suspended Wideman 20 games.

Here’s where it gets truly WTF.

Wideman appealed and wanted a reduced sentence because of his concussion and he won. The suspension was reduced by an arbitrator to 10 games, but only after he had sat for 19 games. The process was dragged out to such an extent that all Wideman got out of “winning” the appeal was one game and nine games’ worth of salary restored.

This tradition goes back to the end of last season, but became a phenomenon this season.

When teams win games, they tend to hand out awards to that game’s top players. The awards are usually things like a belt or hard helmet or shovel or something along those lines. The Panthers decided that their award would be a hooded sweatshirt that depicts the head of actor Kevin Spacey floating in space.

It all culminated in Spacey attending a Panthers game and seemingly being tickled at just how much the fans were into this whole thing.

We may be on a collision course with the two biggest phenomenons in @NHL this year. YeSUV vs Spacey in Space #isles pic.twitter.com/C0T30vDqYC

Just think — as the Panthers prepare to host a playoff game against the Islanders this week, a serious question people are asking is, “Will Kevin Spacey be at the game?” WTF. WTF, indeed.

This was a bad idea from outset to execution. Kane, who had been accused of rape in the offseason, was at Blackhawks training camp and going to be subject to questions about it from the media. The organization decided to have a press conference in which Kane would read a statement, not really answer questions, then Blackhawks management would say a bunch of tone-deaf things about the matter.

Kane repeated he wanted to “respect the legal process” when he was given questions. He spent his time in front of the microphone ducking and dodging questions when he really should have left the podium after reading his prepared statement.

Team president John McDonough even referred to the team as “Camelot.”

1. Everything involving John Scott and the All-Star Game

If Kane was the low point, Scott winning the All-Star Game MVP was the high point.

Consider everything that involved in this exercise:

— A fan-driven voting campaign had to get Scott into the game, something the league has (almost definitely) submarined in the past, like when Rory Fitzpatrick mysteriously lost his spot in the voting in the last second in 2007. A conspiracy involving the league getting rid of an All-Star seemed more believable when…

— The Coyotes traded Scott to the Montreal Canadiens in a deal GM Marc Bergevin was literally unable to explain at the time. It was universally believed that by trading Scott out of the division, he would lose his spot at the All-Star Game.

— In a piece at The Players Tribune, Scott revealed that someone (almost definitely NHL director of hockey operations Colin Campbell) told him that by accepting the spot in the game, he would embarrass his children. Scott, like any of us would, gave the league the middle finger and refused to relinquish his spot.

— Scott, who is terrible at hockey, was named MVP as his Pacific Division team won the three-period tournament and the game was the highest-rated All-Star Game in the history of NBCSN.

— As if that wasn’t enough, Scott’s All-Star story will be made into a movie.

Feel free to call it, “WTF: The John Scott Story,” if you’d like, Hollywood.