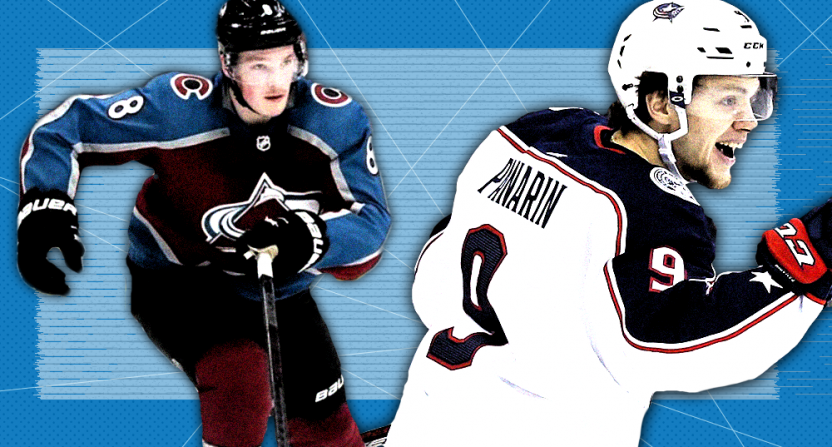 As the second round of the Stanley Cup playoffs reaches its midway point, the potential Final matchups have become clearer. While there are still 32 potential Stanley Cup Finals scenarios, three potential matchups stand out as the most exciting for the league and its fans.

Who doesn’t love an underdog story?

The Blue Jackets and the Avalanche barely snuck into the playoffs after capturing the last Wild Card spot in their respective conferences. From there, both teams pulled off shocking upsets in the first round. Columbus pulled off perhaps the unlikeliest sweep in NHL history after eliminating the 62-win Tampa Bay Lightning. Meanwhile, Colorado dispatched the top-seeded Flames in just five games.

The Blue Jackets making the Stanley Cup Final would be good for the league and sports in general. Before this season, the club never won a first-round series. By being aggressive at the trade deadline to bring in top talents like Matt Duchene and Ryan Dzingel to pair alongside a skilled roster featuring Artemi Panarin, Sergei Bobrovsky and Seth Jones, Columbus rewrote how a fringe playoff team should act. They went for it and are being rewarded with a Cinderella story playoff run.

Colorado started the season strong, but after an eight-game losing streak in mid-February, they appeared down and out. The Avs leapfrogged into the last Wild Card spot by winning eight of their last 11 games thanks to goalie Phillip Grubauer stealing the starting goalie job from Semyon Varlamov, and star forwards Nathan McKinnon and Gabriel Landeskog leading the charge. In Game 3 against the Flames, Cale Makar, the 2019 Hobey Baker winner and one of the best defensive prospects on the planet, joined the Avs and has been a consistent force despite making his NHL debut under intense circumstances.

The Blue Jackets have continued to play well beyond their seeding and lead the Bruins 2-1. Colorado is down 2-1 to the San Jose Sharks. It is unlikely both teams will make it all the way to the Stanley Cup Finals, but, if it happens, it would be refreshing and amazing to see both eight seeds go the distance.

On the flip side, the Bruins and Sharks would represent the best remaining teams battling it out for Lord Stanley.

The Bruins are an immensely skilled team with one of the best trios in hockey with Brad Marchand, David Pastrnak and Patrice Bergeron. Boston is top heavy but manage to have enough depth to provide the necessary balance for a competitive team. Goalie Tuukka Rask has been sublime backstopping the Bruins with 2.22 goals against average and .928 save percentage. With the Lightning out early, Boston remains as the best team in the East.

San Jose made the 2015-16 Stanley Cup Finals, losing to the Pittsburgh Penguins in six games. The Sharks are still searching for their first Cup and the current version of the team has enough high-end talent to potentially make it happen. Peter DeBoer’s squad is stacked with high-grade contributors, including Logan Couture, Brent Burns, Erik Karlsson, Tomas Hertl, Evander Kane, Joe Pavelski and 39-year-old future Hall of Famer Joe Thornton. They are a well-coached team with more than enough veteran talent.

Seeing Thornton potentially win his first Cup against the team that drafted him would be a great story. It would be one hell of a way to go out for Jumbo Joe.

Near the middle of the season, both the Hurricanes and Blues looked like fringe-contenders who probably could not overcome their shortcomings.

The Hurricanes fell two games under .500 in late-December after a loss to the New Jersey Devils. Around the exact same time, the Blues sat three games under .500 a month after firing head coach Mike Yeo. Both teams defied their seemingly grim playoff fate, however.

After consistently ranking among the lowest scoring teams in the NHL, the Hurricanes finally had luck bounce their way winning 21 of their final 25 games. Thanks to breakout seasons from Sebastian Aho and Teuvo Teravainen, plus the addition of Nino Niederreiter, Carolina finally shed their low-scoring ways. The ‘bunch of jerks’ upset the Stanley Cup defending Washington Capitals in round one and lead their series against the Islanders 2-0. The Hurricanes are a young, spunky group with serious depth. While there is not a superstar on their roster (the closest to that would be Aho) they roll four strong lines and three solid defensive pairs.

The Blues salvaged their season thanks to rookie goaltender Jordan Binnington going from decent AHL starter to full-blown legitimate starting goalie. The 25-year-old was sensational in 32 games, posting 24 wins and a 1.89 goals-against average and .927 save percentage. Binnington earned a Calder Trophy nomination despite appearing in relatively few games. In the playoffs, he has not lost a step, backstopping the Blues to a series win over the Winnipeg Jets and a 2-2 series tie against the Dallas Stars. St. Louis has had a wide range of postseason contributors, with Jaden Schwartz, Ryan O’Reilly, Alex Pietrangelo and Vladimir Tarasenko leading the way.

Both teams could have easily been written off, but they battled back to have great seasons and make the playoffs against the odds. Considering how well they have both played in the playoffs, it is quite possible to see this once unlikely Stanley Cup matchup happen.