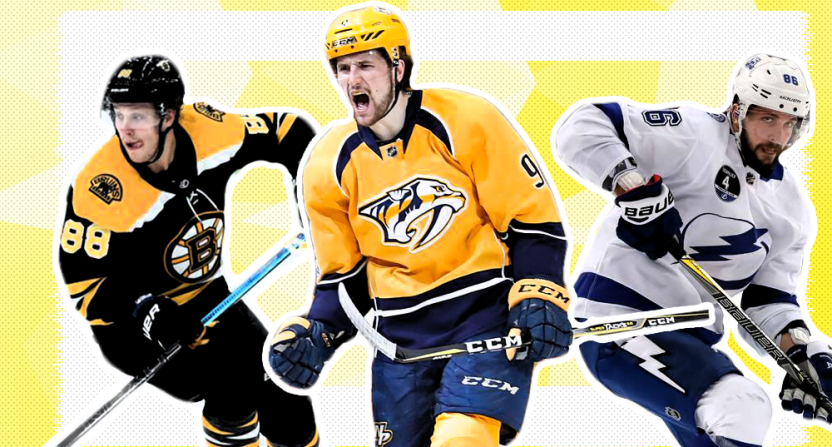 The first overall pick in the NHL Draft is one of the single best assets a team could have. With the selection, an organization can choose who they consider the best among the upcoming crop of talented young skaters and start fresh with a potential franchise player. Over the last decade, there have been 10 selections yielding different results. Some picks, like Edmonton taking Connor McDavid in 2015, were absolute no-brainers. Others, like New Jersey selecting Nico Hischier, aren’t as clear cut.

Taking a look back, who would be the top pick in the last 10 NHL drafts if they were redrafted today?

The New York Islanders didn’t necessarily make the wrong choice by selecting Tavares with the first pick. In nine seasons the Oshawa Generals alum averaged close to a point per game and became one of the best forwards in the game. But over the last decade, Hedman has become the better player. The 6’6″ defenseman is a two-time Norris Trophy nominee, winning the award in 2018. Despite his big frame, Hedman is an excellent skater who excels in all situations. He’s the best defenseman on hockey’s best team. His unique skill set puts him over the top.

Hall has stood out in a fairly strong draft crop, even with ongoing injury issues.

Hall ranked slightly ahead of Tyler Seguin as the projected top pick by scouting agencies after three great seasons with Windsor in the OHL. In six seasons with the Oilers, Hall hovered around a point-per-game pace.

In 2016-17, Edmonton traded Hall to the New Jersey Devils for defenseman Adam Larsson in one of the worst one-for-one deals in league history. He’d later win the Hart Trophy in his second full season in New Jersey. Hall has lived up to the hype.

Nugent-Hopkins has turned into a perfectly fine player, but if the 2011 NHL Draft was redrafted, he might not even be a top-five pick. In 523 games with Edmonton, the Red Deer Rebels product has consistently put up around 50 points per season. In comparison, Kucherov, who was snagged in the late second round, is in the middle of his second consecutive 100-point season in Tampa Bay’s high-powered offense. The Lightning couldn’t have anticipated getting so much value from Kucherov, but he has evolved into one of the most important players in the league.

Yakupov is the first bust on the list, but it’s not all his fault. After being selected first overall out of Sarnia, the Oilers completely screwed up Yakupov’s development. He never found his footing and was out of the league after just six seasons. Meanwhile, Forsberg has become a consistent 30-goal scorer and a leader for Nashville. He leads a weak draft class with 139 goals and 296 points.

Coming out of Halifax, MacKinnon was the clear-cut first overall pick. In his first four NHL seasons with the Avalanche, he never scored more than 63 points from 2013-2017, but over the last two years he’s stepped up his game and become a superstar. MacKinnon ranked second in league scoring with 97 points in 2017-18. In 2018-19, he’s got a great shot at 100 points for the first time. MacKinnon leads his draft class with 387 points. All he does is score. Colorado made the right choice.

Ekblad is a perfectly fine defenseman. But, if the Panthers got to choose again today, it would be surprising if they made him the top pick again considering the amount of skilled forwards to come out of the draft.

While there’s something to be said about Tampa Bay center Brayden Point (79th overall) exploding offensively this year and 40-goal scorer Leon Draisaitl (3rd overall) exceeding beside Connor McDavid, Pastrnak deserves the top spot. At 22, the highly-skilled Bruins winger has posted three-consecutive 30+ goal scoring seasons on mostly great Boston teams and is on pace for 40+ this season. Pastrnak is one of the most fun players to watch. He routinely makes goalies look silly.

McDavid was the most hyped prospect in the last decade for good reason. In three seasons as a teen in Erie, he put up robust scoring numbers and was dubbed the next Sidney Crosby. Those expectations might seem lofty, but McDavid has delivered on being the next great one. In his fourth season with Edmonton, McDavid is on pace for his third straight 100-point season. He’d likely post even gaudier numbers if the Oilers weren’t a complete mess. McDavid is the best player in the NHL. It’s honestly scary to think how good he’ll be at his peak.

Matthews’ hype wasn’t quite as loud as McDavid’s, but it’s fair to say he was the second-most coveted player on this list.

Matthews would land with the Toronto Maple Leafs, immediately establishing himself as a top goal scorer in the league. In his rookie season, he scored 40 times. In the last two years, he has scored at close to a 50-goal pace. Blessed with great hands and a big 6’3″ frame, Matthews was the no-doubt choice then and the no-doubt choice now. Patrik Laine (2nd overall) and Matthew Tkachuk (6th) have been stellar, but aren’t on the same level.

Hischier has turned into a fine pro immediately after being taken first overall, registering 52 points in 2017-18 and 44 points in 62 games in 2018-19. However, Pettersson’s emergence in Vancouver propels him to the first pick of a redraft.

In 56 games, Pettersson has led a surprisingly fun and competitive Vancouver Canucks team in scoring with 26 goals and 56 points. Despite being razor-thin at 6’3″ and 176 pounds, his puck-handling ability and skill have been revelatory. He might have the best dangles in the NHL. If he stays healthy, Pettersson will win the Calder Trophy as rookie of the year.

Buffalo landed the top pick at the perfect time, as the best player in the draft just so happened to be exactly what they needed. Dahlin, a skilled, puck-moving defenseman, has experienced ups-and-downs during his rookie season. Even so, he leads his draft class in scoring with 37 points in 66 games. For a Sabres team that’s been a nightmare defensively for the past few seasons, Dahlin has helped stabilize the backend and given them much-needed hope as a franchise.

Buffalo might miss the playoffs, but with Dahlin and Jack Eichel, there’s a clear path for the Sabres to become a very good team sooner than later.