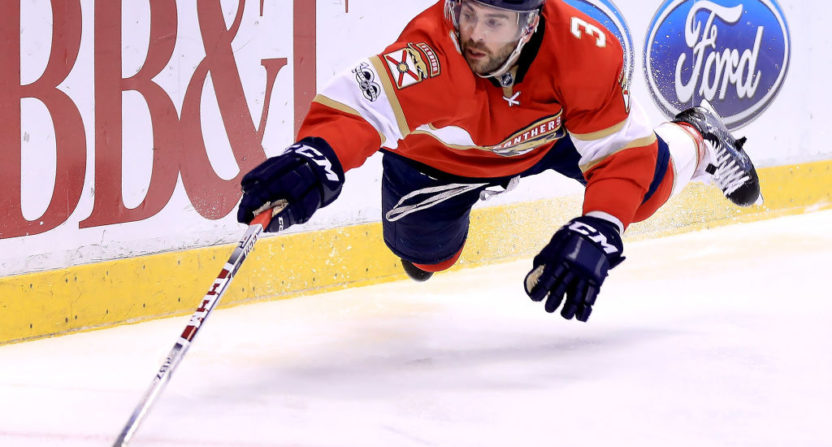 The 2017 NHL Expansion Draft is going to be fascinating for hockey fans, watching the Vegas Golden Knights completely alter every current roster. Heading into the draft, teams will be forced to decide which select group of players they want to protect and which group they’ll leave exposed – or vulnerable – to the Golden Knights as they make their selections.

With that in mind, most teams will have to leave at least a few notable names unprotected. Reportedly, two of those names are some fairly prominent defensemen – Keith Yandle and Dion Phaneuf.

Sportsnet’s Elliotte Friedman reports that both players have been asked to waive their no-move clauses, meaning that both the Florida Panthers and the Ottawa Senators could be looking to shake things up by leaving these two players exposed.

Here’s the speculation on Phaneuf from Friedman:

“At his season-ending media conference, Ottawa GM Pierre Dorion said the Senators “would discuss internally” the possibility of asking Dion Phaneuf to waive his no-move, adding, “If ever we were to go that direction, I think I should let Dion know first.”

Dorion isn’t commenting, but word is Phaneuf was indeed asked to waive. That would allow Ottawa to protect Cody Ceci, Erik Karlsson and Marc Methot.”

And his comments on the Yandle situation, which are far more interesting given it could signal a trade:

“Another interesting one I heard was Florida asking Keith Yandle to waive. That one raised eyebrows at the combine, because if Vegas wanted to take him and flip him, I think there would be a ton of interest, especially if the Golden Knights were willing to keep a little bit of his salary. But would he be willing to waive a year after signing? His call.”

The Golden Knights could assemble just about any type of team they want if they’re willing to put in the work to serve as the liaison between teams for trades. Should Yandle waive, the Golden Knights could take him, eat some salary and flip him to secure a package that might serve their ambitions a bit better.

That same approach could be used in several situations with several teams, including the rumored possibility that the Golden Knights could select Marc-Andre Fleury from the Pittsburgh Penguins and then flip him to a new club.

Will all of these rumors surrounding the Golden Knights and the expansion draft come true? We’ll find out in just a couple weeks.