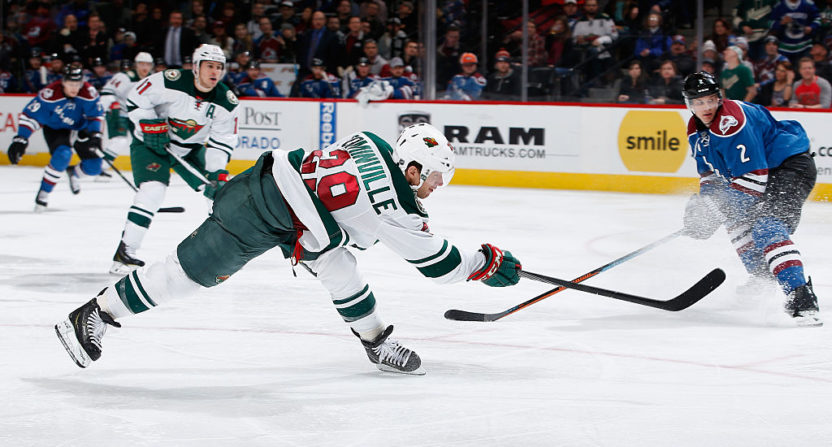 The Buffalo Sabres have acquired forward Jason Pominville, defenseman Marco Scandella and a third round pick from the Minnesota Wild in exchange for forwards Tyler Ennis, Marcus Foligno and a fourth round pick, as first reported by Bob McKenzie of TSN.ca.

No trade call done yet but assuming it proceeds without hiccups, it's Pominville and Scandella to BUF, Ennis and Foligno to MIN.

Michael Russo of the Minneapolis Star Tribune added that no money was retained in the trade. Both clubs later confirmed the deal.

Reacquiring former longtime captain Pominville plus Scandella, one of the most coveted defensemen on the open market, makes the deal an almost instant win for the Sabres.

New general manager Jason Botterill aggressively scoured the trade market since landing in Buffalo in hopes of improving a defense that finished 29th with a staggering 32.6 shots against per game at even strength. Before the draft, Buffalo brought in a top-four talent in Nathan Beaulieu from Montreal for a low-cost. And in this move, they’ve brought another talented top-four defenseman whose history of shot suppression should help reshape the Sabres backend.

Scandella is coming off a down season in Minnesota, posting just 13 points after previously hitting at least 20 in back-to-back seasons. At 6 feet 1 inch, he has both offensive and defensive upside and should immediately help Buffalo’s quest to keep shots down. While not an elite shot suppressor, Scandella is solid both ways and fits nicely into an improving d-core. The 27-year-old has a reasonable $4 million cap hit over the next three seasons.

Meanwhile requiring Pominville should appease longtime Sabres fans, even though he’s owed $11.2 million over the next two seasons. Pominville, 34, has enough offensive upside to fit into Buffalo’s middle-six and produce around 40-50 points. He’s more than a throw-in.

For the Wild, the deal is strictly about shedding salary. With the move, Minnesota saves $5 million against their cap for next season, giving them enough money to give new contracts to upcoming restricted free agent forwards Mikael Granlund and Nino Niederreiter. Furthermore, the move allows the Wild a tad more flexibility going forward.

Ennis, 27, is owed $4.6 million over the next two seasons. Unfortunately, his career has recently been plagued with injuries, as he’s only played 74 games over the past couple years. But before the injury streak he was back-to-back 20-goal scorer, so there’s a chance he could fill in a middle-six role in Minnesota.

Foligno is a nice depth piece. The 6-foot-3-inch left winger is an effective bottom-six forward with some scoring touch, posting 23 goals since the 2015-16 season. As a restricted free agent, he’s due for a raise, though it won’t come close to the $4 million owed to Scandella.

Minnesota’s reasoning for making this trade (cap considerations) is obvious, but the short-term winner here is unquestionable the Sabres. Adding a talented defender and a competent middle-six scorer for such little in return is a no-brainer. Botterill continues to show the acumen necessary to bring the Sabres back to respectability.