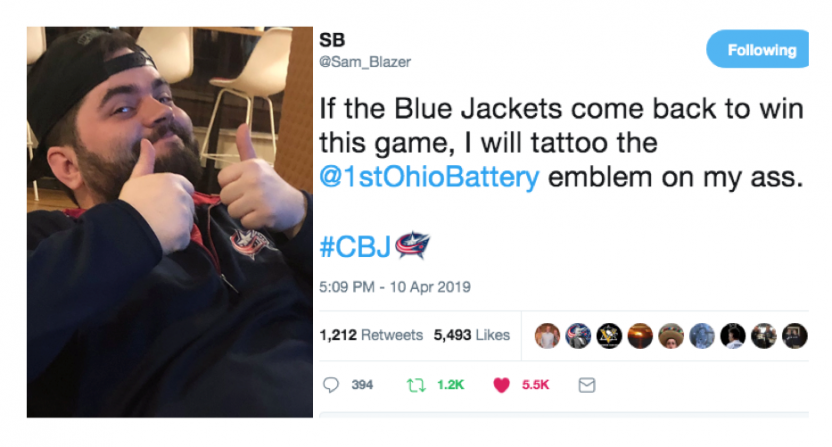 the I was lucky to catch it on Twitter.

If the Blue Jackets come back to win this game, I will tattoo the @1stOhioBattery emblem on my ass. #CBJ

Sam writes for this site. He’s a friend of mine. He lives a mile away from me, and he’s one of those guys who just has weird things keep happening to him. After seeing this tweet, I had a feeling this wasn’t going to end well for him.

For context, the Blue Jackets were on the road facing the Tampa Bay Lightning. They were eight seed in the Eastern Conference, while the Lightning were the one seed and coming off one of the best regular seasons in NHL history. The Lightning scored three straight first period goals, and Sam’s butt should have been okay. Four unanswered goals later, Sam is now internet-famous, and we had to check in on him.

Where were you, and who were you with, when you decided to fire off this now infamous tweet?

I was with the guys that I write with for 1st Ohio Battery (the Blue Jackets site Sam writes for). We were at a communal workspace, streaming the game on TV. We were joking how Game 1 was already over by the end of the 1st period. Another guy I write with, Kyle (Morrison), made a joke that if they came back to win, he would share the most ridiculous thing he had said on Slack. Naturally, I had to one up him with the ass tattoo bet.

What was your thinking at the time? Did you have any hesitancy about the tweet? What % chance did you think the Jackets had to come back?

I thought nothing of it at all. I had made two or three similar bets in our site’s Slack. None of them had ever come to fruition. Did I have any hesitancy? No, not at all. I had it at less than five percent that it was going to happen. 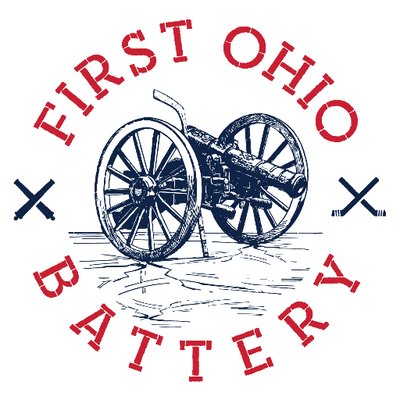 Have you ever gotten a tattoo before?  If so, where and what is it?

Nope, no tattoos for me. This will be my first.

When the Jackets scored the first goal, did you begin to have some mixed emotions about the comeback, or were you still fairly confident that they would lose?

At the time, I made a snide joke saying “uh oh, the comeback starts now!” Little did I know. I have a lot of faith in this Blue Jackets team, but this was a herculean effort for them to take down the Lightning. The fact that they did it in Game 1 was remarkable and a true testament to the team.

When they got the second goal, what were you thinking?

Down, but certainly not out.

The @BlueJacketsNHL clawed back from a 3-0 deficit to win 4-3 against the top-seeded squad. #StanleyCup pic.twitter.com/szFPfPLg80

Up until the tying goal, I thought it would be a good moral victory for the team. Then when they tied it up, I immediately turned into a ghost. I don’t think I have really recovered.

When did you realize you had gone viral? How worried were you that your newfound fame was going to corner you into getting a butt tattoo?

I knew it was viral when people that I don’t talk to started reaching out to me and were asking if I was going to get inked up. When it found the Barstool guys, that was when I knew this was going to get way too big. At that point, I felt like I had an obligation.

Do you know what tattoo shop you’ll get it at?

No, I don’t know where I will go to get it done, but I anticipate that I will do it at some point this weekend. I have had multiple people send me info about various shops around Columbus, Ohio.

Which butt cheek will you get it on?

It will likely be done on my right butt cheek.

I’m told your other boss will be paying for this. Is that at least a relief?

You know, I was with Jason Priestas (Eleven Warriors) at the time and I said that to him in jest. Now I need to pin him down and make sure he does take care of it.

What is the funniest response you’ve seen?

Does your family know at this point? Will they care?

My brothers know. I don’t think my parents know. They will undoubtedly care and are likely the only reason why I wouldn’t get it. But at this point, it is too funny and is solid #content. I need to follow through with this.

Do you regret it?

Nah. I am glad the Blue Jackets won and I was able to make some people happy in the meantime.

A best case scenario for you is what? The team tells you will get free seats if you follow through? The Jackets win the Cup? If that happens, do you think your ass should get a 30 for 30?

No clue. I expect absolutely nothing from it. If something comes to fruition because of it, that is just an added bonus. Just hope that the city of Columbus and the Blue Jackets continue to prosper. And yes, my ass should undoubtedly get a 30 for 30.

Before on 1st Ohio Battery, I said that they were going to lose the series. If I change it now, does that make me into a complete and utter turd? Probably. But they’re going to win in seven. The ass tattoo can’t be in vain.

Any advice for people in general?

The greatest risk in life is not taking one.

UPDATE: It just happened again, one year later. With the Blue Jackets trailing the Toronto Maple Leafs 3-0 in Game 3 of the Qualifying Round, Sam tweeted, “I’ll do another tattoo if they come back and win. Screw it. Life is short.”

The Blue Jackets came back and won 4-3.

I'll do another tattoo if they come back and win. Screw it. Life is short.

I really don't understand this power. Literally the shittiest power.

Also I really want to know what the likelihood of this happening twice is. It has to be so so small.

Sam already proved the first time that he’s a man of his word.