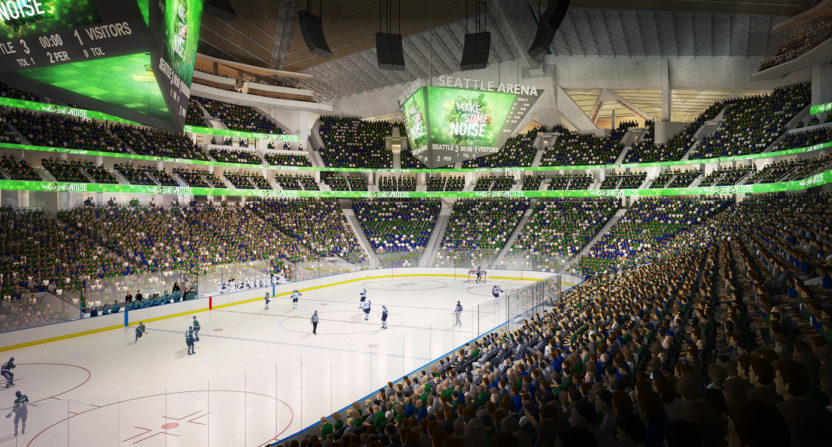 The door is now open for the NHL to expand to Seattle and possibly for the SuperSonics to return to the NBA. On Monday, the Seattle City Council approved a $600 million package to renovate KeyArena into a state-of-the-art venue. According to the Seattle Times, the Oak View Group hopes to begin construction next year and the project could be completed as early as October 2020:

The council voted 7-1 to approve a Memorandum of Understanding between the city and the Los Angeles-based Oak View Group to complete the renovation as early as October 2020.

The projected completion lines up perfectly with the start of the 2020-21 NHL and NBA seasons, and that’s probably not a coincidence. The Seattle Times reports the NHL is expected to make an announcement about adding an expansion team or moving an existing team within the next few months.

Here’s a rendering of how the arena will look from outside once it’s completed.

And here’s the inside for hockey games:

And the inside for basketball games:

For the last five years, entrepeneur Chris Hansen, with Russell Wilson’s support, had been trying to build a new arena in Seattle’s Sodo District. But that plan fell through when the city council shot down his request to purchase a portion of Occidental Avenue near the proposed arena site. Hansen offered to pay for the new arena completely on his own, but the council has not reviewed that offer.

Hansen’s group isn’t giving up yet. Here’s their statement to the Seattle Times:

“Today we remain steadfast in our goal to have the NBA once again playing in Seattle, so we will keep the land we own in Seattle’s Stadium District until that commitment has been made.

“Having two viable arena options puts Seattle in the best position to attract an NBA team. If some future NBA ownership group is unable to reach a competitive deal at Seattle Center, having an alternative is vital for the City and Sonics fans.”

KeyArena hasn’t been renovated since 1995. Although it hasn’t been home to a professional men’s sports team since the Sonics left in 2008, the WNBA’s Seattle Storm as well as Rat City Rollergirls of the women’s flat-track roller derby call the arena home.