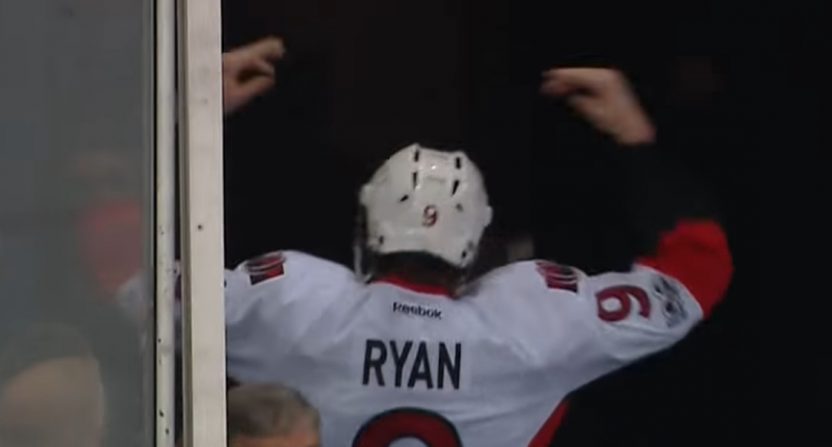 The series between the New York Rangers and Ottawa Senators is starting to heat up. Things got chippy in Game 4 as the Rangers held a commanding lead late in the third period. Facing an ugly defeat, Bobby Ryan tried to pick a fight with Dan Girardi and was ejected for his efforts.

On his way out, Ryan made sure to stir things up with the fans too.

Game 4 was a lopsided affair as the Rangers evened up the series at two wins a piece. The Rangers were able to rattle off four unanswered goals before the Senators finally lit the lamp for the first and only time midway through the third period.

As is apparently tradition in the NHL playoffs, lopsided games usually lead to lots of physical altercations as the clock winds down. In an effort to clamp down before anything got too serious, the officials kicked out several players which left the Ottawa bench pretty empty.

Senators fans will want to forget this game and move on, but there was a lot to worry about in this loss. The way the Senators imploded as the game wore on, capped off by Ryan’s taunts, show a shaky mental side of the game which Sens fans have to hope will be fixed upon the series shifting back to Ottawa.

Game 5 should be fun.