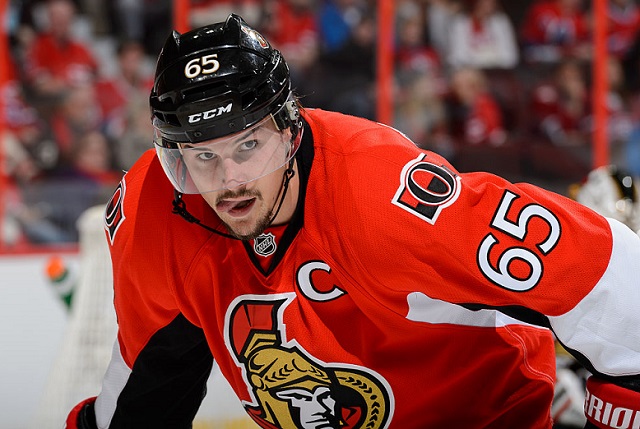 For the second time this week, a Canadian NHL team from the Atlantic Division has controversially traded its captain to a U.S. team in the Pacific Division. First, the Montreal Canadiens sent Max Pacioretty to the Vegas Golden Knights for Tomas Tatar, Nick Suzuki and a second-round pick, and now, the Ottawa Senators have traded Erik Karlsson to the San Jose Sharks (along with minor-leaguer Francis Perron) for a bunch of picks and less-prominent players.

This is just the latest chapter in what’s been a strange recent saga with Karlsson and the Senators. Ottawa drafted him 15th overall back in 2008, and he came over to North America in 2009, playing 60 NHL games for the Senators (with five goals and 21 assists in that span) and 12 more games for their AHL affiliate in Binghamton that first season. And he became an even bigger star after that, notching 13 goals and 32 assists in 2011-12 and then posting over 60 points in every season since then (except 2012-13, which saw both a NHL lockout and then a 10-week injury for Karlsson), winning the James Norris Memorial Trophy as the NHL’s top defenseman in 2012 and 2015, and being named the team’s captain in October 2014.

However, things have been rockier between the sides lately. The Senators made it to the conference finals in 2016-17, but went just 28-43-11 last year and missed the playoffs, and they weren’t able to get the 28-year-old Karlsson (heading into in the last year of a seven-year contract paying him $6.5 million annually) to agree to a contract extension. There was also further drama this summer when Karlsson’s wife Melinda filed a court protection order against the girlfriend of one of Karlsson’s then-teammates, Mike Hoffman, over alleged cyberbullying; Hoffman was traded soon afterwards, but that situation probably didn’t help the Karlsson-Senators relationship.

And rumors about a Karlsson trade have been circling for much of the summer, especially with the Senators’ comments about rebuilding around younger players, which they stated earlier this week in the most hilariously awkward video ever. That video features owner Eugene Melnyk in conversation with defenseman Mark Borowiecki, and it sees Melnyk saying “Right now, we’re kind of in the dumpster,” dismissing conversations of franchise relocation that he himself started.), and talking about a rebuild with “10 out of the 22 players [that] are going to be new”:

The Ottawa Senators are proud to share the vision for the future of our team and this organization. We are about to launch an exciting plan to rebuild our team and we are inviting you to be a part of our rise to new heights. #OttawaRising pic.twitter.com/hok2jYCUVi

Well, this will certainly help the Senators boost the numbers of new players on their roster. But it’s debatable if this particular trade makes much sense for them. Yes, they’re bringing in four guys and at least two picks, but none of those players seem to have the ceiling of Karlsson, and the Sharks are good enough (and even better with Karlsson) that those picks will likely be pretty far down in the first and second rounds. Sure, they might eventually hit on those picks, or they might have one of the players they’re acquiring turn into an unexpected star, but this seems to be making a bunch of relatively longshot bets and hoping one will pay off rather than going for one or two particularly hot prospects that might be more likely to shine. It’s notable that in a league with roster limits and limits as to how many people you can play at one time, three threes do not equal one nine.

And there was definitely a wide market of interest in Karlsson out there. Of course, that is limited by his modified no-trade clause, but it seems like even if they absolutely had to trade Karlsson, there might have been other packages that made more sense. But it’s also not even clear that they had to trade Karlsson; yes, they want to rebuild, but he’s only 28, and it’s not clear that he was going to force his way out at all costs. Offering him a ton of money on a long-term deal to stick around and lead through the rebuild would have carried risks of its own, but it might have helped them retain a player who may well be worth much more than anything they got in return for him.

Meanwhile, this looks like a great move for the Sharks, and one that should further boost their aims of contending again this season. They went 45-27-10 last year, finishing sixth in the conference, and then swept the Anaheim Ducks in the first round before losing to the eventual Western Conference champion Vegas Golden Knights. Karlsson makes them even better, and while they gave up a fair bit for him, none of the players they’re sending the other way have exactly been crucial for them so far. Tierney and DeMelo were on the Sharks’ roster last season, recording 40 and 20 points respectively (17 goals, 23 assists for Tierney, no goals and 20 assists for DeMelo), while Norris was a first-round pick (19th overall) last season and Balcers was the 142nd overall pick in 2015. The picks they’re sending are a loss, but an acceptable one, and the price only goes up with conditional picks if the Sharks are able to sign Karlsson to an extension (which would make this a huge win for them anyway) or if they trade him back to an Eastern Conference team this year (which is unlikely, but they could do it for enough to overcome that penalty).

There’s always some uncertainty with trades, of course, and just because the Sharks are getting the best player in the deal right now doesn’t mean that will work out in the long run. Maybe Karlsson gets hurt or underperforms (before or after they sign him to an extension), and maybe one of the players or picks sent the other way becomes a bonafide star. A case in point is the infamous 1992 Eric Lindros trade, which wound up playing a key role in the creation of the Colorado Avalanche dynasty and didn’t work out too well for the Flyers; however, that deal looks so lopsided in hindsight largely thanks to Lindros’ concussions (not predictable at the time), and it should also be noted that that was a deal made for a player who hadn’t yet played in the NHL, not an already-existing star like Karlsson. Maybe someone Ottawa’s getting here will become a star, and maybe this will be remembered as a key moment for them. But for now, it sure seems like San Jose came out ahead.