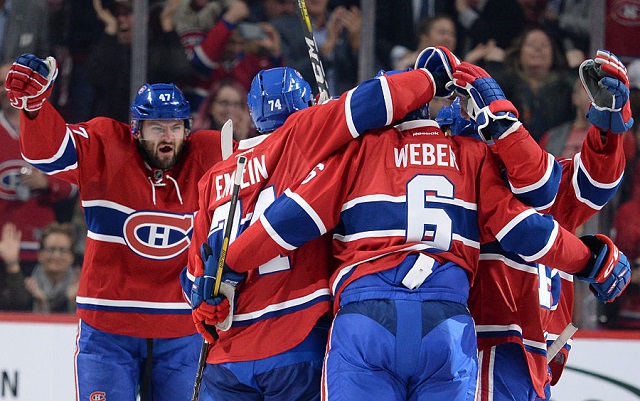 Just minutes after ripping a blistering slap-shot past New York Islanders goalie Thomas Greiss for the game-winning power play goal with 2:57 left in regulation, Montreal Canadiens superstar defenseman Shea Weber stood in front of his locker at Brooklyn’s Barclays Center with no discernible expression on his face.

Thanks in large part to Weber’s stellar start, Montreal is the only NHL team without a regulation loss, at 7-0-1, with a +16 goal differential that’s six goals clear of the next best team. Weber leads the sport in plus/minus at +12 and is tied for the league lead in points for a defenseman with nine. Yet this is what he had to say when asked about his early contributions for the Habs:

“Good team effort,” Weber told The Comeback, “everybody doing the right things consistently throughout the lineup.”

Montreal leads the NHL in goals scored (29) and is second in goals allowed— 13, one more than New Jersey, who’s played two fewer games— and Weber’s seamless transition to a new team and new environment is a large contributing factor.

Give Hamonic credit for attempting to block Shea Weber’s BLAST & Did U #LipRead Bailey’s ‘F*ck Me’ lol @peteralper99 pic.twitter.com/U7eHTEaMZn

“It’s an easy group to fit in with,” Weber said. “It’s still early, but we’ve done some good things so far.”

Weber’s had to fit in with a new group for the first time in his career, after the June trade from Nashville that sent P.K. Subban to the Predators, causing shockwaves throughout the hockey world in the most significant one-for-one player swap in recent memory.

“I’m just happy to be in a situation where I can excel and feel good about myself coming to the rink every day,” Subban told reporters after the trade, referencing a longstanding clash between his flashy personality and the more traditional, buttoned-up style the Original Six Canadiens seemingly prefer.

Weber, 31, fits into Montreal’s approach stylistically on the ice as well.

And here was the insanely warm welcome Shea Weber received. He'll do just fine with this crowd. #TSN690 pic.twitter.com/NaC05APLAe

“What I’m the most impressed about him is his defensive game,” said Canadiens head coach Michel Therrien, whose penalty kill is fourth in the league in terms of percentage. “Yes, he could shoot the puck and he’s good on the power play, but he’s a tough guy to play against. He’s playing against their top guys almost every shift, so we like what we’ve seen from him since the beginning of the year.”

Though the Montreal power play has been towards the middle of the pack statistically thus fa— Subban’s Nashville unit ironically leads the league in man-advantage goals through Thursday’s games — it’s helped lead the team to wins over playoff teams on consecutive nights.

“The power play should be a difference maker; the penalty kill, same thing,” Weber said. “You have to be able to win your team games [on special teams] at times.”

One night after Weber’s power-play tally won the game against the conference semifinalist Islanders, an Alex Galchenyuk PP goal at home against Tampa Bay on Thursday night was part of a three-goal third period rally to defeat the division rival Lightning.

“We know as the year goes on, it’s something we’re going to have to lean on,” said Montreal forward and alternate captain Brendan Gallagher, who’s been incredibly impressed with Weber’s contributions on the power play.

“It’s a weapon that certainly teams have to be aware of,” Gallagher said. “When you already have an extra guy on the ice and teams have to overcompensate for something like that, it’s going to open everyone up. So we try to get him the puck as much as we can.”

After years of having to face Weber twice a year in the Western Conference — his 108.1 miles per hour slap-shot won the annual All-Star Game hardest shot contest held last year in Nashville, of all places — forward Paul Byron is happy he doesn’t have to penalty kill against him anymore.

“I know how dangerous that shot is,” Byron told The Comeback. “Every time a team goes up against him, they know that he’s one of the most dangerous guys on the ice. To have him on your team is definitely a positive.”

Weber is never going to have an 80-point season like Ottawa defenseman Erik Karlsson, Byron said, but with that dangerous shot of his, Weber is going to get plenty of opportunities on the point for Therrien’s power play units.

Shea Weber scored the winner on a PP to lift Montreal over the Islanders 3-2 tonight in Brooklyn pic.twitter.com/FQvfDBy2xz

But Montreal’s strength still lies in its defense, which has been bolstered by the stalwart play of backup goaltender Al Montoya, who’s 3-0-1 this season with a 1.47 goals against average.

“He’s been steady for us,” Gallagher said. “Game after game, we have confidence playing in front of him.”

And yet despite the Habs’ amazing start, they’ve been in this position before. Montreal has now won seven of its first eight games for three straight seasons, the first team to do this in league history. Last year, the Canadiens squandered the fast start and finished at .500, 11 points short of the East’s final playoff spot.

Perhaps that’s why Weber showed no emotion in front of his Brooklyn locker, knowing that what happens over a team’s first eight games is not necessarily a harbinger for season-long success.

“Just gotta keep winning games,” he said. “It doesn’t mean anything if you lose two, three in a row. You’ve gotta keep going and get better every night.”

An even-keeled statement like that is one of the many reasons why Montreal traded for Weber in the first place. His lethally hard power play goals certainly don’t hurt either.