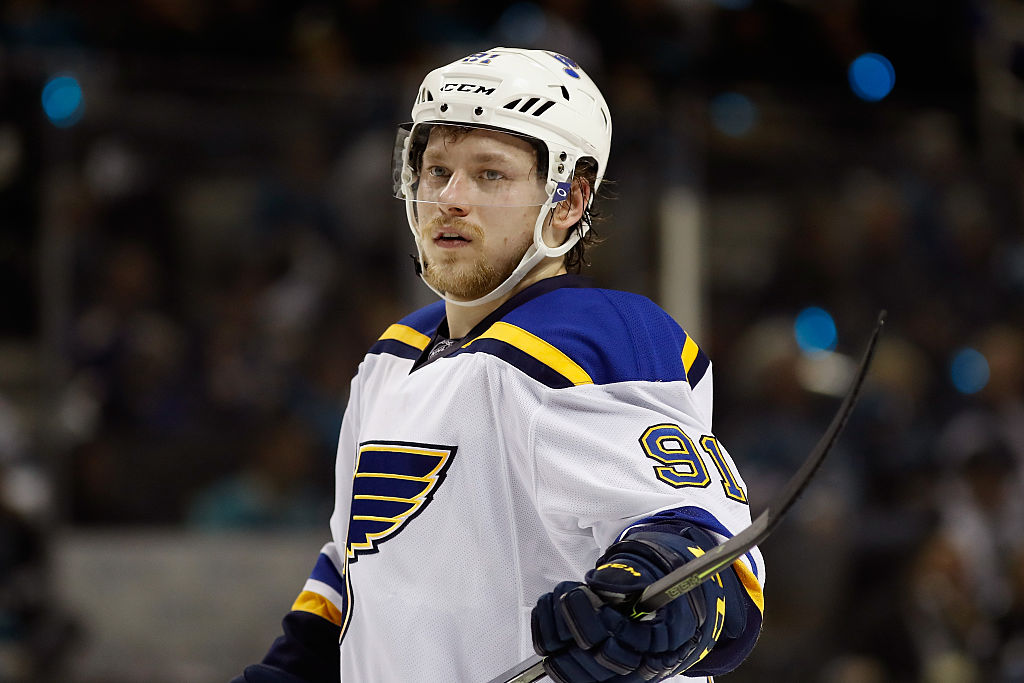 What are the three favorite things among hockey writers and media types?

• Free food, preferably buffet, preferably with a dessert cart.
• Telling anyone and everyone about their hotel and airline points.
• Blaming a postseason series loss on one player.

The first two are harmless enough, although nobody — and I mean NOBODY — cares about your status with Marriott. Oh, you were platinum but because of a seven-game road trip, you were upgraded to silver? Can you tell us about your fantasy football team too? Do you have a eight-minute video of your child at a dance recital? Because you should post all these things to Facebook where we can all ignore them.

But knifing one guy because his team lost in the playoffs? Everyone enjoys that. Heck, that’s about 80 percent of postseason hockey writing.

The latest example of this phenomenon? Vladimir Tarasenko of the St. Louis Blues, who lost in six games to the San Jose Sharks in the Western Conference Finals.

It took me a while, but I finally called out an athlete in St. Louis. Time for Tarasenko to show up https://t.co/a1ZaURaUlH via @stltoday

Let’s first examine this series. Tarasenko wasn’t good. In fact, he was bad. Six games, two points, two goals late in Game 6 that could not have been more meaningless if they were an online petition to get the blue Sour Patch Kid removed from the bag.

No matter the possession metric, it was dreadful. Even he was playing hurt, there’s no getting around one of the Blues’ best players — if not their best player — failing to play anywhere near his potential.

Also, he’s not why the Blues lost the series.

In Game 5, with the series tied 2-2, the Blues scored three goals. The third-highest scoring team in the playoffs averages 2.94 goals per game, so three is plenty for a team to win most nights. But on this night, for reasons that will escape scientists for decades to come, coach Ken Hitchcock went away from Brian Elliott for a second straight game and started an inferior goaltender in Jake Allen, who allowed four goals in the loss.

In the other three losses, Tarasenko had no points (until those two garbage time goals Wednesday). You know who else had no points in those games before Tarasenko turned a 4-0 game into a 5-2 loss? LITERALLY EVERY MEMBER OF THE ST. LOUIS BLUES HOCKEY CLUB. The final scores of those losses: 4-0, 3-0, 5-2. Tarasenko, in theory, could have scored nine goals in those games and it wouldn’t have mattered because everyone else was either as or more useless than him.

It's a seven-goal game and Tarasenko hasn't come close to scoring one.
Pointless in series.

If stats aren’t your thing, what about the ol’ eye test? Didn’t the Blues look like they were skating in cement during the series?

Since the NHL expanded the first round from five to seven games in 1987, one team — the 2014 Los Angeles Kings — won a third-round series after needing 14 games to get through the first two rounds. That weird-ass Kings team won their conference finals series in seven games too, before beating the New York Rangers in five games, three of which went to overtime. They were the luckiest great team in sports history.

The Blues played 14 grueling games over the first two rounds this year while the Sharks enjoyed a relatively easy five-game win in the first round before winning in seven games in the second round. The Blues, who weren’t in the class of the 2014 Kings, looked every bit like an already slow team made even slower by the grind of the first two rounds.

It’s easy to look at one series in a vacuum while ignoring everything that happened immediately before it. Actually, when you think about it, it’s extremely difficult to forget things that happened so recently and may be a sign that a visit with a neurologist is needed.

Forget about the cumulative effect on an entire team when it comes to the first two rounds. Those 14 games can also serve as an example of how insane it is to pin a third-round loss on Tarasenko.

Somebody just told Tarasenko it's the regular season…

Tarasenko was everywhere over the first rounds and the Blues still barely got past their opponents. Now in the third round, when he’s without a point for 5.9 games, the Blues get outclassed and go home in six games. Can’t you conclude that the Blues may be relying on one player too much and that the team as a whole isn’t quite as good?

What about the fact that Tarasenko had six games over the first rounds without a point and the Blues went 4-2 in those contests? And one of those losses came in double overtime when the Blues scored three goals? Nobody was blaming Tarasenko for anything then, because the other 18 players were pulling their weight.

The problem with going below the surface of the Tarasenko narrative is two-fold:

1. It requires the arduous work of reading a few player game logs, and really, who has time for that?

2. Apologies to my employer, but you are way more likely to share the hot take that blames Tarasenko because you either earnestly believe this to be true or you want to pass it around to your friends to mock it. Let it be known right now — if it drives traffic to this web site, please feel free to openly mock everything in this story that fails to question the heart or grit or character of Tarasenko because this story isn’t going to click itself.

Hockey would be so much easier to write about if it were football or basketball. If LeBron James takes five straight dumps in the NBA Finals and the Cleveland Cavaliers lose in five games, yeah, the guy who plays like 40 of 48 minutes in a 9-on-9ish sport probably single-handedly blew it. If Tom Brady throws five interceptions, you can pin that Super Bowl loss directly on his forehead.

Hockey is more or less 19 vs. 19 every night. The best offensive player maybe plays one-third of the game. The Penguins beat the Capitals in the second round and it’s quite possible Sidney Crosby and Evgeni Malkin called in sick for all six games. When the Rangers reached the Cup Final against the Kings in 2014, Rick Nash was declared legally dead when he had zero goals through two rounds.

It’s the mother of all clichés, but hockey is a team sport. And in Blues vs. Sharks, the obviously better team won.