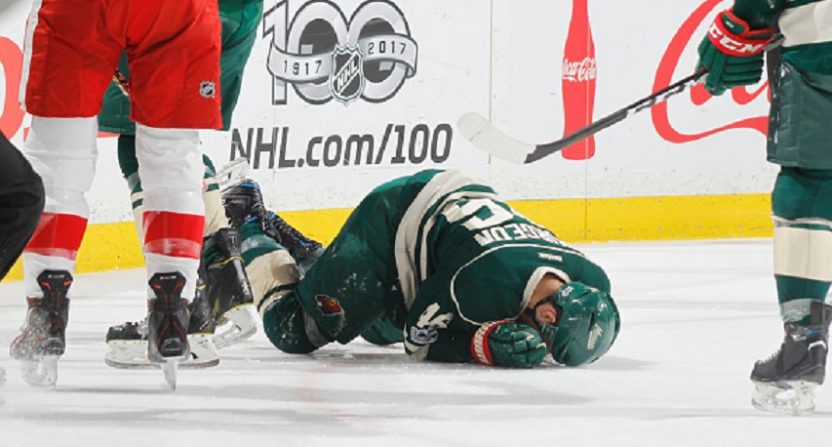 The National Hockey League suspended Detroit’s Gustav Nyquist six games for a high stick to the face of Minnesota’s Jared Spuregon. This was met with outrage ranging from mild to “wetting my pants so thoroughly that they are no longer flammable due to the moistness.”

The NHL’s Department of Player Safety screwed up again, they said.

Wrong. DOPS is a perfect, flawless institution that picked the perfect amount of games to suspend someone for jabbing their stick within centimeters of an opponent’s ocular cavity.

Six games. Nailed it. Stop questioning the NHL’s brilliance all the time.

What can an argument for more games be? That Nyquist could have potentially ended Spurgeon’s career by carving out Spurgeon’s eye like something out of a scene from a Youngblood/Minority Report mashup and he did so intentionally and out of anger? Wrong again, simpleton with no hockey experience like everyone at DOPS. You just don’t understand the game like they do.

There’s an obvious explanation for Nyquist’s actions that only a group of ex-players and long-time hockey watchers could understand.

Nyquist said during his hearing that he wasn’t attempting to blind his opponent because he hit him first. He was simply trying to get his stick around Spurgeon so he could cross-check him in the back. He didn’t cock back as far as he could and deliver an accurate, vicious blow to Spurgeon’s face. He was simply unable to properly position his stick for a retaliatory, yet controlled, blow. As we all know, careful calculation is common in acts of revenge in the heat of the moment.

You’re probably saying it’s impossible for a group of highly intelligent adults to buy Nyquist’s excuse, that it’s a ridiculous justification that no one would believe. Wrong again, buddy. The NHL bought it, not because DOPS is always looking for a way out of levying meaningful punishment for severe acts, but because Nyquist’s tale is very convincing to the ears of smart hockey people, which you are not. If you had played the game, you would know that when you’re in a fit of rage, your reaction is measured and, in a way, it’s Spurgeon’s fault for having a face, eyes and being so close to Nyquist in the first place.

The question you should be asking is — why didn’t the NHL suspend Spurgeon for making Nyquist do this?

Another thing that you, the pitiable hockey fan doesn’t understand that DOPS does: precedence. Nyquist’s suspension had to be six games. Why? Because when Duncan Keith hit Minnesota’s Charlie Coyle in the face in a similar incident in March 2016, that was deemed to be worth six games. If one stick to the face is worth six games, all sticks to the face are worth six games. That’s just how things work. Precedent had been set.

Or maybe all Wild faces are worth six games. That’s tough to say.

What’s that? You have another question? God, what is it? Oh, you don’t understand how the DOPS is forced to honor precedent of a too-weak suspension since it was DOPS that established that precedent in the first place? Why are they beholden to a number that they themselves set less than a year ago?

Hockey is about tradition. It’s not about change or thinking outside the box. You’d understand that if you ever played the game. You should stick to basketball or tennis or go watch figure skating if you don’t like it. This is a league that thinks having a defensive player put his stick down in the faceoff circle first is a revolutionary way of transforming the sport. Six games last year. Six games this year. Six games next year.

But what about the word “safety” in the department’s title? Doesn’t that mean something? If six games wasn’t a deterrent one year ago, shouldn’t they have added a few more games to the incident this year? Six didn’t enter the mind of Nyquist when he intentionally … oh, sorry … accidentally hit Spurgeon in the face while attempting to execute an honest, well-meaning martial arts move with a hockey stick.

Finally, you’re probably looking to show off that law degree you earned. You want to let me know that what Nyquist did to Spurgeon constitutes second-degree assault in Minnesota, since the act had a stick, which was an “object that is used in such a way that is calculated to produce death or great bodily harm.”

Sure, death wasn’t a possible outcome but “great bodily harm” was, so how does an act that carries a sentence of at least seven years only result in a six-game punishment?

Hey, idiot: It’s the National Hockey LEAGUE, not the National Hockey LAW. An NHL rink is made of ice, which is frozen water, and has people from all over the world on it, which makes it international waters, which means the laws of the state of Minnesota do not apply here. Nyquist could have ritually sacrificed Spurgeon to the god of lingonberries and opened a casino with underage dealers and monkey knife fights, and at most that’s a 15-game suspension. Probably closer to 10. Eight at the least, assuming the league could keep some of the casino money and not apply it to hockey-related revenue.

The NHL said six games is what Nyquist deserved, so six games is what he deserved. Stop trying to outthink the league that gave us the Guardian Project and Four Line Challenge at this year’s All-Star Game. They know what’s best. You don’t. And the sooner you understand the league knows what’s best for you, the sooner you will understand what it means to be a fan of the NHL.