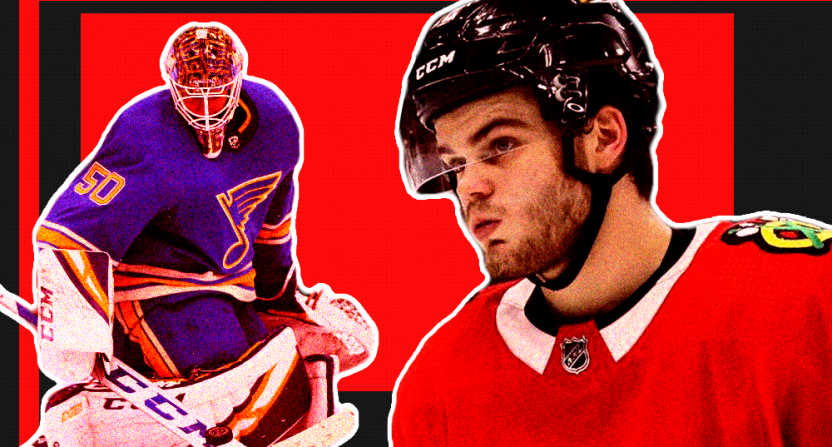 Balancing expectations can be tricky. Teams want to see improvements from all of their players, but not everyone can take the next step forward. Naturally, some players get better, some get worse, and some stay largely the same. For five players, they have completely crushed expectations in 2018-19. Here are the six of the biggest surprise performers at each position:

The Toronto Maple Leafs are a supremely talented offensive team with superstar forwards in John Tavares and Auston Matthews, but Marner deserves the same recognition as his All-Star peers. He has broken out into a top scorer in the league much sooner than expected.

Marner continues to be a gifted playmaker and a great skater. After posting 61 and 69 points in his first two years in the league, he leads the Leafs and sits 13th in the NHL in scoring with 85 points in 73 games. Even more remarkably, 63 points have come at even strength. He has an outside chance at being the first Maple Leaf to hit the 100-point plateau since Doug Gilmour in 1993-94. Marner has done nothing but produce points in 2018-19, and has established himself as a vital contributor for Toronto and one of the best young players in the NHL.

Tampa Bay has put on a clinic on how to draft and develop productive NHLers, and Point is proof at just how good they are at doing so.

Drafted 79th overall in the 2014 NHL Entry Draft out of Moose Jaw, Point joined the Lightning in 2016-17. Following a strong season where he scored 32 goals and earned a reputation as one of the best defensive forwards in the game, Point turned things up a notch this season. In 71 games, he has scored 38 goals, 49 assists, and 87 points – the latter being the ninth-highest mark in the league. Point has been the perfect fit alongside NHL scoring leader Nikita Kucherov, and has provided incredible value considering where he was drafted.

Point is the real deal. He has become an integral piece for the best team in the NHL in quick order.

DeBrincat has quickly made 29 other teams regret passing on him after he slipped to the second round in the 2016 NHL Entry Draft. The 5’7″, 165-pounder showed off immediate scoring prowess in his rookie season with 28 goals. In 2018-19, DeBrincat has become one of the best goal scorers in the league. He’s currently tied for fifth in the NHL with 38 goals.

DeBrincat plays big for a guy so small. He has a great shot and release, and won’t stop filling the back of the net any time soon. Chicago’s contending window might be over, but DeBrincat has given the Blackhawks a much-needed young player to build around going forward.

Gustafsson has been another stand-out in a rocky season in Chicago. In his first full season as an NHL regular, the 27-year-old has come out of nowhere to be one of the most offensively productive defensemen in the league. In 69 games, Gustafsson has 14 goals, 37 assists, and 51 points. To emphasize how out of left field the former Oilers draft pick’s season has gone, his previous career-high was just 16 points. He’s been a staple on the Blackhawks’ power play.

It’s important to note Gustaffson isn’t great in his own zone. In fact, he’s a liability. But his defensive shortcomings can be easily overlooked considering his offensive production. For a guy who was an AHL regular just two seasons ago, he’s sure made a name for himself as a pro.

In his second season in the league, Dunn has been a big part of a high-scoring Blues defense. After potting just five goals in 2017-18, Dunn has already more than doubled his production with 11 this season, while chipping in 31 points.

The 22-year-old has played a variety of roles for the Blues, and while he isn’t perfect in his own end, he’s shown a defensive responsibility with an impressive 55.6 shots for percentage. St. Louis has smartly sheltered Dunn in an offensive role, and he’s responded with a great season. Don’t expect Dunn to win a Norris Trophy in his career, but he’s shown he’s a good second pair defenseman with offensive upside.

The Blues’ season seemed on the brink when shaky goaltending pushed the team’s record to 10-14-4 with an embarrassing 6-1 loss to the Vancouver Canucks in early December. St. Louis recalled Binnington after that, and under a month later, they started him. Since then, their season has been saved and the 25-year-old netminder is the reason why.

In 25 games, Binnington has posted 18 wins, 4 losses, and 1 OTL, along with a 1.78 goals against average and a .930 save percentage. It’s not unrealistic to suggest he has been one of the best goalies in the league since he was called up. Binnington has gone from AHLer to NHL starter in short order and has thrown his hat into the rookie of the year race. Can he sustain his success? That remains to be seen. But, Binnington has made one hell of an impression for the Blues.