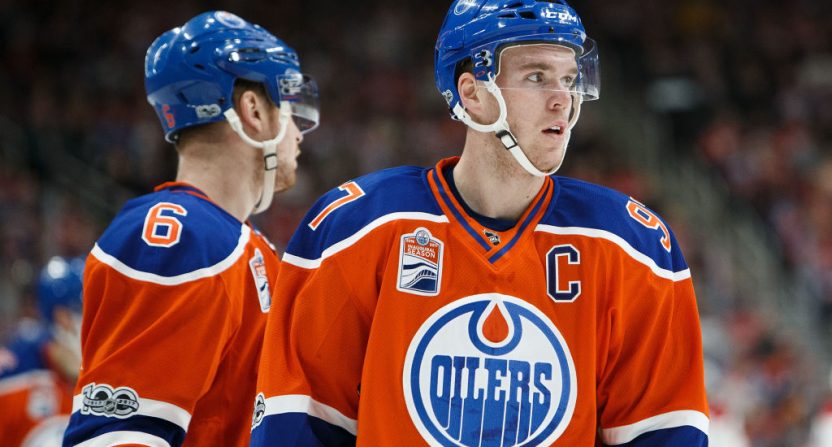 The Stanley Cup Playoffs have been pared down to eight teams, and with four second-round series on tap, there’s quite a bit to look forward to. That includes matchups that should probably be seen in the conference finals, but we’ve already taken our swings at the NHL’s playoff format.

Connor McDavid and the latest edition of Sidney Crosby vs. Alex Ovechkin are among the best storylines to track in the second round. But there is also way more to sink your teeth into beyond that. What should you be on the lookout for in round two? Let’s take a look at each of the NHL’s second-round playoff series.

Connor McDavid was great in the Oilers’ first-round series against the San Jose Sharks with four points. Leon Draisatl found a way to score an important goal after spearing an opponent in the nuts. Cam Talbot rebounded from a horrific Game 4 to almost entirely shut down the Sharks beyond that. For all of the flaws in the construction of this team, the Oilers are still very good.

After dethroning the defending Western Conference champs, they now take on another standard bearer of the flag out West in the Anaheim Ducks. Can the Oilers repeat many of their first-round performances against a veteran and experience-laden team? Can McDavid escape Ryan Kesler shadowing him every minute? Are the Ducks going to be able to use their full compliment of blue-liners instead of just youngsters playing above their heads?

Most young, up-and-coming teams have to experience playoff disappointment before taking that next step and winning the Cup. Sidney Crosby’s Penguins went through it, the Blackhawks of modern vintage went through it, and so too did Gretzky’s dynastic Oilers teams of the 80s. McDavid’s Oilers have great expectations, but is this the series where they are taught a few lessons by the veteran hands of a team that has been there and done that multiple times already?

If they can, then there might not be much stopping them out West. But it feels like this is where the Oilers’ current run ends, while learning important lessons along the way that they use to win in the future.

Is Jake Allen going to continue being a brick wall? Almost no one thought the Blues goaltender could do what he did against the Minnesota Wild by pretty much singlehandedly eliminating them from the postseason. The Blues were not the better team against Minnesota, but with a hot and confident goalie, they nearly swept the Wild and still made them look feeble. But against the super-confident Predators, who just slayed their personal dragon, can he pull off the same trick?

Nashville wins with speed and breaking the puck out of their own zone. Will the Blues be able to defend that better than the Blackhawks could? Can Pekka Rinne continue to be good enough to let the team in front of him own the show? Can the Predators’ line of Forsberg-Johansen-Arvidsson continue to dominate the way they have been?

Most of the questions in this series come down to whether Allen can replicate his first-round performance. If he can’t, then that leaves a big opening for the Preds to exploit. If Allen does continue to channel Dominik Hasek, then most of what I’ve just written really doesn’t matter. After trading Kevin Shattenkirk to Washington, most expected the Blues to be content with making the playoffs. But once you have a hot hand between the pipes, anything really is possible.

Thanks to the Wild Card, this is the weirdest second-round series we have. The Rangers escaped elimination at the hands of a team whose offense went missing, but with Henrik Lundqvist being the King again and getting timely scoring from up and down the lineup, the Rangers found a way out of dodge. The Ottawa Senators were fortunate to take on a Bruins team entirely decimated by injuries and exploited that with three wins in OT as the B’s broke down. But this is a considerably tougher task for an Ottawa team that wasn’t exactly the league’s best throughout the regular season.

Erik Karlsson is going to be playing in this series hurt, and since he’s pretty much the Ottawa Senators by himself, that’s an advantage for the relatively healthy Rangers. If he can be superhuman and play through a fractured foot, then the Sens have a chance because he’s around. If he’s not 100 percent, they don’t have much of a shot.

Neither team was an offensive juggernaut in their first-round series, so whichever team finds and rides a hot hand probably wins. And don’t forget the dynamic of Mika Zibanejad and Derick Brassard facing off against their former teams in this series, with both playing key roles in the first round.

The Rangers are the favorites, which means the pressure is on them more than it was against Montreal. If they deal well with the pressure, it’s going to be a relatively easy series for them. If not, Ottawa is more than good enough to pounce.

It’s Crosby vs. Ovechkin part three in the playoffs, and quite possibly the last chance for the Caps as presently constructed to exorcise their demons. There’s no doubt the Capitals have the talent and ability to beat the Penguins, but that has never been in doubt. All of the pressure once again resides on the Caps’ shoulders, and whether they win this series is predicated on getting out of their own heads.

Everything for Washington comes down to their mental state. If things begin to go wrong, do they let those demons creep back into their head? Can they fight back against that inevitable sense of doubt they’ll no doubt have to stare down at some point in this series? They managed to do so against Toronto and still find a way past a talented and fast team.

But the Leafs were green to the playoffs. These Penguins are a well-oiled machine. It doesn’t matter who is injured for them; they’ll just find someone to plug in and off they go. However, in this series, do players like Conor Sheary and Jake Guentzel step up another level, and is this the series where Pittsburgh finally misses the genius of Kris Letang on the blueline?

If this is the year for the Washington Capitals to win the Cup and put the narratives, doubt and demons away, it would be incredibly fitting to beat their personal nemesis and defending Stanley Cup Champions to do it. And while the Caps are going to be a standard bearer in the Eastern Conference after this season, they will look a bit different. So with this group as presently constructed, this is it. They have the tools everywhere. They have the experience and they have the horses.

Watch what happens when the Capitals first really face adversity in this series. How they respond will determine whether they win, or whether the same narrative is written about them again.