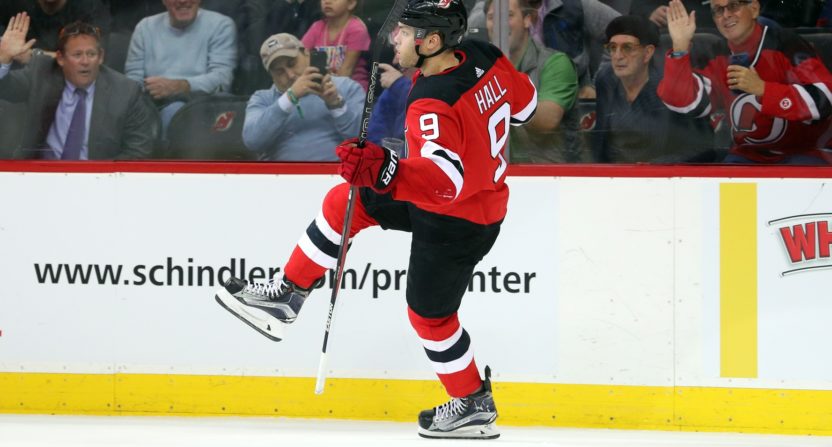 The 82-game regular season of the National Hockey League has come to a close. It has produced plenty of storylines and raised a lot of eyebrows. The Vegas Golden Knights, New Jersey Devils and Colorado Avalanche have all taken the league by surprise. All have been led by amazing performances that will impact both the NHL awards and the impending playoffs.

Here is your must-watch player guide for the 2018 Stanley Cup playoffs:

The former first overall pick in 2010 has had a tumultuous career thus far. It hasn’t been due to poor play; in fact, it is mostly based on the war of words in Edmonton media. After being traded from the Edmonton Oilers for defenseman Adam Larsson, many in Western Canada wanted to declare the Oilers’ the winner of the trade. They couldn’t be more wrong.

The Devils forward set career-highs in goals, assists, and points. Hall did all of this despite not playing a full season. Posting well over a point per game season, Hall was already considered a star, but after dragging his team to the playoffs, he is on another level.

Similarly to Hall, MacKinnon is the forgotten superstar. He has skill on top of skill, once receiving comparisons to Pittsburgh Penguins center Sidney Crosby. This year, he played on a talented line with Gabriel Landeskog and Mikko Rantanen and all three made the most of one another’s talents. It didn’t matter who they put up against the line; they were able to get theirs no matter what.

The Colorado Avalanche were one of the worst teams last season and were almost singlehandedly carried by MacKinnon and co. this year. It will be a two-man race when it comes to the Hart Trophy and MacKinnon will have a definite claim to it.

Over the past couple seasons, the Columbus Blue Jackets have been a completely solid, if not spectacular team. They didn’t have any game-breaking players but instead a workmanlike performance from each player. Insert Artemi Panarin from the Chicago Blackhawks, and the Blue Jackets have a superstar, something they haven’t had since Rick Nash was traded away.

There was uncertainty whether Panarin would be able to score on the same level without Patrick Kane on his line. He has shattered that with new career highs in assists and points. If the Blue Jackets go far during the playoffs, it will be because of Panarin.

What else can you say about Crosby? The Penguins are looking to three-peat, and it will need to be on his back. He shows no signs of slowing down, and with Evgeni Malkin and Phil Kessel shooting on all cylinders, they are as offensively talented as ever.

It feels like the generational players in hockey are being churned out more and more, but there is only one Sidney Crosby. He continues to perform at a high level and take his teams far. There is a reason he is considered to be one of the best.

Despite his horrible beard, Laine is a player to watch simply for his incredible shot. It doesn’t matter the goaltender he goes up against. It doesn’t matter the distance in which he shoots the puck. He can get it past anyone making him all the more impressive. The Winnipeg Jets will need him at his best as they try to get out of the first round since they rejoined the league.

The team has offensive firepower on all four lines, but all it means is that Laine should have room to work his magic. If he gets hot, as he tends to do, he can take the Jets very far.

The only defenseman on this list, Subban is one of the most polarizing players in the league. Not because of his play, instead it is because of his big personality. In a league that wants to prioritize the team over the player, Subban bucks those norms.

He leads a talented Nashville Predators team that has a real chance to capture the Stanley Cup this year. If any player, in particular, is made for the limelight in this league, it would be Subban. He can do it all as a defenseman, and the Predators will need him every step of the way.

A castaway from the Columbus Blue Jackets during the recent expansion, Karlsson didn’t come into the year with high expectations. High shooting percentage and all, Karlsson and the Vegas Golden Knights have been the surprise of the year. They are breaking records like no other team in sports history. Karlsson leads the way, and his 40+ goals will be needed for them to have any sort of run.

Perhaps the most underrated star in the league, Kopitar offensively and defensively is almost unmatched (Hello, Patrice Bergeron). He will lead a Los Angeles Kings club that isn’t on the same level as prior iterations but will get an interesting draw facing the Golden Knights in the first round. At over a point per game, Kopitar is peaking at just the right time.

The hope for Kings’ fans is that they can stay healthy and hopefully recreate old magic. No one expects anything from them, and that is exactly how the Kings’ succeeded in the past.

Outside of Connor McDavid, Matthews is the most exciting young player in the league. He has almost limitless potential, and he is surrounded by young players with similar skillsets. In hockey-crazed Toronto, it doesn’t look like he is ever phased. That is an essential attribute for a player that will carry an entire town on his shoulders.

He makes every play look effortless and has the star power to make a play at a moments notice. The Maple Leafs are going to need Matthews at his best and at 20-years-old, it will be a lot to ask.

As a player on the Tampa Bay Lightning, Kucherov is a star on a team chock filled with them. You look at each line and each defensive pairing; there are plenty of name brand players. Kucherov hit the 100 point mark this season, and it wasn’t as a passenger. All he does is put pucks in the back of the net. It doesn’t matter if it is him or his teammates, Kucherov always has a hand in it.

The Lightning are an Eastern Conference power. Kucherov is a key part of it. He won’t get mentioned in the upper echelon of players, yet needs to be watched to be believed. He is fantastic and is the engine for the team’s offense. Hopefully, this postseason comes with more notoriety.