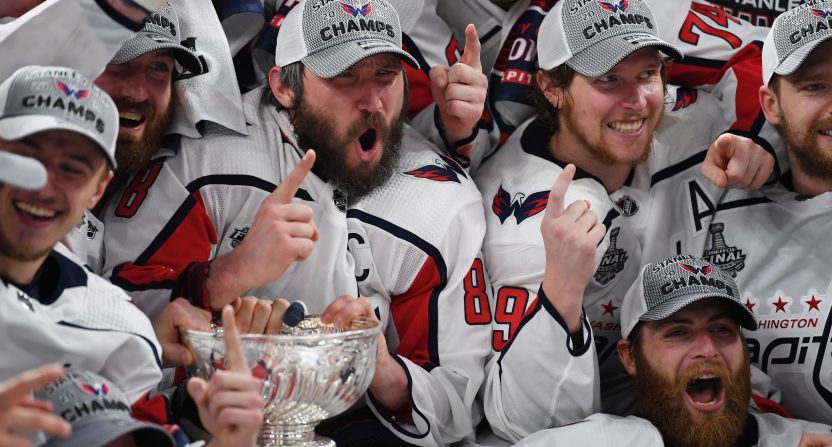 In the last weeks of 2019, The Comeback is taking a look back at the 2010s in every major professional sport, reminiscing on the biggest moments and pondering the trends and changes that will take hold entering the 2020s. We’ve done the NBA already. Today, we’re diving into the NHL.

The 2010s was at once a transitional period and a blossoming for the NHL. They moved past the dead puck era of the early 2000s and the stigma of the full-season lockout from 2005. High-scoring superstars emerged, and juggernauts were formed. A collection of elite teams found success for large portions of the decade, displaying for the rest of the league how best to approach roster-building.

We also saw the reign of Sidney Crosby, who has been the league’s best player for more than 10 years. Had it not been for his concussion debacle, he would have even better stats. He realistically had no peers until Connor McDavid — Crosby 2.0 — entered his stratosphere. It is satisfying knowing that we get another decade of dominance from a transcendent ice-shifter after Crosby retires. We get to enjoy the overlap now.

In more general terms, analytics started to take hold and the sport changed with new developments.

We’ll get to all of it. Let’s start with the success stories and the Stanley Cups:

The nine-year stretch from 2009-17 produced just four Stanley Cup winners: the Pittsburgh Penguins (three times), the Chicago Blackhawks (three), the LA Kings (two), and the Boston Bruins (one). That first Penguins Cup in 2009 doesn’t count as part of this decade, but it’s clear that a handful of teams dominated the league about as much as any small group can dominate in this cap-structured NHL.

The Blackhawks won in 2010, 2013, and 2015, led by a core featuring Patrick Kane, Jonathan Toews, Duncan Keith, Brent Seabrook, and Corey Crawford. Joel Quenneville coached them, and they racked up the awards; Keith won a pair of Norris Trophies, and Kane won a Hart. They were the only team of the 2010s to win a Presidents’ Trophy and the Stanley Cup in the same season. Their frantic comeback in Game 6 of the 2013 Cup against Boston was remarkable.

Though Kane and Toews are still 31, Chicago have regressed the past couple of seasons, dealing with a problematic salary cap and aging players. (Seabrook, 34, is due nearly $7 million in average annual value until 2024.) Quenneville now coaches the Florida Panthers.

Pittsburgh, Chicago’s Eastern Conference counterpart by the measure of championships and top-tier forwards, will likely not see its window close until Crosby and Evgeni Malkin show their age. Secondary stars like Jake Guentzel have emerged; those players are crucial to sustainability. Brandon Saad fit that archetype for the Blackhawks, and someone like Dustin Brown could be seen as the Kings’ version.

Crosby has won nearly everything a hockey player can win. He nearly added a Selke Trophy for best defensive forward last year. Malkin has his own individual accolades, and has a history of dominating when Crosby is out (in part thanks to the improved players he gets to play with). Kris Letang would have at least one Norris if not for a long list of injuries. Crosby’s concussion issues robbed him and the Penguins of two potential Cup years.

LA won in 2012 and 2014, with Anze Kopitar driving play — Kopitar hung close to a point-per-game pace and also won two Selkes. Jeff Carter starred and Drew Doughty was (and is) elite. Jonathan Quick backstopped, flailing everywhere to save pucks.

The Bruins went 1-2 in Cups, losing to Chicago and the St. Louis Blues. Patrice Bergeron (who might as well be the namesake of the Selke Trophy), Zdeno Chara, and Brad Marchand have been the constants. David Pastrnak, still 23, emerged later in the decade and has formed a dominant first line with Bergeron and Marchand, carrying Boston to last year’s Cup finals. Tuukka Rask has been the goalie for most of the decade, though it was Tim Thomas who won the 2011 Cup.

The Washington Capitals and the Blues ended the streak of the same teams winning in the last two years of the decade. The Caps deserve a mention among the best teams of the 2010s, considering their ever-present contention. They won two Presidents’ Trophies and saw Alexander Ovechkin pile on the goals, to the point where he should be considered the greatest scorer in league history.

In 2018, Washington excised their Penguins demons and finally beat an exhausted Pittsburgh in the second round, eventually cruising past the Vegas Golden Knights in the Cup Final. Niklas Backstrom is perpetually underrated as the Caps’ first line center.

We haven’t seen huge direct ramifications of analytics in hockey just yet compared to the way we have in other sports. The changes that have taken place and will take place in the future will be more subtle.

For example, goalies shouldn’t play on back-to-back nights. In fact, it is more advantageous if you rest your starter at least 20 times in a season, if not more, as ESPN’s Dimtri Filipovic has explored. The Athletic’s analytics czar Dom Luszczyszyn has outlined the case for teams giving their top power play unit more time to work, maximizing the man advantage. It is generally better to pull your goalie earlier when you’re trailing late, given the likelihood of scoring on a 6-on-5.

With the influx of reliable shot quality stats, we place more value on how effective shots are, instead of simply saying “get the puck to the net” and leaving it at that. Shots from the point, as you might expect, aren’t very high-percentage, considering the distance from goal and amount of players who might block the shot. Research suggests that shots that come directly from passes across the so-called Royal Road — an imaginary line through the center of the ice from goal-to-goal — are significantly more likely to go in. In addition to forcing movement from goalies, these shots come from positive passages of play.

Dump the puck in less — entering with control is too valuable to mindlessly stick the puck in the corner. Puck-moving defenseman are good and valuable. (Some teams — hint, those that employ Jack Johnson, Erik Gudbranson, and Cody Ceci — haven’t learned.) These sentiments won’t go away, and smart teams will capitalize on them.

Hockey is a sport that loves to tout how old-fashioned it is. For example, Mike Milbury has a job as a prominent analyst on NBC telecasts. We’re not at the point where NHL broadcasts (at least in America) use analytics to any real extent. It feels like there is often a dearth of quality hockey analysis, both on TV and on the web. Too many talk and write in generic terms, often appearing as though they haven’t actually watched much hockey. The NBA has seen significant growth in smart, in-depth analysis while hockey hasn’t and that is hurting the common fans’ understanding of the game.

Hopefully we see improvement in that area soon. A couple of writers mentioned above (specifically Luszczyszyn and Filipovic, who are big stats guys but also write like they’ve actually watched and analyzed real hockey games) are very much worth reading.

There remains a certain amount of diversity in teams’ styles of play. Some play fast — the Cup-winning Penguins and the Stamkos-Kucherov Lightning as examples — while others hunker down and play a more defensive style, like the 2017 Ottawa Senators and every Barry Trotz team.

Randomness abounds in the NHL more than in other leagues. Goaltending is massively important, and we know that goalies are extremely volatile. These factors make hockey slightly less pleasing to analyze — there are too many variables that we can’t truly pinpoint, so results sometimes verge on unexplainable.

That doesn’t necessarily make hockey less fun to watch, of course. Superstars stand out. Playing fast is entertaining. We’re getting better at finding concrete reasons for things, and coming up with better ways to analyze the game. It will be exciting to see how hockey makes progress, ever so slowly, in the 2020s.