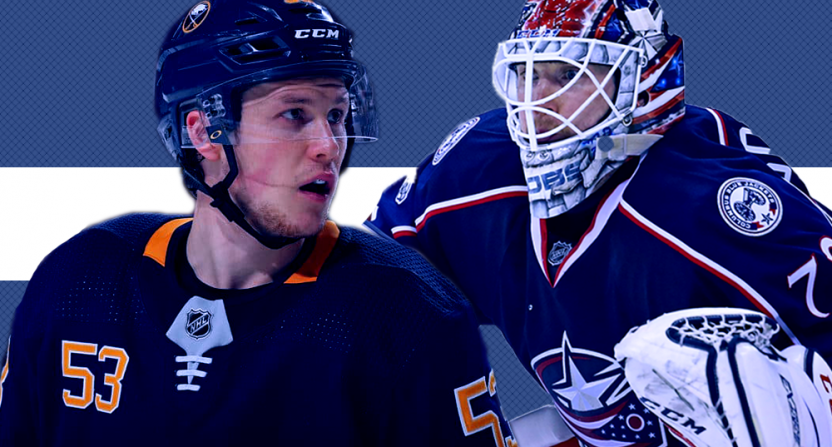 Soon after the completion of the Stanley Cup Final, attention will be shifted towards the offseason as players with expiring contracts will hit the open market as free agents. The 2019 class is strong with numerous high-end, all-star caliber players set to become available. Here are the biggest free agents this summer.

Bobrovsky, the 2017 Vezina Trophy winner, is about as good of a candidate as there is to join a new team in free agency. Throughout the season, the Blue Jackets dealt with rumors Bobrovsky would split with the team this summer. After Columbus’ surprise playoff success, Bobrovsky listed his Ohio condo for sale. Meanwhile, reports suggested Bobrovsky and Panarin, the Blue Jackets’ top scorer, would look for package deals this offseason.

#CBJ GM Jarmo Kekalainen says whole team was in meeting with Sergei Bobrovsky today. Says it’s important to resolve issues via face-to-face discussion. Would still like to re-sign Bobrovsky in offseason. “Sometimes you can use these types of things to get tighter as a group.”

Bobrovsky is a top goaltender in the NHL. In 2018-19, he posted a 37-24-1 record, with 2.58 goals against average and a .913 save percentage. He was even better in the postseason.  Meanwhile, Panarin led the Blue Jackets in scoring with 28 goals, 58 assists and 87 points in 79 games, while also leading the team with 11 postseason points.

Columbus would be in a tough situation to lose their starting goalie and top scorer, but at this point, it does not appear their relationship with the team is good enough to retain either star. Perhaps things change,but for now, reports suggest a breakup is happening. Both players will command huge salaries and make immediate impacts on whatever team they end up on.

The Buffalo Sabres fleeced the Carolina Hurricanes last summer, dealing a second-round pick and prospect Cliff Pu for one year of Skinner. In his first season in Buffalo, the two-time all-star had a career-best season, scoring 40 goals, 23 assists, and 63 points as one of the few bright spots on an otherwise mediocre Sabres’ team. Skinner is a bonafide scorer who proved to be an ideal fit alongside franchise star Jack Eichel.

Despite winning just 33 games, the Sabres and Skinner proved to be a great match. Buffalo finished as one of the lowest scoring teams in the league and desperately need as many goal scorers as possible. Bringing Skinner back in the fold, regardless of cost, should be a top priority for the Sabres this offseason. But if he doesn’t return to Buffalo, there will be plenty of teams happy to bring in someone who scored 40 goals.

Karlsson had a dramatic summer in Ottawa in 2018, as the superstar defenseman hung around with the organization until getting traded in mid-September to the San Jose Sharks. His first season with San Jose was largely a success. After a slow start, Karlsson posted 45 points in 53 games, missing time late in the season with a groin injury. While he managed 16 points in 19 games in the postseason, Karlsson hobbled his way through the playoffs, and the Sharks were eventually eliminated in the Western Conference Final in six games against the St. Louis Blues.

Getting healthy this summer will be huge for Karlsson, but regardless of his current injury status, he can expect big contract offers in free agency. A player of Karlsson’s caliber does not hit the free agent market often. He is a two-time Norris Trophy winner, capable of averaging a point-per-game on the blueline while in his prime. He should earn the offseason’s biggest contract.

Duchene has consistently been a steady point-producer in the NHL, but his lack of playoff success seemed to overshadow anything he did in the regular season. In 2018-19, Duchene had a strong season, posting 30 goals and a 70-point season (split between the Senators and Blue Jackets). In his first serious postseason run, Duchene elevated his game.  He was a huge catalyst in Columbus’ four-game sweep against the Lightning, scoring three times and chipping in seven total points. Against Boston, he added another two goals in six games.

Duchene is hitting free agency at the right time. He is a top-line center who is just hitting his prime. For a team in search of a 30-goal scorer on a long-term deal, Duchene is a good gamble to make. At 28, he still has room to grow.

Despite approaching his mid-30’s, Pavelski has proven to be one of the NHL’s top goal scorers. The longtime Sharks captain has scored 20+ goals in six straight seasons and has scored at least 35 goals four times in that span. Unfortunately, Pavelski’s postseason was derailed after suffering an injury in the first round against the Golden Knights. He missed most of the second round against Colorado and missed the key game six against the Blues.

While many teams would surely be willing to offer Pavelski a two or three-year deal, the chances he leaves San Jose are minuscule. He has spent his entire career with the Sharks and has publicly expressed he would like to be back with the team. Unless negotiations go awry, it would be no surprise for the Sharks to retain Pavelski. What remains to be determined is what kind of contract he will demand in his mid-30’s and how that will affect San Jose’s other free agency plans.