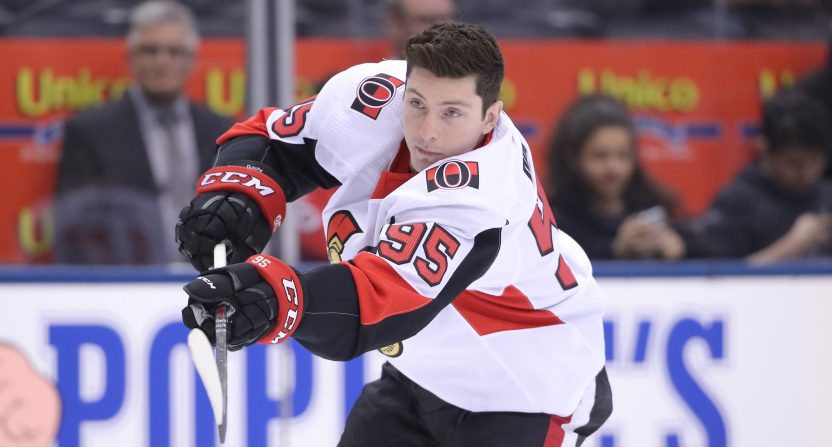 With the trade deadline just a few days away, we’ve got our first blockbuster deal.

The Columbus Blue Jackets have acquired Matt Duchene and Julius Bergman from the Ottawa Senators in exchange for prospects Vitaly Abramov and Jonathan Davidsson, a first-round pick, and a conditional first-round pick if Duchene re-signs.

#CBJ have acquired Matt Duchene from Ottawa #Sens. Prospects Abramov and Davidsson part of the deal, but more coming from #CBJ

I believe it’s a first rounder, Abramov and Davidsson for Duchene and Bergman plus a conditional first to OTT if Duchene signs in CBJ.

Columbus pulling the trigger to acquire a star player of Duchene’s caliber is a good indication they’re going all-in this season.

Duchene is having a career-best season despite the Senators having the worst record in the NHL. The 28-year-old center scored 27 goals, 31 assists, and 58 points in 50 games for Ottawa. Duchene is a top-line talent and gives the Blue Jackets another dynamic offensive player alongside left winger Artemi Panarin, right winger Cam Atkinson, and center Pierre Luc-Dubois.

With the uncertainty surrounding Panarin and goaltender Sergei Bobrovsky’s upcoming free agency, GM Jarmo Kekalainen decided this group might not be around next season and swung a huge deal to get Columbus, currently one point out of the playoff picture, into the postseason for a potential Stanley Cup run. Giving up a first-round pick and a couple of decent prospects is about right in terms of Duchene’s value. He also serves as an excellent backup option if the team plans on trading Panarin before Monday.

For the Senators, the deal was about salvaging a sunken cost. Ottawa acquired Duchene last season in a three-way trade which cost them multiple assets, including a first-round pick and Kyle Turris. Losing that first-round pick, which has a decent chance of becoming first overall, was a massive loss. So, while GM Pierre Dorion deserves blame for getting rid of his best asset, he should get props for maximizing the return for Duchene.

The Senators had little chance of re-signing Duchene, who will become a free agent at season’s end. Flipping him and getting a desperately needed first-round pick alongside more prospects to start building a future core is a win. Abramov is a high-end prospect struggling in his first professional season in North America. The 20-year-old right winger has played 52 games for the Cleveland Monsters, scoring 12 goals, 10 assists, and 22 points. Davidsson, a 21-year-old right winger, is currently playing in Sweden with Djuagardens IF, where he’s posted 10 goals, 10 assists, and 20 points in 35 games. Both will be valuable additions to Ottawa’s weak prospect pool.

It’s the rare big trade where both teams win. Duchene is a great fit and a big addition for Columbus, and should help them secure a playoff spot. If he doesn’t work out, they can let him walk in free agency and being the rebuilding process. If he does fit, they can sign him and keep him in the organization for the foreseeable future. For the Sens, getting a pair of prospects and a first-round pick is exactly how they needed this deal to pan out. While they paid too much for Duchene in the first place, they sold him for just the right price.