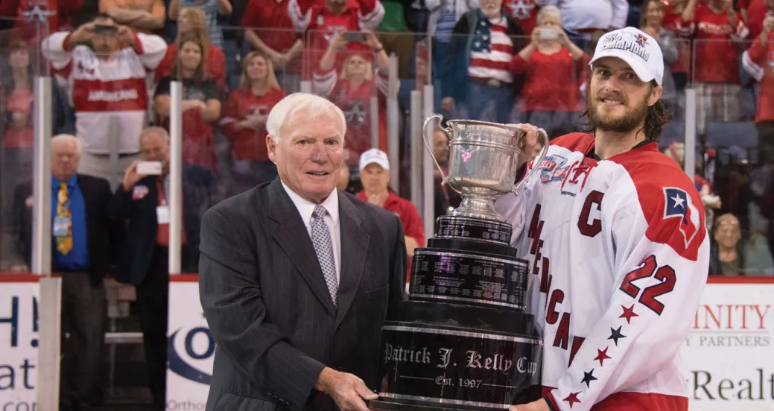 It’s certainly not an everyday occurrence to see a team and a league feuding over a championship trophy, but that’s what’s going on with the Colorado Eagles and the East Coast Hockey League (where the Eagles don’t even play these days). The Eagles won the Patrick J. Kelly Cup (awarded to the league champion since 1997) for the second consecutive time in the 2017-18 season, beating the Florida Everblades in seven games, but then moved up to the American Hockey League this offseason. And Kelly (the ECHL commissioner emeritus the trophy is named after) told Toledo radio station Fox Sports 1230 Friday that the Eagles didn’t return the trophy, leading to the league making a new one for the winner of this year’s final between the Toledo Walleye and the Newfoundland Growlers. Here’s a recap of Kelly’s comments from Mark Monroe of The Toledo Blade:

Kelly, who served as the ECHL’s commissioner from 1988-96, told Anthony Bellino, the host of Fox Morning Blitz, the Colorado organization still had the original trophy.

“Colorado kept the trophy. If you can believe it,” Kelly told the show. “They still have it. I’ve never heard of this in the history of hockey. They won it two years in a row and one of their owners said, “Fine. We’ll keep it.”

On Friday night, the Eagles shot back with a statement of their own, via Matt L. Stephens of The Denver Post:

The Eagles on Friday night confirmed to The Denver Post that they do have Kelly Cup and that it’s “safe” and in “pristine condition” somewhere in Colorado, and that it’s still in its case. The team would not comment about why the cup was still in its possession. One potential reason could be a dispute regarding exit fees for leaving the league.

“The management of the ECHL has full knowledge of the situation with the Kelly Cup. We have made numerous attempts to return it. They have chosen to ignore our requests, therefore the Kelly Cup remains in Colorado. This is all that will be released regarding this matter,” team owner Martin Lind said in a prepared statement.

Meanwhile, the ECHL itself put out a statement Saturday saying they made a new trophy after the Eagles didn’t return the old one:

Despite a confirmed plan with Eagles’ management to return the Kelly Cup to the ECHL in December 2018, the arrangement was not fulfilled.

In reaction to this, the League created a new Kelly Cup, complete with the history of players, coaches, and staff that have earned ECHL Championships over the past 30 years, including the inscription of ‘Patrick J. Kelly’ on the Cup itself to honor the man that is the trophy’s namesake.  This Cup represents the fourth Kelly Cup in ECHL history, with the older models enshrined in the Hockey Hall of Fame in Toronto.

If the Colorado Eagles do intend to return the Kelly Cup, the ECHL welcomes its return so that it too may be a part of hockey history.

There are plenty of twists and turns there, and it’s unclear just what went wrong with the “attempts to return it.” But this is definitely an unusual situation; the NHL’s Stanley Cup has been held for ransom by thieves on at least two occasions, as has the CFL’s Grey Cup (which also saw a team refusing to return it way back in 1912), but a team electing not to return a trophy is pretty unusual in today’s era. As Bruce Boudreau (currently the head coach of the NHL’s Minnesota Wild, he won the Kelly Cup as the coach of the ECHL’s Mississippi SeaWolves in 1999) told Stephen Whyno of The Associated Press, that’s just not done:

“I thought you were only allowed to have it for the summer, then you have to return it. That’s what we did. Yeah, give it back. Like, it’s not yours, man.”

At least the ECHL has a new trophy, though, and that will go to the winner of the Walleye-Growlers series. Game 6 is Tuesday night; the Growlers lead 3-2 after a Walleye win Saturday night.

[The Associated Press; photo from the ECHL site]