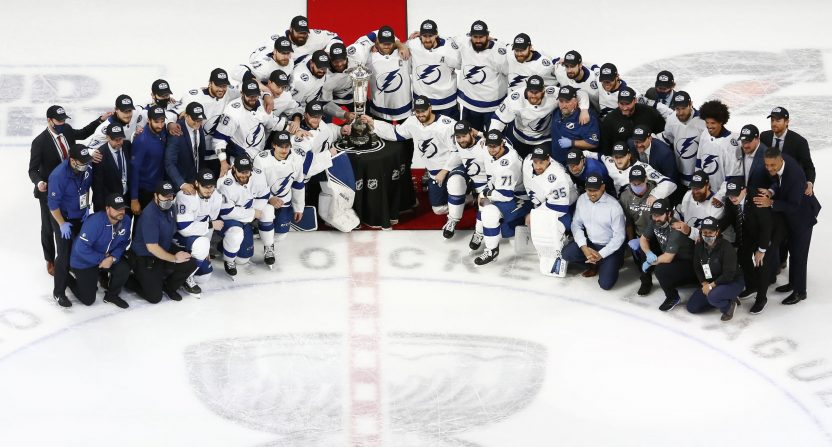 The NHL will soon anoint its 2020 Stanley Cup champion. The Final between the Dallas Stars and Tampa Bay Lightning will wrap up with the hoisting of the best trophy in sports, following a tournament that has been anything but normal. From bubble environments, a unique format, empty stands and, oh yeah, a pandemic, the 2020 champ deserves to stand among the league’s best.

You might remember the NHL’s plan to resume hockey was met with plenty of criticism. Fans weren’t happy teams who struggled during the regular season were given a chance to make the playoffs. Looking at you, Chicago Blackhawks. Fans weren’t happy seeding would be based on round-robin games. Fans weren’t happy just because the eventual winner would claim the Cup under different circumstances.

Fans didn’t know what the teams who made it this far would have to endure. They couldn’t appreciate at the time – and maybe still can’t appreciate – the sacrifices made by these two teams.

The Stars and Lightning have spent months away from home. Each team played an exhibition at the end of July before skating in three round-robin games in early August. The Stanley Cup Final is set to begin on September 19 and will wrap up in the last stretch of September. That’s a long time to be away from normal routines and loved ones. Some players have been fortunate enough to have family join them recently in the bubble, but for the most part it has been a relatively isolated experience.

Mentally, the NHL’s 2020 postseason has been just as grueling as any other playoff tournament in league history. Maybe more so. In addition to the mental toughness needed just to compete, players had to worry about families back home and the enduring virus.

#NHLBruins goalie Tuukka Rask has opted out of the NHL's Return to Play: pic.twitter.com/r3c7wjaTwR

Rask’s decision was one we imagine many players considered. We don’t envy anyone who had to go spend extensive time in the NHL’s bubble during these strange times, let alone anyone who was held to high standards out on the ice.

Physically, the Stars and Lightning have been able to maintain a high quality of play despite incredible odds. Remember that NHL players were asked to pick up where they left off with a minimal ramp-up period. They were asked to go from zero-to-sixty after months at home, many unable to maintain their usual workout routines. Then, once they hit the ice, they had to do so at playoff intensity. There wasn’t time to ease back into things or work through the rust. Early missteps resulted in early exists.

Some players may have been trying to compete after dealing with COVID-19 themselves.

Blues GM Doug Armstrong thinks COVID-19 impacted his team. “Coming into Phase 3, there was a lot going on with our organization. Of our regular players, I think like 20% of those guys had COVID at some point.”

Said COVID concerns about family weighed on Blues before bubble.

The Stars and the Lightning are just as deserving of winning the Stanley Cup as any team in NHL history. Fans asking about asterisks or some sort of note designating the oddity of 2020 need to realize what it has taken to reach this point. These two teams have gone through far more than any team that won during a lockout-shortened season. They’ve probably endured more physically and mentally than any champion to date.

Don’t confuse words such as “unique” or “strange” with words like “fluke” or “unworthy.” Don’t let the empty stands and what will surely be a weird celebration dim the glow of the accomplishment. Don’t let the circus that is 2020 take away from a very deserving champion.