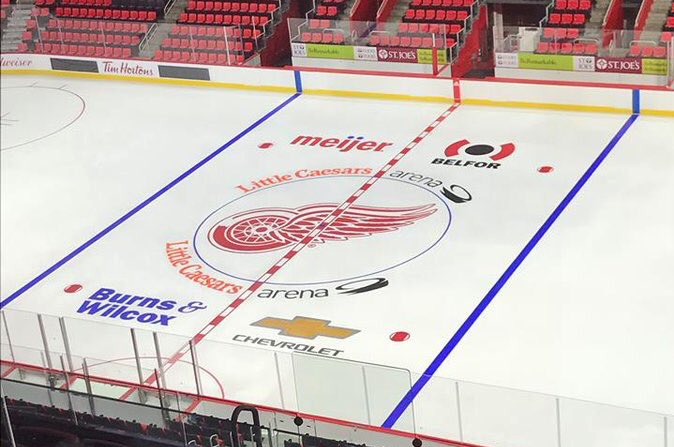 Once upon a time, the Detroit Red Wings were the undisputed center of hockey thanks to back-to-back Stanley Cup wins in the late ’90s. Around that time, the Hockeytown moniker was born, labeling Detroit as the home of all things hockey. That label stuck long after the Red Wings lost some of their competitive edge and after other teams made similar claims, such as the Minnesota Wild being the State of Hockey.

Now, the Red Wings are moving away from their iconic Hockeytown label.

As seen on Twitter, the ice at Little Caesars Arena has a clean Red Wings logo rather than the usual one that had Hockeytown written across it.

I know tradition is tradition but this looks cleaner and no one can say otherwise imo. pic.twitter.com/efouOE1i5G

You can see below a comparison of the new logo versus the old logo.

Photo from inside Little Caesars Arena from a tipster, no HOCKEYTOWN across the Red Wings logo at center ice.

Other photo is from the home opener season with the HOCKEYTOWN script. #RedWings pic.twitter.com/jsHR8Ek4nT

The center ice logo does look a lot cleaner without the Hockeytown writing. That’s a point the team highlighted in a recent statement, as seen in the Detroit Free Press.

“The ice surface has been installed at Little Caesars Arena in preparation for the 2018-19 Detroit Red Wings season. At center ice, we will debut a fresh, new look: the Winged Wheel, one of the most iconic logos in professional sports, will be prominently featured.”

Despite the logo change, the team will still honor the Hockeytown tradition in other ways.

“Also, in the coming days, several new initiatives that celebrate the fans and passion of Hockeytown are scheduled to be announced.”

There’s no telling what those initiatives may be, but it’s clear the Red Wings aren’t moving away from their old slogan completely.

After roughly 20 years, it may be time to try something new. Hockeytown may be tradition in Detroit, but the organization struggling to ice a competitive team takes away from that. Can you really be Hockeytown when other organizations are rattling off bunches of Stanley Cup wins? Or is tradition so important that you stick with it even when times are tough?