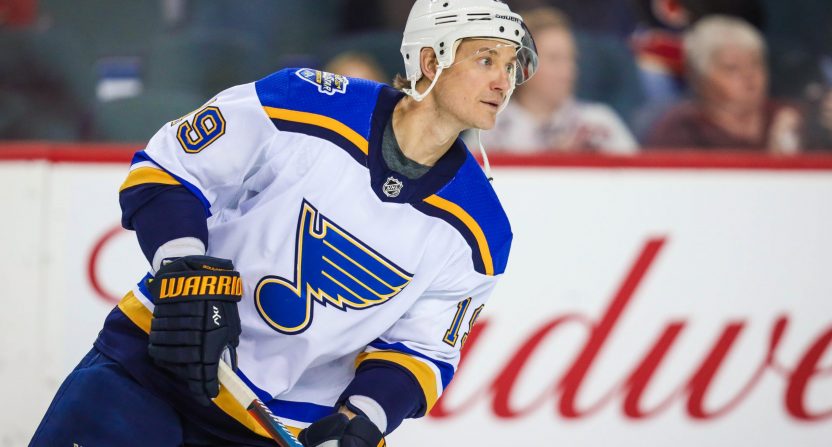 The St. Louis Blues and the hockey world as a whole witnessed a horrifying moment this week when Jay Bouwmeester collapsed suddenly on the bench. Thankfully, Bouwmeester was resuscitated and underwent an Implantable Cardioverter Defibrillator (ICD) procedure to restore his heart’s rhythm.

As truly awful as the scene and story has been, the hockey community coming together to support Bouwmeester is a great reminder of just how special hockey can be. Teams and players around the league flooded social media with tributes wishing Bouwmeester and the Blues well, dismissing fierce rivalries to recognize that real life trumps the competition on the ice.

The Anaheim Ducks were directly involved in the frightening incident, agreeing to postpone their game with the Blues after Bouwmeester collapsed. The Ducks immediately consoled Blues skaters following the incident.

Here’s a picture tonight from the @AP after Jay Bouwmeester was taken to an ambulance after collapsing on the bench. A Ducks player coming over to comfort the #STLBlues pic.twitter.com/raTPmLDD96

A few days later, the team posted a great tribute on Twitter.

The Arizona Coyotes had a similar tribute.

The Calgary Flames and Ducks took a moment before their game to wish Bouwmeester well.

Both teams on ice to say ‘Get Well Soon Jay’ pic.twitter.com/GK1qWpWKvC

The Vegas Golden Knights had a great idea by having fans sign a Get Well Soon banner for Bouwmeester when the team hosted the Blues on Thursday.

Fans: join us in sending @StLouisBlues defenseman Jay Bouwmeester our best wishes by writing him a message outside sections 11 & 12 💙💛 pic.twitter.com/gI6himVW5K

Meanwhile, just about every NHL team sent their well wishes and thoughts through social media. A Reddit user compiled just some of the many comments that rushed in following the incident. 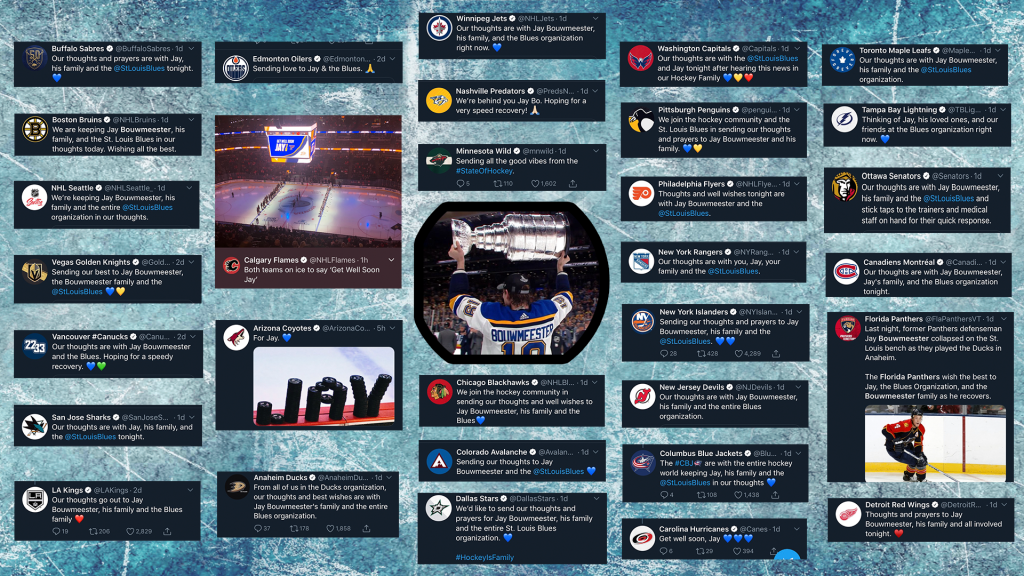 Bouwmeester’s career stretches all the way back to the 2002-03 season. He has appeared in 1,240 games for three different teams – Florida, Calgary, and St. Louis. At one point he had the longest Iron Man streak in professional sports by playing in 737 consecutive games. He’s also a member of the elite Triple Gold Club, a group of players who have won an Olympic gold medal, a World Championship gold medal and a Stanley Cup.

There’s no question that Bouwmeester’s hockey career is one of the best for a defenseman the NHL has ever seen. Despite all the accolades, it’s Bouwmeester’s demeanor and personality that make this tragic incident so heartbreaking. He’s humble and an incredibly soft spoken individual, seemingly content to blend into the background while reliably getting his job done. Outside of hockey it’d be easy to confuse Bouwmeester for a school science teacher rather than one of the game’s elite.

Bouwmeester received some flack over the last few years as he appeared to be slowing down as the miles and games piled up, but he was able to work through that criticism and form a tenacious duo with Colton Parayko as the Blues fought to their first Stanley Cup. In 2019-20, he continued to perform well, making his sudden collapse that more shocking.

At the end of the day, we’re all one big hockey family 💙💛 pic.twitter.com/u16rzrQMPu

The hockey community is one that’s incredibly special and is sometimes only recognized and appreciated in the face of adversity. Due to hockey’s status behind the other major sports, hockey fans often come together over their shared love of a sport that can be overlooked by the mainstream media and fans of the larger sports. It often feels like an “us against all of them” mentality and a “we’re all in this together” attitude.

The love of hockey can subdue even the fiercest of arguments between fans who recognize that the sport itself is awesome above all else. The small community (relatively speaking) can avoid the many pitfalls that can be seen when things get a bit too mainstream. Being in the hockey family usually makes watching your team on the road an amazing experience (one that ends in handshakes with opposing fans) rather than a potentially violent one as seen all too often in other sports.

Bouwmeester’s medical emergency reminds us all that real life is bigger than any player, team or sport. Life is short and can be incredibly fragile even for a professional athlete who by all accounts is in better shape than the vast majority of the population. The sport is an awesome entity that has brought people from all over the world together over a sheet of ice and a piece of vulcanized rubber.

It has been amazing to watch hockey fans, players and teams coming together to support one of their own.