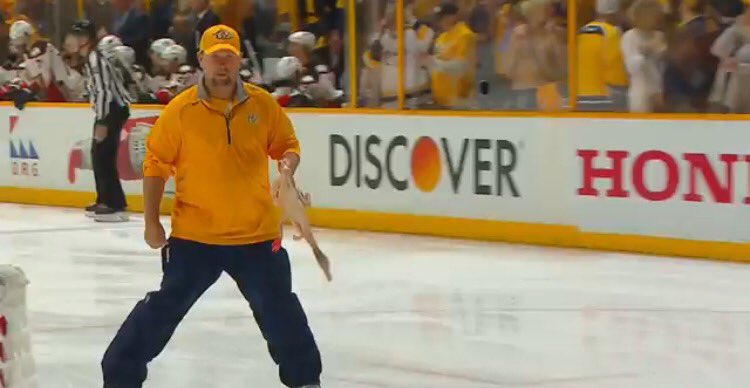 Throwing items on the ice during a playoff hockey game is a bit of a tradition. Detroit has its octopus. The Florida Panthers had their rats. The Nashville Predators tried getting their fans to buy into throwing a catfish on the ice, but two fans decided to go a different route that really makes you scratch your head. Instead of a catfish, they brought a dead duck.

Predators fans Doug Harris III and his uncle Don Harris brought a skinned duck corpse to the hockey arena for Game 3 of the Western Conference Finals, an obvious nod to Nashville’s opponent, the Anaheim Ducks. Don was the one who took on the responsibility of tossing the skinned duck to the ice. It was a hit with the fans, who offered high fives and compliments for going the extra mile with the dead duck.

#Preds fan tosses a skinned duck on the ice during stoppage: #NHLPLAYOFFS pic.twitter.com/of2jyH4cKP

The duck reportedly had the Predators logo stamped on it before it flew lifelessly to the ice surface. The bill and feet of the duck was also painted in Anaheim Ducks colors to really drive the message home. The duck was smuggled into the stadium underneath a Predators hockey jersey, slipping past security.

Now, you have to wonder about someone who decides to bring a dead duck to a hockey game. It should be noted the duck was purchased at the market, so it’s not as though these guys went hunting for ducks, skinned one and brought the raw corpse with them to the arena.

“I had someone ask if I killed the duck,” Don Harris said to The Tennessean. “I told him, ‘He died for the enjoyment of 20,000 hockey fans.'”

While the nephew and uncle got a kick out of it, Don’s wife may not have been as thrilled by the idea.

“My wife looked at me and said, ‘I’m not bailing you out,'” Harris said.

Was the duck a good luck charm? Nashville won Game 3, but there were no reported sightings of dead ducks on the ice in Game 4. Despite a furious rally in the third period, Nashville came up on the losing end of an overtime thriller. Harris says he would do it again if he gets the chance, and he’d love to try doing it in Anaheim.

“And if I can get into Anaheim, I’ll do it,” Harris claimed. “But first I am going to ask a cop to please take me away after I throw it before somebody kills me.”

Whatever works, I guess.