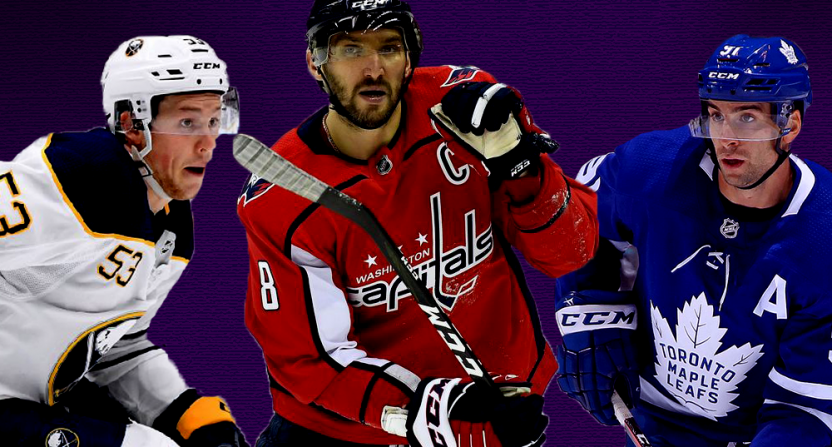 The NHL is experiencing a boost in scoring so far during the 2018-19 season. The league’s current average of 3.07 goals per game is the highest mark since the 2005-06 season saw an average of 3.08.  As a result, a new wave of players could crack the elusive 50-goal plateau.

With the 2018-19 season roughly halfway completed, Ovechkin is once again in the 50-goal conversation. But this time, he has company. 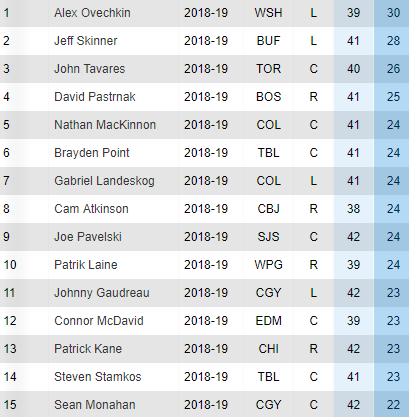 For what it’s worth, there are 22 total players who have 20 or more goals around the league’s midway point. You could make a strong case that at least five of those 22 players may make a legitimate run at 50 should good health and good fortune go their way. That’s bonkers.

Which player has the best odds of reaching 50?

Ovechkin is the clear favorite after hitting 30 goals before his team has even played 40 games. We might be better suited discussing whether or not he can hit 60 goals following his incredible first half. However, his shooting percentage of 19.5 percent is well above his career average of 12.6 and is currently a career-high by a hefty margin. Barring a major surprise, we’d expect that to cool some and bring his scoring pace down a notch. That being said, Ovie is showing no signs of slowing down and could put up a memorable 2018-19.

Jeff Skinner is also having a season to remember in his first year with the Buffalo Sabres. His 28 goals in 41 games have him well above pace to best his career high of 37 goals back in 2016-17. His tendency to score in bunches make him a strong candidate to reach 50 should current trends hold.

And so on. The top of the goal-scoring list is loaded with incredible talent and fun stories that suggest several of them could reach the summit.

Remember, only five 50-goal performances have occurred dating back to the 2011-12 season, three of which were by the same player. The last time there was more than three 50-goal scorers in a season was back in 2005-06 when there were five. Now, there could be a handful occurring all in the same season. What’s going on?

The NHL’s rise in scoring in 2018-19 has been widely discussed. Many point to the ever-shrinking goaltender equipment as the main cause and that argument holds a lot of water. Scoring is rising as equipment is shrinking, much to the chagrin of goalies who are getting a bit beat up. But there may be another factor at work.

Look to the power play.

Power plays are converting at a record pace in 2018-19 at 20.42 percent. That’s the best conversion percentage since the 1989-90 season saw a rate of 20.77 percent. The Tampa Bay Lighting are succeeding on 30.5 percent of their attempts. That’s lethal.

You may be quick to think that it’s possible officials are awarding more penalties per game resulting in more power play chances, more power play goals and increased scoring. That hasn’t been the case. Teams are averaging 3.10 power play opportunities per game, which is slightly up from the 3.04 average last season. However, it’s down compared to the 3.11 average in 2015-16, the 3.27 average in 2013-14 and so on. The 2011-12 season, the last time multiple players reached 50 goals, had an average of 3.31.

Summarized, teams are scoring more often on the power plays they are receiving and that could be due to a combination of smaller pads, better strategies, better sticks, more speed and a whole host of intangibles we can’t begin to quantify.

The NHL is going through a transformation. The league has made it clear that they want more offense in order to grow the sport. We still stand by the fact there’s a lot of entertainment found in a 1-0 result, but the NHL is intent on scores with crooked numbers. Whatever they have tried is clearly working as evidenced by the rise in goal scorers approaching previously elusive milestones. We can only hope the league doesn’t keep pressing and go too far with their efforts.

Will these trends continue? Will a batch of players reach a territory that hasn’t been seen in the NHL for years? Will an even larger group emerge to challenge 50 goals next season?

We’ll have to watch and find out.