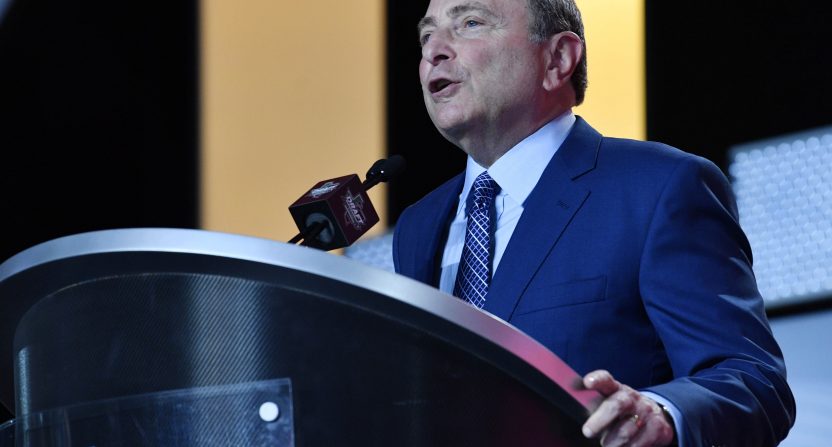 The NHL is making a strong push to expand into new international markets. With the Boston Bruins and Calgary Flames participating in two preseason games in China this season, the NHL has larger plans and wants to bring some regular season hockey to China.

Gary Bettman said he envisions the NHL eventually playing regular season games in China, that that would be the next step. They are in discussions about coming back next year to play preseason games. There are a number of teams interested in coming, he said.

The NHL hasn’t hid the fact they want to build their brand in China. Given the growth of the NBA abroad, the NHL believes it can follow a similar path to expand the sport’s awareness in new markets. In August, Wayne Gretzky was named the ambassador for Beijing’s Kunlun Red Star, aiming to grow youth hockey in China ahead of the 2022 Winter Olympics. That, combined with their preseason games, are a great start, but they’ll need to do more to establish any kind of base in China.

Speaking of the 2022 Winter Olympics, hockey fans have wondered if the NHL will participate after they declined to send players to the upcoming 2018 tournament in PyeongChang. That’s yet to be determined. However, a safe bet would suggest the NHL would try to participate given their latest push into China. What better way to grow the game in front of new fans than by sending the best of the best to compete?

That being said, TIME.com reported that the International Olympic Committee stated that the NHL’s participation in 2022 would be contingent on them participating in 2018.