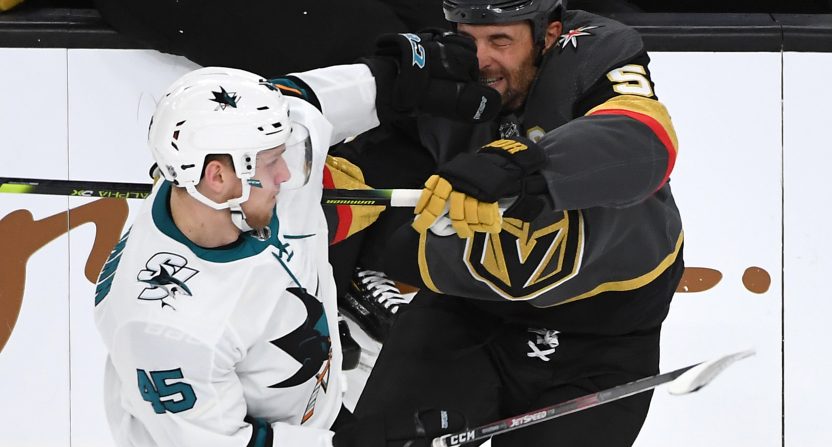 It’s time for hockey fans to recognize one of the best rivalries the NHL has seen in recent memory. The San Jose Sharks and Vegas Golden Knights had a pretty good rivalry going before their unforgettable playoff match last season, but that hatred has grown following that series into something even casual hockey fans need to start following.

The controversial call in last season’s Sharks-Golden Knights series has been well documented. It was always assumed things would be heated when the two teams crossed paths in the future. That has certainly been the case as the two sides have met four times in the past couple weeks.

Even in the preseason, the Sharks and Golden Knights wasted little time trying to destroy one another.

Switching over to the regular season, scrums have continued to be a regular occurrence. Both sides have tried to pummel the other at every possible opportunity. That’s a somewhat rare sight in the modern NHL, where fighting has usually taken a backseat to skill and finesse. But four games in about two weeks has cranked up the heat on a rivalry that was already boiling over.

It’s not often you see a line brawl in the NHL these days.

But this rivalry is more than just punches and haymakers. It’s distinctly personal despite the fact the Golden Knights are only in their third year of existence.

Perhaps Vegas goaltender Marc-Andre Fleury summed up the feud the best when he gave away a Sharks player’s stick to some fans.

That level of troll perfectly captures a rivalry that has ascended to a level that’s currently unmatched in the NHL. It’s well beyond the usual anger based on geography or games from decades ago.

I asked Marc-Andre Fleury about giving the stick to a fan during the fights and he laughed.

So, how did we get to this point?

The craziness hockey fans have witnessed already this season is the result of a perfect storm that has been building over the last couple years. As any expansion team, the Golden Knights needed another team to feud with. That could have been any of the California franchises, but it started settling on the Sharks after the two clubs had a spirited second-round playoff series in 2017-18. Los Angeles was removed from the conversation by completely rolling over in a 4-0 sweep by the Golden Knights in the opening round of the playoffs that year.

Then there’s the infamous playoff series from last season that saw the Sharks edge past the Golden Knights in seven games thanks to a controversial call that led to the NHL literally rewriting the rule book and apologizing to the Golden Knights. The rest is history.

Now, the Sharks and Golden Knights are must-see TV for all hockey fans. Their games feel like a blast from the past where scrums, fights and line brawls were common. They provide playoff intensity every time they square up, even if it’s during an exhibition. Hockey fans should sit back and enjoy what has become one of the best rivalries in recent memory.