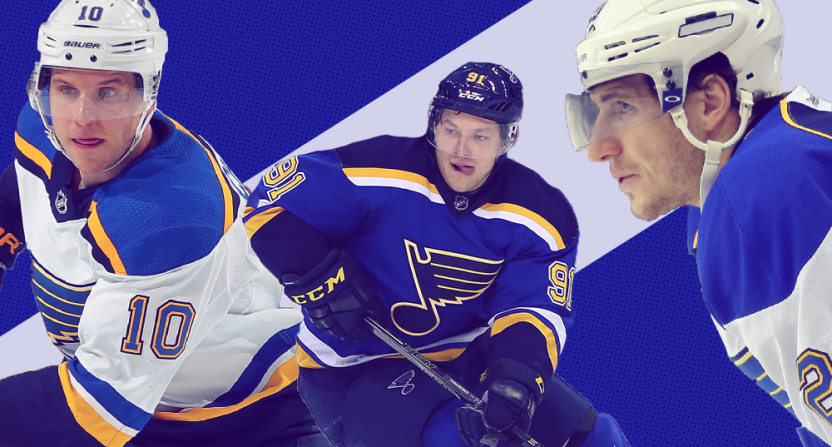 Things are getting ugly for the St. Louis Blues. After a 6-1 loss at home to the Vancouver Canucks, the Blues sunk to 10-14-4 on the year, which is good for 29th in the NHL. This comes after a summer in which the team made some significant changes and raised expectations by bringing in Ryan O’Reilly, Tyler Bozak, and David Perron. They also had some exciting rookies developing, including Robert Thomas and Jordan Kyrou. Hopes were high.

But things haven’t gone according to plan. The Blues have been absolutely dreadful. Their poor play led to head coach Mike Yeo being dismissed in November. New head coach Craig Berube hasn’t been able to find any answers either, leading many to believe the Blues have a problem at their core.

Read the quotes below and see if you think this team is strong mentally.

Steen was asked how Blues get more committed: “We’ve got to work at it everyday. Everyday is a new opportunity and we’re not taking those opportunities right now”

Schenn was asked about that comment: "That's a question for him, I don't know. Maybe he can have the answer to that"

Alexander Steen provided yet another cliche response while Brayden Schenn opted to call him out on it. Steen’s answer is similar to the one given to reporters after every Blues loss this season. It represents the root of the problem – the Blues don’t look like they’re trying out on the ice.

Tempers flaring a bit at practice as Bortuzzo and Sanford get into a scuffle. Punches were thrown. #stlblues

And video of the incident:

Here’s the Robert Bortuzzo and Zach Sanford fight from practice today at the Mills. This is video of the video shot by @sharpie2626 of @FOX2now. #STLBlues #NHL pic.twitter.com/VKZu3TgqHD

For some players, such as Vladimir Tarasenko, the team’s play this season has been embarrassing and emotional.

That’s tough to watch. Tarasenko is one of the most genuine players in hockey and deserves to be surrounded by a better team. That’s what Blues fans thought they had coming into 2018-19 but instead they’ve been given another lackadaisical, uninspired roster.

Critics have been quick to point at goaltender Jake Allen as the sole issue, but that idea doesn’t pass the stats test. The team’s offense ranks 27th and their defense ranks 21st. While Allen hasn’t been great (3.12 GAA and a .900 save percentage), you can’t pin all the blame on him when the Blues are getting torched in front of him.

So, how do the Blues right the ship? A major trade involving the team’s core might be the only solution the team hasn’t tried. Rumors have swirled connecting the Blues and the Toronto Maple Leafs in a blockbuster trade, but nothing firm has materialized. Captain Alex Pietrangelo and Colton Parayko have been linked to a few different rumors, which would certainly indicate the Blues may be ready to shake things up.

Armstrong has already fired one coach. He’s not going to throw Craig Berube under the bus, so it’s going to be one of the core guys that gets moved out. So you’re either talking about a stud-like forward, or you’re talking about one of the big boys on the back end.
–@DarrenDreger

But would a trade of Pietrangelo or Parayko be enough to shift the Blues in the right direction? The Blues have tried the old “move one significant player and call the situation fixed” approach in the past and it hasn’t worked out too well. The same problems emerge and the team sinks back into the same rut. This situation looks like one that can only be solved with sweeping changes.

Is a total rebuild in order? It seems crazy that this is even an option considering the Blues made it to the Conference Finals in 2015-16 and were expected to be sneaky contenders this year. For what it’s worth, the Blues do have a first-round pick in 2019 as they can elect to hold on to their first pick they dealt to Buffalo in the Ryan O’Reilly trade if it proves to be a top-10 selection. That pick, which is currently looking like a high one, would go well when combined with Thomas and Kyrou in a theoretical rebuild.

Stay tuned. The Blues are going to make some changes this season. Those changes could (and maybe should) be significant depending on the team’s resolve.

2 thoughts on “The St. Louis Blues are imploding and a major trade may be coming”