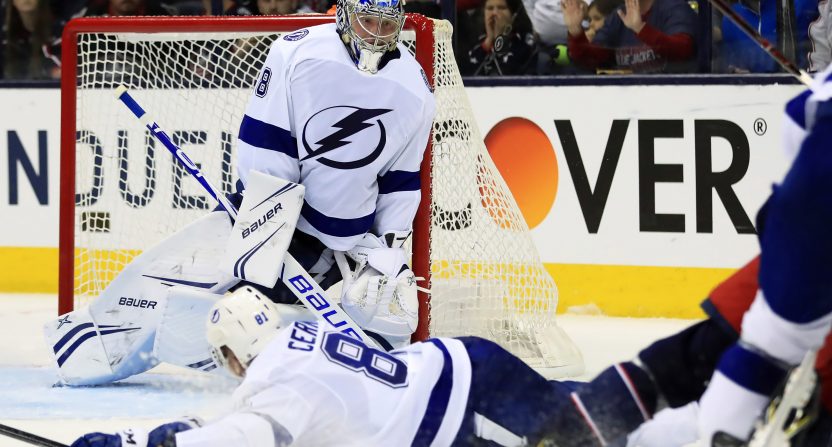 The Tampa Bay Lightning did almost everything right in the 2018-19 regular season. With a 62-16-4 record, the Lightning ended their year tied for the most regular season wins in NHL history. They entered the playoffs as the clear favorite and left many analysts wondering whether or not any team could even begin to challenge their roster.

Naturally, the Lightning are trailing their first-round playoff series to the Columbus Blue Jackets by a 3-0 margin. They’re one loss away from being dumped out of the playoffs just as they’re getting started.

The Lightning are on the brink of making NHL history for all of the wrong reasons.

A Presidents’ Trophy winner has never before been swept in the first round.

Just about everything has gone wrong for the Lightning. Nikita Kucherov picked up a deserved one-game suspension. Victor Hedman is injured. Steven Stamkos has yet to register a point. Andrei Vasilevskiy has an ugly 3.73 GAA and a .866 save percentage. And so on and so on. The team’s top performers have all gone silent. Their ability to overwhelm and dictate games has suddenly stopped.

Let’s not forget that they even coughed up a three-goal lead in Game 1 that resulted in one of our staff members regretfully promising an ass tattoo.

It’s easy to just focus on the Lightning in this story while the Blue Jackets have been masterful in disrupting everything thrown their way. But, that’s what happens when you have a team that was so good during the regular season that they may deserve a seed higher than number one facing off against the bottom seed in the Eastern Conference.

This David vs. Goliath tale seemed so incredibly lopsided before the series started. The Lightning might have been the best regular season team the NHL has ever seen. They were a whole level above the Presidents’ Trophy, scoring at will with the best offense and the best power play. The Blue Jackets were more average, carrying the league’s 12th-best offense and the 11th-best defense. Their power play was borderline terrible, ranking 28th, while their penalty kill was much more respectable at 2nd.

The Tampa Bay Lightning didn't lose three games in a row all season, until tonight.

The Lightning have fallen apart at the absolute worst possible time. The playoffs are all about getting hot at the right time and the Lightning may have finally cooled off at the most inopportune time. They may have also ran into a Blue Jackets team that has been able to capitalize on all of their shortcomings.

Sinking into an 0-3 hole has everyone discussing the curse of the Presidents’ Trophy. The idea is that a team that wins the Presidents’ Trophy, an award given to the team with the best regular season record, will be cursed during their playoff run. The whole theory is garbage and unsupported statistically, but it’s fun to assign blame when the wheels come off the best teams.

It's not really a curse, but winning the Presidents' Trophy is no guarantee of playoff success. On the Lightning's burden and learning from past teams' failures: https://t.co/g1lJ27Ym6k pic.twitter.com/iV5etHdA6B

The Lightning may just be the loudest example that succeeding in the playoffs is no easy task. That’s especially true in the NHL as the grueling postseason can wear down even the most loaded regular season juggernauts. Facing a hot team or failing to get the right bounces can spell disaster in an instant. Teams have a 1-in-31 shot of hoisting the Cup, assuming they can navigate the 82-game regular season and then string together 16 total playoff victories. It’s really, really difficult to win the Stanley Cup.

Though none of that may excuse just how bad the Lightning have been in the playoffs so far. It’s as if someone flipped a switch and turned the entire roster off just before Game 1.

Of course, it’s not over quite yet. It’s silly to count out a team before they’re mathematically eliminated. Didn’t we learn that from the St. Louis Blues earlier this season? The Lightning are facing enormous odds, but if any team can crawl out of a 3-0 hole it’s the team that was one of the best in NHL history.