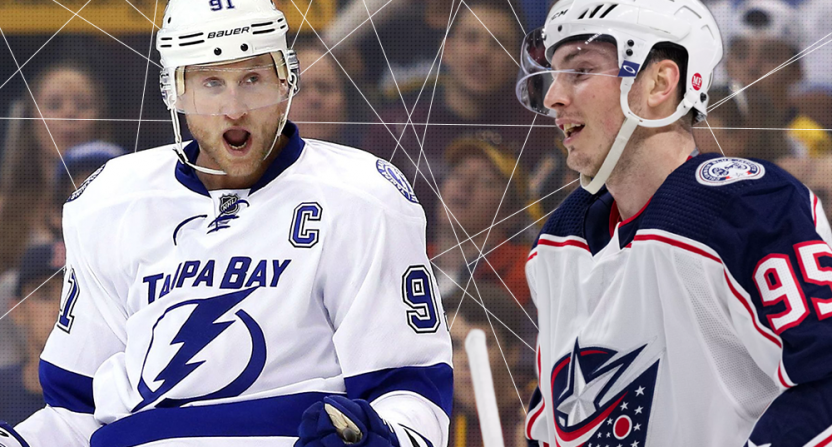 It happened. The Tampa Bay Lightning fell to the Columbus Blue Jackets in Game 4 and have been swept out of the opening round of the NHL playoffs.

Most of the hockey world is still processing what was one of the biggest surprises and upsets in league history. The Lightning, the team that was unstoppable in the regular season and matched the NHL record for most wins, failed to win a single playoff game. No Presidents’ Trophy winner had ever been swept in the first round. Until now.

The Lightning didn’t lose three games in a row all season long. Here, they dropped four straight and gave the Blue Jackets their first playoff series win in franchise history.

The @BlueJacketsNHL’s series victory over Tampa Bay was selected by only 3.5% of entrants in the 2019 #StanleyCup Playoffs Bracket Challenge presented by Jägermeister – with only 0.24% choosing a CBJ sweep. #NHLStats pic.twitter.com/afQxvaCmul

That 3.5% must be feeling pretty good right about now.

It’s difficult to comprehend just how big of an upset / choke this was. You could make a strong case that the historically-awesome Lightning dropping four straight to start the playoffs is one of the greatest collapses in sports history. We’re talking one for the ages. We even outlined how this could be a historical collapse and yet we’re still having a hard time wrapping our head around it.

For the Lightning, there’s not much you can say.

We don’t have any words and we know you don’t want to hear them.

We understand your anger, your frustration, your sadness. Everything you’re feeling – we get it.

This isn’t the ending we imagined, and certainly not the one we wanted. Thank you for being there the entire way.

The Blue Jackets did a masterful job of shutting down the league’s best offense. They stifled and frustrated Nikita Kucherov, Steven Stamkos, and the cast of players who made scoring look easy this season.

Kucherov ended the regular season with 41 goals and 128 points. He ended the playoffs with two assists and one stupid check that earned him a one-game suspension. Stamkos had 45 regular season goals and finished with one goal and an ugly (-8) plus/minus. The disappointments go on and on around the roster.

The Blue Jackets outscored the Lightning by a 17-8 margin. They thoroughly squashed the Lightning by disrupting their entire game plan with a nasty forecheck. The Blue Jackets limited Tampa Bay’s opportunities on the power play while capitalizing on five of the 10 opportunities they were presented. The whole series can serve as an example of how a less-skilled team (if we’re being honest) can overthrow a better team by doing a lot of the little things right.

The Lightning weren’t pushed against the wall too often in the regular season (if they were at all), and it showed as they failed to find an answer against the Blue Jackets. When the going got tough, the Lightning folded into a shell of timid hockey.

The Lightning had to patch up their defense with Victor Hedman missing time, but that shouldn’t excuse just how sloppy and unorganized the team looked in their own zone. And in the neutral zone. And on offense.

Steven Stamkos: “If you don’t accomplish the goal of winning it all, it’s a failure." #TBLightning

This is a collapse of epic proportions. While Stamkos and the Lightning players reflect on what went wrong, the team’s fans will think about what could have been. Stamkos is right that every team that doesn’t win it all, meaning the Stanley Cup, is ultimately viewed as a failure. However, that doesn’t hide that this outcome was unthinkable just a couple weeks ago. It won’t make the Presidents’ Trophy banner that goes up in the rafters any less embarrassing when you remember what’s connected to it.

“It’s funny: We’re expected to go far this year, and we go nowhere. In 2015, no one expected us to go anywhere, and we went far, with the same core of players. It’s hard to win in this league.”

Where do the Lightning go from here?

The good news is that the bulk of their most talented players are under contract in 2019-20. The defensive unit will likely see the most significant changes, as currently only Hedman and Ryan McDonagh are inked for 2019-20. They should have enough wiggle room under the salary cap to tinker with their roster, hoping to find an answer to whatever caused their downfall. Unfortunately, adding a new player from free agency won’t solve the needed mental adjustment that produced this outcome.

Ultimately, the Lightning collapsing will be one of the worst memories for one franchise and one of the best memories for another. The series produced joy, tears and even the promise of an ass tattoo. This series was one of those indescribable moments in sports that will live on long after the dressing room is cleared out.