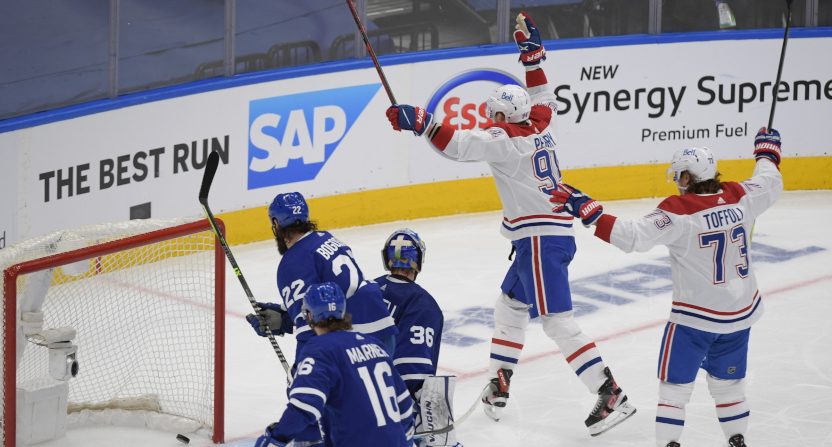 Discussion of the rarity of blowing a 3-1 lead in a seven-game playoff series has really taken off since the Golden State Warriors did that in the 2016 NBA Finals, the only time that’s ever happened at that level. Two 3-1 leads were blown last NBA playoffs, but even with that, this has only happened 13 times in the NBA. And while it’s a little more common in hockey, it’s still relatively rare there. The 30th and most recent blown 3-1 lead in the NHL playoffs came Monday night, with the Toronto Maple Leafs losing Game 7 of their first-round playoff series 3-1 on the road to the Montreal Canadiens.

The Canadiens were significant underdogs coming into this series, posting a 24-21-11 record this season (56 points) to claim the fourth and final playoff spot in the North Division. Meanwhile, the Leafs went 35-14-7 on the season (77 points) and won the division, and this looked like a series they should win. And once the series started, Montreal snuck out a 2-1 road win in Game 1, but Toronto responded with 5-1, 2-1, and 4-0 wins to go back home with a 3-1 lead. But the Canadiens then posted overtime wins in both Game 5 on the road and Game 6 at home (4-3 and 3-2, respectively), and they then closed the Leafs out with a 3-1 road win Monday night. And that marked just the latest loss in an elimination game for the Leafs:

The Maple Leafs are the first team to lose a winner-take-all game in 4 consecutive years h/t @EliasSports pic.twitter.com/b1cqUlimZ5

Which comes against a lot of the expectations:

The probability of the Toronto Maple Leafs losing the opening round in all of the past five seasons is 1.4% according to @domluszczyszyn's projections. #LeafsForever

As for Monday’s game, the scoring started at 3:02 of the second period, when Montreal’s Brendan Gallagher drove in from center ice and beat Jack Campbell with a wrist shot:

Corey Perry then added another goal for the Canadiens at 15:25 of the second period, with that deflecting in on off his leg:

Perry gives the @CanadiensMTL a 2-0 #Game7 lead with a PPG! #StanleyCup pic.twitter.com/E04Vo0nPhe

That was the fourth career goal in a Game 7 for Perry (seen celebrating above), behind only Patrice Bergeron (6) and Paul Stastny (5) among active players. And it proved decisive here. The Leafs would later pull Anderson with a fair bit of time left in the third to try and tie the game, but Tyler Toffoli scored an empty-netter to make it 3-0 Montreal at the 17:22 mark, and William Nylander’s goal in the final two minutes was too little, too late for Toronto. Carey Price made 29 saves in the win for the Canadiens.

This was the 16th Stanley Cup playoff clash between the Canadiens and the Leafs, the two oldest teams (founded in 1909 and 1917 respectively) still in the NHL. It was the first one since 1979. And it certainly had a memorable conclusion, with the Canadiens coming all the way back and pulling off the upset.