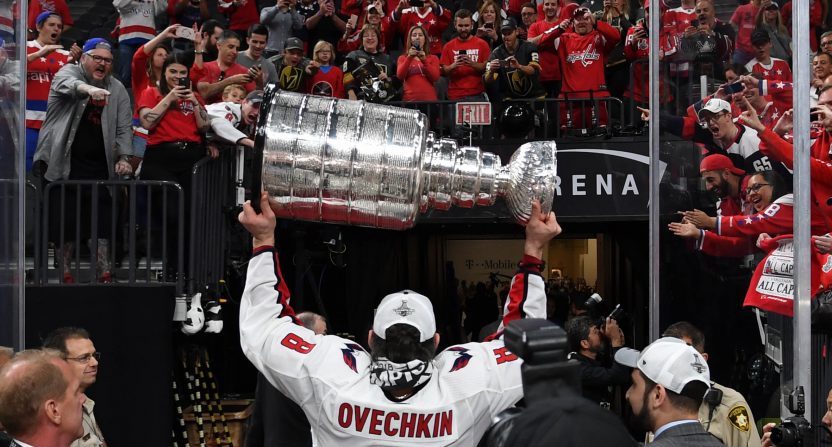 This could have gone wrong in so many ways for the Washington Capitals. Or at least that’s what we all seemed to believe.

When a team is branded a choke artist or incapable of getting it done in the playoffs, there’s no shortage of painful scenarios a fan’s mind can conjure. Blow another 3-1 lead? Sure. Lose to the Penguins again? Definitely. Finally get past the second round and lose in heart-breaking fashion? It’s about time the misery got a little more varied.

But instead of the team blowing a 3-0 lead or getting swept in the first round or watching Alex Ovechkin fall through a crack in the ice to a different dimension, everything went right. Not just that in they won the Cup, but literally everything fell perfectly.

I wrote two years ago about a scenario where the Capitals tear through the postseason, getting revenge on the teams that have tortured them and permanently flipping the narrative surrounding them. It didn’t happen that way then, but it did in a different way this year.

The team started the playoffs, seemingly 200 years ago, matched up against the Columbus Blue Jackets. They took a 2-0 lead in Game 1 on the strength of Evgeny Kuznetsov goals. But the Blue Jackets stormed back to tie the game and then win it overtime. The jokes started flying. The Capitals would choke again, they would never win. That only intensified when they lost Game 2 in overtime, and then gave up a late goal to force OT in Game 3.

And as a point of fact, the Capitals were chokers at some point. They had made the playoffs nine times in the Ovechkin era and hadn’t made the conference final. There were a litany of division titles, top seeds, 100-point seasons and even three Presidents’ Trophies.

The one-two punch of the previous two postseasons had sucked all hope out of any Washington sympathizer. Two straight Presidents’ Trophies, two straight embarrassing losses to Pittsburgh. They had blown their last chance and had to bid farewell to a solid group of contributors (Marcus Johansson, Justin Williams, Kevin Shattenkirk, Karl Alzner, Daniel Winnick). The Ovechkin era was over, and there was nothing left to do but fade away.

But Lars Eller found the back of the net in Game 3 to save the Capitals’ season. Fast forward 51 days and Eller was again coming up huge, this time to give the Caps the lead in the third period of the deciding game of the Stanley Cup Final.

Winning four straight against a team like Columbus in the first round might not have seemed like a huge deal. But the past decade of Capitals playoff hockey has been marked by squeezing sticks and clenching glutes when things started to go even a little bit wrong. The fact that this group was able to stay in the series and not fall apart at the first sign of trouble said something.

Then there was a matchup against Pittsburgh, a team they had lost to all three times in the Ovechkin era and had only beaten one time in 10 meetings overall. They took a 3-2 series lead, hardly a safe advantage historically. And then the overtime came. But Kuznetsov proved this was not just any year, scoring early in overtime and vanquishing the team’s most fearsome demon.

Still, nearly everyone expected the team to lose in the conference final. Tampa Bay was the best team in the East, and clearly better than the Caps. But Washington took a 2-0 series lead off the bat. The Lightning won three in a row, and memories of blowing two-game series leads came flooding back.

But Washington turned the tables on Tampa, as Braden Holtby had back-to-back shutouts to send his team to the final. They outscored the Lightning 7-0 over the final two games. It wasn’t a fluke, they pounded them.

Still, some expected this run to end in pain. There were two angles: the upstart Golden Knights were put together by the architect of the earlier Washington teams in George McPhee and the team was led to the finals by former Penguins goaltender Marc-Andre Fleury. The thought was one of these two would stand in the way of this team getting its first-ever Cup.

But the Capitals scored nearly as much on Fleury as the Knights’ first three opponents combined. And they made the team McPhee put together look ordinary for the first time all year.

And now, they’re champions. Ovechkin, Backstrom, Holtby and everyone else are free of all the bullshit and rumors and smack talk and bad jokes that come with being this good this long without a title.

For years, the Capitals allowed their fans to believe the worst possible outcome would happen. A first round sweep to John Tortorella. A third-straight loss to the Penguins. A blown 2-0 lead in the conference final. A Stanley Cup Final embarrassment against a former friend and foe. But this year, all that anxiety was wiped away.

As long as the Capitals fans were going to wait this long, it might as well have been this perfect.