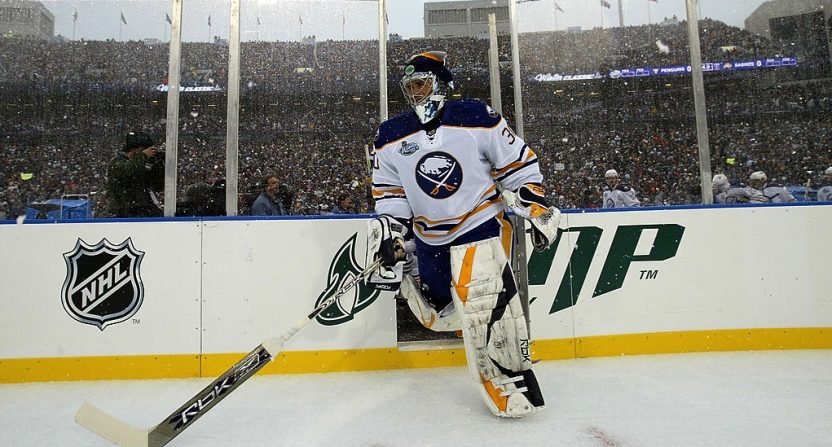 Welcome back to This Week in NHL Stupid, where we track the ugly, the silly, and the just plain stupid in the world of hockey. This week, we’re going to discuss geography.

Don’t worry, we’re not going to try to break down something complicated like when San Diego State almost joined a conference known as the Big East. Instead, we’re going to talk about the creative geography involved in having a Winter Classic in New York City for the first time.

The Buffalo Sabres of Queens

When finalized, next season’s New Year’s Day game will be the first Winter Classic in New York, after the new Yankee Stadium hosted two Stadium Series games back in 2014. Those two games featured the New York Rangers, with the Islanders and Devils each taking turns hosting a game.

The Rangers will again be featured in this game, but instead of the Islanders or Devils, or a big ticket divisional rival such as the Capitals or Penguins, this game will feature the Buffalo Sabres. And they’ll be the home team.

The New York Rangers can’t play a home game in New York in any venue other than Madison Square Garden, per contractual agreement by which they get sweetheart deals on their utility bills. So just as the Isles and Devils were the designated home teams for the Stadium Series, another team has to be the designated home team for the 2018 Winter Classic. And it isn’t going to be the Islanders or Devils, as NBC has no interest in getting local television numbers from one market instead of two.

Since it would be doubly ridiculous to have the Washington Capitals or any other team play a home game in Queens, NY, the home team is the last remaining New York state hockey team that brings in historically good television numbers from a different market, the Sabres are the only choice.

Doesn’t make it seem any less stupid. I say this as somebody who is absolutely going to find a way to be there. (I was at the Stadium Series game against the Islanders and watched a Devils fan get pelted by frozen food and it was glorious.)

But this is going to be an interesting measuring stick for where the Winter Classic is headed. Citi Field is a nice venue, if not so much iconic (seems like most of the iconic venues have been used for these already). And it will feature two New York teams because of the Madison Square Garden contract. What hockey fans hope for is that this game doesn’t become the moment where the signature regular season moment for the NHL jumps the shark.

Fishing for a Story

Hey, here’s a stupid moment that happened this week:

Yeah, poor Nikita Zaitsev. Looked ridiculous on a play which led directly to a Panthers goal as they went on to romp over Toronto, 7-2.

But that’s not the stupid part. The stupid part is that Toronto blamed the loss on a fishing trip that members of the Leafs took the day before this loss.

Maybe the leafs at this point of the season should spend less time posting fishing pictures on instagram and more on HOCKEY. #tmltalk

There has been a lot of this in sports lately. The New York Giants took a boat trip the Monday before a playoff game, and that’s why they lost. The Mets took a golf trip to the Bahamas during a road trip to Miami, and got roasted for it. Now the Maple Leafs lost to Florida because of a fishing trip.

I mean, if Florida fishing trips were responsible for all visiting teams losing, wouldn’t the Panthers have multiple banners in their barn? Blaming losses on players having relaxing days is tiresome.

Meanwhile, Tyler Bozak, who was one of the offenders on that boat, had a great response after the Leafs came back to beat the Lightning as he credited “bonding” in relaxing the team:

Bozak says fishing trip was key in helping the boys relax for that big win in tampa. #TMLtalk #Leafs pic.twitter.com/DckNEOh5ZM

Ahh, the perks of playing in Toronto.