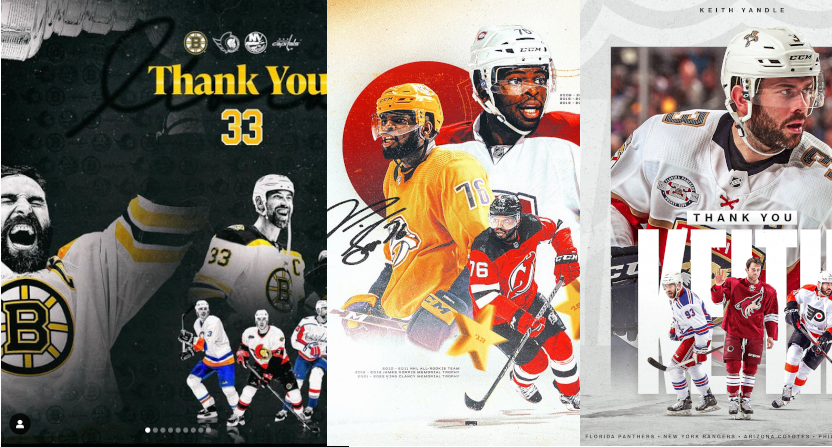 The NHL saw three remarkable defensemen retire on Tuesday. That would be Zdeno Chára (45), Keith Yandle (36), and PK Subban (33). Chára (who played with the New York Islanders last season, but signed a one-day contract to retire as a member of the Boston Bruins) and Subban (who was with the New Jersey Devils last season) are both past winners of the James Norris Memorial Trophy as the league’s top defenseman, in 2009 and 2013 respectively, while Yandle (who was with the Philadelphia Flyers last season) is the current holder of the NHL iron man record with 989 consecutive games played. Here’s how those players announced their retirements:

"I'm retiring from the game of hockey….Taking my talents to South Beach and doing nothing."

Our guy Keith Yandle joined us to officially announce his retirement from the NHL. A true legend in every aspect of the word.

Each of these players had remarkable careers. Subban (seen at center above) was drafted in the second round (43rd overall) by the Montreal Canadiens in 2007, but continued to play in junior with the Belleville Bulls of the Ontario Hockey League for two further seasons. He then played with the Canadiens’ minor-league affiliate Hamilton Bulldogs in the American Hockey League, then earned his first call-up to the NHL team in February 2010, playing two regular-season and 14 playoff games with them that season.

Subban started with the big-league team for good in the 2010-11 season, and had a particularly remarkable campaign for the Canadiens in the lockout-shortened 2012-13 season. There, he  recorded 11 goals and 27 assists in 42 games and claiming the Norris Trophy. He’d go on to play for the Nashville Predators (2016-17 through 2018-19) and the Devils. He finished his NHL career with 115 goals and 352 assists in 832 regular-season games.

Subban has also been notable for his off-ice endeavors, including raising $10 million for the Montreal Children’s Hospital, launching a P.K.’s Blue Line Buddies initiative to build better relationships between law enforcement officers (later expanded to other frontline professions as well) and inner-city youth, donating $1 million to support a Montreal mental health clinic, and matching funds to support Ukrainian cancer patients. He’s also co-chaired the league’s Player Inclusion Committee. And he received the King Clancy Memorial Trophy last season, an award given annually to “the player who best exemplifies leadership qualities on and off the ice and who has made a significant humanitarian contribution to his community.” He also joined ESPN as an analyst for the playoffs in both 2021 and this year.

Chára (seen at left above) started his career playing for teams in Slovakia (Dukla Trenčín and ŠHK 37 Piešťany) and the Czech Republic (Sparta Praha), then was selected in the third round (56th overall) by the Islanders in 1996. He’d play in the Western Hockey League with the Prince George Cougars in the 1996-97 season, then split time between the Islanders and their AHL affiliates over the next two seasons. Following full NHL seasons with the Islanders in the 1999-2000 and 2000-01 campaigns, he was traded to the Ottawa Senators, where he’d be a key blue-line figure through the 2005-06 season.

After his time in Ottawa, Chára then signed as a free agent with the Bruins. He became the first Slovak-born player to win the Norris Trophy in 2009, then the second European-born player to captain a team to the Stanley Cup in 2011. He stayed with Boston through the 2019-2020 season, then finished off his career with the Washington Capitals (2020-21) and Islanders (2021-22). Across his 24 NHL seasons, Chára played 1,680 regular-season games, recording 209 goals and 471 assists. At 6’9”, he was the tallest player ever to play in the NHL.

Chára also added 18 goals and 52 assists across 200 playoff games. And he also played for Slovakia’s Dukla Trenčín in 2001-02, Färjestad BK in the Swedish Elite League in 2004-05 (during a NHL lockout), and Lev Praha in the KHL in 2012-13 (during another NHL lockout), in addition to recording 82 international games for Slovakia and Team Europe (the latter at the World Cup of Hockey in 2016).

Yandle (seen at right above) was drafted in the fourth round (105th overall) by the then-Phoenix Coyotes in 2005 following a successful high school career at Cushing Academy in Massachusetts. He spent the 2005-06 season with the Moncton Wildcats of the Quebec Major Junior Hockey League, then went to the Coyotes’ San Antonio Rampage AHL affiliate. He earned a brief NHL callup in the 2006-07 season, then a longer stint the next year, and then was up for good beginning in 2008-09. He’d play for Phoenix longer then that name lasted, eventually being traded to the New York Rangers partway through the 2014-15 season, the Coyotes’ first year as the Arizona Coyotes.

Yandle went on to play another season with the Rangers, then played for the Florida Panthers from the 2016-17 season through the 2021-22 season. He capped off his career last year with the Flyers. The 2020-21 season saw him become the third player ever to play 900 consecutive NHL games, and he then passed Doug Jarvis (964 games) this January, finishing with the current record of 989 games. All in all, he posted 103 goals and 516 assists across 1,109 regular-season NHL games, plus six goals and 30 assists across 56 playoff games. The NHL is going to be very different this coming season without him, Subban and Chára on the blue lines.