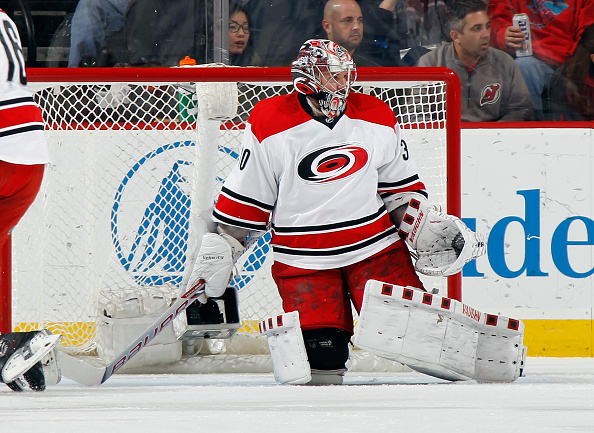 Getting good goaltending is paramount to success. Teams like the New York Rangers, Florida Panthers, and Montreal Canadiens have top-flight goaltenders which has alleviated other weaknesses they might have. Not all teams are so fortunate, as their poor goaltending has cost them spots in the standings, or worse, prevented them from contending at all. Here are three teams who really could use an upgrade between the pipes.

.@eddielack starts tonight for the #Canes in his first game against the #Canucks! #CARvsVAN #Redvolution pic.twitter.com/UYr2ZKtBzE

Carolina has played impressive hockey under second-year head coach Bill Peters. They’ve excelled at puck possession, have a +3.2 shot differential, and don’t take many nights off. The Hurricanes 16-18-7 record isn’t reflective of their play, and despite being absolutely snake-bitten in the goal department (6.32 even strength shooting percentage), Carolina goaltenders have been abysmal.

Hurricanes goalies have combined for a .911 even strength save percentage, third-worst in the NHL, despite allowing 24.1 scoring chances against per game, sixth-fewest in the league.

The ghost of Cam Ward has made 28 appearances, and unsurprisingly they’ve been mostly bad. Despite only facing 24.07 shots against per sixty minutes, he’s still struggled mightily, posting a .914 even strength save percentage – which is identical to his rate last year. He’s simply not starting calibre material, and the sooner Carolina management realizes this, the better. Yes, he helped the Hurricanes win the Stanley Cup and is a big part of the franchise history, but that was almost ten years ago. He’s a UFA at season’s end, so the pain is almost over.

I was high on the Eddie Lack acquisition when he was acquired, but he’s been somehow worse than Ward. He’s allowed at least three goals in eight of his 16 appearances and has struggled to find any consistency this season. He had a legitimate chance to take the reigns and become the starter in Carolina, but he’s completely fumbled the opportunity. Lack’s .907 even strength save percentage ranks 62nd of 71 goalies with 50 minutes played 5v5.

Despite the Hurricanes strong play, they’re going nowhere with this tandem.

In the crease. #SJSharks pic.twitter.com/44VwNuCw1o

San Jose sits second to last in the Pacific with an 18-18-2 record. Their goaltending has combined for a .910 even strength save percentage which is the second worst mark in the entire NHL.

After years of uncertainty between the pipes, the Sharks took a gamble when they traded a first-round pick to the Boston Bruins for Martin Jones. Jones had been outstanding in 34 games with the Kings, posting a .934 even strength save percentage and looked like he was an opportunity away from being a very good starting goaltender. Through 32 games with the Sharks, it’s tough to tell if he can be that.

Jones has posted a .917 even strength save percentage, and has a 2.50 GAA and a .910 save percentage in all situations. While they’re not horrific numbers, they aren’t super encouraging. The Sharks have allowed the fifth fewest shots against per sixty minutes, so it’s not like he’s facing a Craig Anderson-like work load. It’s tough to tell what Jones is at this point.

What’s really stung San Jose is backup Alex Stalock’s stale play. After a subpar 2014-15, he’s regressed further. In 10 games (four starts), he’s posted an .885 even strength save percentage, with a 2.98 GAA in all situations. The Sharks don’t seem to trust him, and it would be shocking if they weren’t considering an upgrade behind Jones. He’s not good enough to play in the NHL, and it’s as simple as that.

Jones still has time to become a good starting goalie, but Stalock is hurting the club even if he’s not out there every day.

The Flames aren’t a really good team, but if they had anything resembling good goaltending all season, they’d probably be in a playoff position right now.

Calgary takes the cake with the worst even strength save percentage in the NHL at .910 percent. The team doesn’t do it’s goaltenders any favors, allowing the 10th most shots/60 at 29.2, and have a -1.5 shot differential. Still, Karri Ramo, Jonas Hiller, and Joni Ortio haven’t exactly helped.

Ramo deserves some credit, as he’s posted a remarkable .946 even strength save percentage in his last 12 games, but that doesn’t take away the fact he was horrible in his first 17 starts, with a .907 even strength percentage, earning a demotion to the AHL. He’s been bad for the most part, but he’s not what’s sinking the club.

Former Flames starter Jonas Hiller has been the single worst goaltender in the NHL this season 5-on-5. Now, he’s been dealing with injuries this season, but in 10 games the Swiss netminder ranks dead last among 71 goalies in even strength percentage with a putrid .875 mark. On the season, he’s 4-4 with a 3.76 GAA and an .862 save percentage, which is far below replacement level. He’s been hideous. At this point, it’s of note when he’s playing average. Ortio has been Hiller levels bad, but has only appeared in four games.

Ramo should give Flames faithful hope that goaltending won’t be a total trainwreck all season, but if the team wants to take the next step, Hiller has got to go.