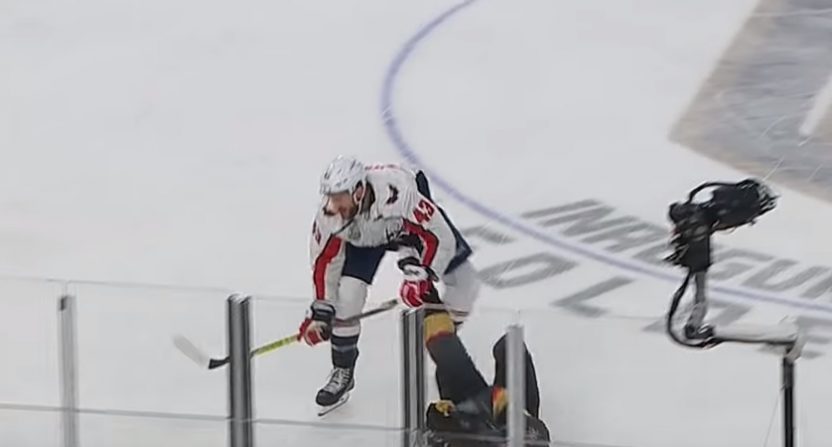 Washington Capitals forward Tom Wilson doesn’t understand why everyone is so upset about his hit on Vegas Golden Knights forward Jonathan Marchessault.

Following the NHL’s decision to not hand out any additional discipline on the hit that sent Marchessault to the dressing room for the concussion protocol, Wilson spoke with the media and said he thought it was a good hit.

Wilson also told the media that he believes he was just finishing his check and thinks Marchessault was fine because he was yelling at him from the bench. Clearly, Wilson isn’t grounded in reality and isn’t a medical doctor.

Here’s a refresher on the hit in question:

There are so many things wrong here. The puck isn’t even close to Marchessault, making this a late hit at the very least. It’s also a blindside hit from Wilson, a player with an ugly reputation, on one of Vegas’ best forwards. He could have easily altered his route or eased up on the check. Is it really surprising there’s a media circus?

Clearly, Wilson hasn’t learned his lesson despite being suspended earlier this postseason after a hit on Zach Aston-Reese of the Pittsburgh Penguins. At the same time, the NHL’s response – or lack of a response – sends the message to Wilson and everyone else that these types of plays are acceptable. Leave it to the NHL to sit on their hands during the biggest stage of the season when the most attention is on the sport.

The 5 + game misconduct for Interference was instituted for the very type of late blindside hit Tom Wilson just delivered.

Meanwhile, the NHL acted as if there was nothing they could do on the play. That may have been because none of the officials saw it, but the linesman was standing right next to where the contact occurred.

Hopefully Wilson and his antics aren’t a story throughout the remainder of the series.