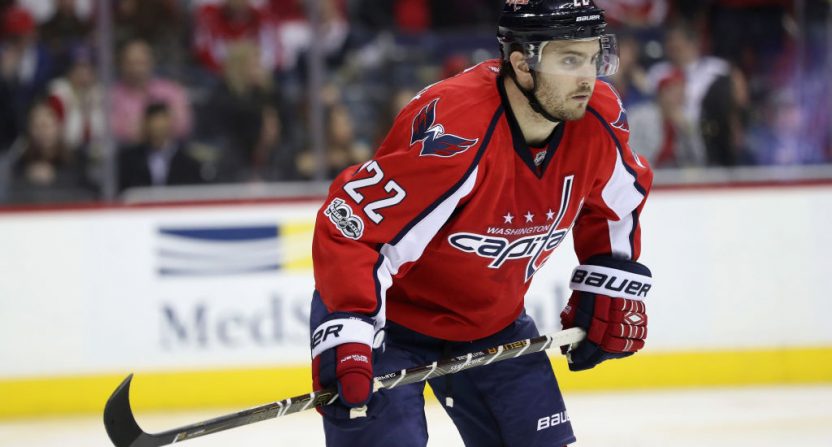 NHL free agency begins Saturday. Some may call it a “free agent frenzy,” but anything that heavily involves the final destinations of Karl Alzner and Martin Hanzal is an insult to frenzies. It’s more of an unemployed hockey player hodgepodge than a free agent frenzy.

Anyway, outside of one or two players, NHL teams should not sign anybody on the market for more than $1 million per season. At most, $2 million, but that’s pushing it. This crop is as weak as it has ever been, but that won’t stop general managers from overpaying mediocre players coming off one decent season or because they have a Stanley Cup ring.

So where will the best free agents go? Using the TSN top 10 list (it’s so bad!) and my incredible ability to predict where players will go and how much they will make (don’t look at the one I did last year), we will now have some free agent fun.

What’s his deal? He’s fine. An NHL player. But he had never reached 50 points before last season and did a lot of his damage on the power play. He’s essentially a bottom-six forward that can give you 40 points when everything goes his way, but he’s never reached 20 goals.

Where is he going? Two years, $6 million to the Blackhawks.

Really? Sure, why not, who cares.

Is he good? Basically.

What’s his deal? He’s like Gagner, only way more disappointing. He was a first-round pick in 2005 and just like Gagner, he’s a 40-point dude that will cost too much this summer. He was disappointing in the playoffs, so it’s not even like he can sell himself on that. What a horrible free-agent class.

Where is he going? Three years, $12 million to the Canucks.

Is he good? Still, enough.

What’s his deal? He’s probably more done than anyone realizes, as he shot 14.2 percent last season, his highest number since the 2009-10 season. He’s also 37 years old so the danger of an even steeper decline or injury next season is huge.

Where is he going? One year, $4 million with the Sharks

Really? Going anywhere else seems like a bad idea.

Is he good? Can’t say for sure.

What’s his deal? The nicest thing about him is he was taken with the 69th pick in the 2008 draft. The Coyotes got a third- and conditional fifth-round pick out of the Flames for him last year. He’s big and strong and outside of a 36-point season is in 2015-16 season hasn’t done much offensively in his career.

Where is he going? Five years, $22 million to the Devils.

Is he good? You bet.

What’s his deal? He’s old, only scored seven goals last season and has yet to win a Stanley Cup. He went from 82 points two years ago to 50 points last season. He should be looking for a cheap deal on a contender.

Where is he going? One year, $3 million to the Penguins.

Really? No way, but if I write it enough perhaps I can will it into existence.

Is he good? In some ways, yes.

What’s his deal? He’s a perfectly solid depth center and those generally don’t cost too much money, but he’s coming to market with two rings. As we’ve learned in the past, that comes at a premium. He’s relatively young too, so this has potential to be UFA Day’s biggest mistake.

Where is he going? Five years, $15 million to the Rangers.

Really? They need a center, he’s from Connecticut, guys like Bonino get a lot of term to bring down the cap hit, so whatever.

What’s his deal? He’s still money in the bank for 20 goals and carries a reputation as a playoff performer. At 35 years old, there’s risk he could be done at any moment, but life is full of risk and he’s the fourth-best player on the market.

Where is he going? Two years, $9 million to the Stars

Really? They’ve got cash, need a top-six winger and they finally have a goaltender, so let’s make it happen.

Is he good? Not particularly.

What’s his deal? He can be a solid defender but he’s really a second pairing guy or even a third-pairing guy if the team is deep enough. But he’s only 28 years old and many old men in suits that make a lot of money think he’s the best defender on the market, so look out. This could be get nuts.

Where is he going? Six years, $30 million to the Golden Knights

Really? You know in your heart this will happen.

Is he good? Very.

What’s his deal? While he’s a great offensive player, the worry here is he had his great season on a one-year show-me deal and maybe he gets complacent on a long-term deal. He’s only 30 years old and is by far the best forward available, so he’s going to get paid unless the anti-Russian sentiment in the league is too strong (it may be!).

Where is he going? Six years, $36 million to the Devils.

Really? Ilya Kovalchuk isn’t on this list because he’s not a free agent but the idea of the Devils using Kovalchuk and first overall pick Nico Hischier as bait to get Radulov has just enough plausibility for you to go with this until Saturday.

What’s his deal? He’s one of the best defensemen to get to the open market in a long time. He will become his new team’s top-pairing d-man that will immediately improve the power play. The only fear for teams that covet him is if he got too much of the Capitals stink on him in his two months there.

Where is he going? Seven years, $49 million to the Rangers.

Really? I’m not sure if the Rangers have the cap room for this, Bonino, and new deals for Mika Zibanejad and Jesper Fast but I don’t care. I love it. Maybe they don’t sign Bonino and only do this. This has seemed inevitable for a long time so why venture away from it?