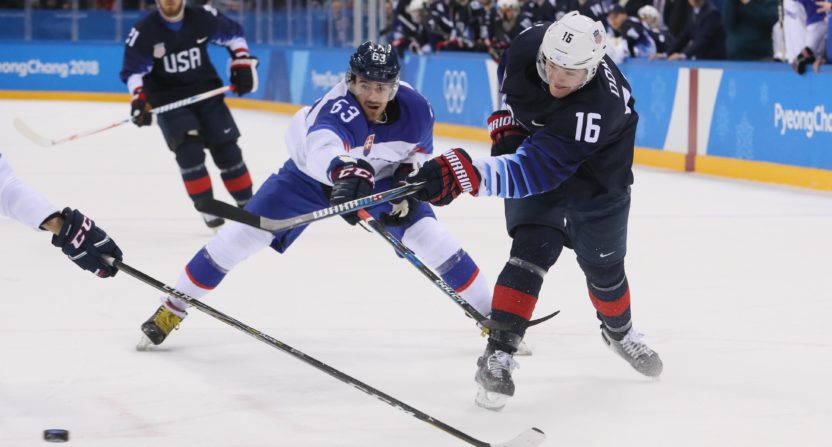 With no current NHL players available, Team USA assembled a team of rising prospects, minor leaguers and a few veterans with some past NHL experience for the 2018 Winter Olympics and hoped for the best in South Korea. The Olympic experience was a far cry from what could have been had the NHL allowed its players to travel to the Games this season, but the United States bowed out in the quarterfinals of the men’s tournament after tying 2-2 and losing in a 1-0 shootout to Czech Republic.

It was a rough Olympic tournament for the Americans. Team USA opened up by blowing a 2-0 lead against Slovenia in the round-robin opener and was completely mismatched against a team of Russians with more experienced players at their disposal, thanks to the KHL options available to them.

A second win against Slovakia in the playoff qualifier was the highlight of the tournament for the US, but the ride came to a disappointing end as the lack of depth and experience against the Czech Republic proved too much to overcome a day after topping Slovakia. Team USA did all it could to build a roster it felt could compete, but without the NHL pool of talent to rely on, the team had to grasp for whatever it could this year. Fans were left to wonder what could have been if the NHL had allowed the top American players to participate.

Returning home from the Olympics without a medal is actually not all that uncommon for Team USA, even in the NHL era, but the loss compelled many American hockey fans to direct the blame on NHL commissioner Gary Bettman. Bettman, used to not being the most popular guy in any arena he steps foot in, is the face of the NHL’s decision to not shut down its regular season for the Olympics, a decision that has been largely criticized by fans and players for the past year. A loss by the Americans, however, doesn’t figure to make Bettman and the NHL reverse their line of thinking for the 2022 Winter Olympics.

Hear from members of the U.S. Men’s Team after a shootout loss to the Czech Republic in the quarterfinals. Full recap: https://t.co/lqDTEYHx0a pic.twitter.com/ahrsWvlynq

The commissioner absolutely needed Canada to avoid a similar situation. Fortunately for Bettman, Canada held on for a 1-0 victory in their quarterfinal matchup against Finland to advance to the semifinals, putting the Canadians one win closer to returning home with a medal of some variety. As long as Canada returns with a medal, Bettman will likely survive this decision without further scrutiny.

The absolute worst-case scenario in terms of PR and fan reaction for Bettman would be to see both the United States and Canada fail to medal in the Olympics. Canada still must win one more game in order to guarantee themselves a medal in Pyeongchang. Their next opponent will be the Cinderella Germany team, which should mean a win. However, Germany just scored their own “Miracle on Ice” by topping top-seed Sweden in overtime, so nothing should be considered impossible.

Team Germany stuns Sweden in overtime and advances to the men's semifinal! pic.twitter.com/rCPZzhVzyP

Bettman, already the least popular commissioner in North America (Roger Goodell doesn’t have fans booing him everywhere he goes), has defended the league’s decision to not send its players to the Olympics for the past year, and will continue to do so regardless of what comes next for Canada.

From the perspective of the league, he does have a valid point.

When the NHL decided to allow players to participate in the Olympics during the 1998 Nagano Games, the goal was to capitalize on the exposure the league would gain by having its top players from around the world competing on the Olympic stage for the first time. While the Olympics surely benefited by having the best players hockey had to offer, the NHL never really saw the desired results. The NHL continues to lag in TV ratings and never gets a bump from the Olympics that justifies shutting down the entire league.

The NHL did see a slight bump when the Olympics were in Salt Lake City and Vancouver, easily accessible time zones for core NHL fans (and having Canada vs. USA in gold medal games helped). But when the games are played at night in South Korea, when it is morning in North America, it becomes a riskier proposition for the NHL’s overall mission. Because of that, there was no incentive for the NHL to allow players to leave for the Olympics againn, even if many international stars were outspoken about their desire to compete for a gold medal in PyeongChang this winter.

The topic of NHL players stumping for inclusion in the 2022 Olympics will be a story to continue to watch in the coming years, especially if it becomes an issue at the collective bargaining table. The current CBA expires after the 2021-22 season, but both the league and players association can opt out of the CBA in 2019.

The NHL will take some heat for its decision no matter what happens. But if Canada returns from PyeongChang with the gold, there will be less heat on Bettman than there would be Team Canada failed to medal. So if you want NHL players back in the Olympics in four years, root hard for Germany to pull off another stunner when they take on Canada. If Canada gets eliminated before having a chance to medal, then Bettman will have plenty of questions to answer all across North America.