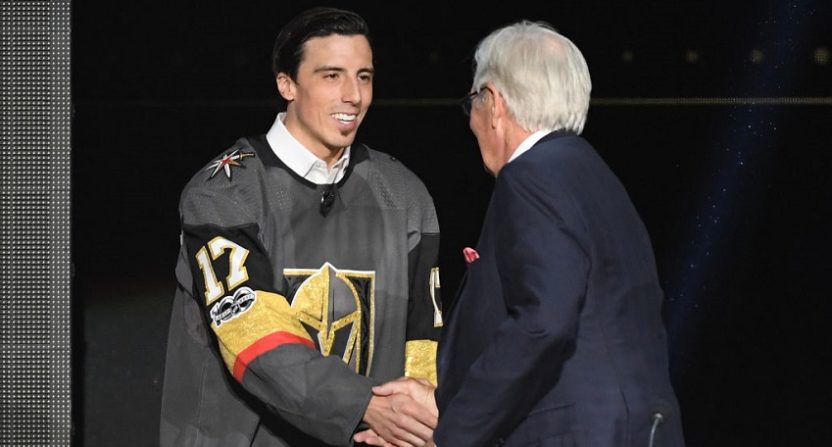 The Vegas Golden Knights officially have a roster. On Wednesday night, in between moments when a stripper/werewolf guy told corny jokes, the NHL revealed all 30 picks made by the Knights in the expansion draft.

At least, that’s what I think happened based on my Twitter timeline, the only good source for an NHL awards show.

A couple picks made by Knights general manager George McPhee were good. Most were bad. Some were so bad that it’s fair to wonder if McPhee made some crazy prop bet that the Knights would finish with fewer than 20 points next season.

Just about all the picks were uninteresting, but it’s my job to make the uninteresting seem interesting. I write about hockey. It’s what I do. So let’s take a look at all 30 picks (with the bribes/payoffs/trades included) and rank each pick from worst to best.

30. Clayton Stoner, Ducks (the Ducks also traded Shea Theodore to the Knights)
There will be much worse players on this list but no worse “pick” than what McPhee did here. He passed on Josh Manson and Sami Vatanen to take two defensemen who will almost definitely be worse than what could have been had. If there were Knights fans, they should be seething about this.

29. Deryk Engelland, Flames
He played with the Wranglers of the ECHL back in the day. One of the dumber things sports teams do is make decisions based on players’ former residences, yet Vegas found a way to do it with a team in a desert.

28. Cody Eakin, Stars
Why? You’d think you’d take a 12-point player with a nearly $4 million cap hit only if there were some sort of bonus compensation, but nope. McPhee just wanted Eakin, perhaps to flip elsewhere. Even if that’s the case, sheesh.

27. Griffin Reinhart, Oilers
When you were once a fourth overall pick, someone will always take a chance on you. There were better choices here.

26. Alexei Emelin, Canadiens
Nobody looked as toast as Emelin did last year. But when you’re a slow-footed defenseman, there’s probably nothing better for resurrecting your career than playing tough minutes on Vegas ice.

24. Tomas Nosek, Red Wings
He’s been a decent AHL player for a few years, but he’s 24 and can’t possibly carry more value than goaltender Petr Mrazek. I don’t get it.

23. William Carrier, Sabres (the Sabres also traded a sixth-round pick to keep the Knights away from other players)
They should have just taken the other players.

22. Oscar Lindberg, Rangers
It’s not about the player but the players the Knights didn’t take — Michael Grabner, Antti Raanta and Jesper Fast. There was no sweetener for taking Lindberg, so I assume McPhee just got exhausted when it came to asking for bribes by the time he got to the Rangers.

21. Connor Brickley, Hurricanes (the Hurricanes gave Vegas a fifth-round pick to stay away from others)
This guy could have been living in my apartment building for the past four years and I would not have known his name and face before Wednesday night. Why take him instead of Lee Stempniak when he’d fetch at least that at next year’s trade deadline is beyond me.

20. Chris Thorburn, Jets
This pick was sort of part of another deal that involved a first-round pick but that pick didn’t really have anything to do with this choice, so why take the Jets’ 14th-best forward for nothing?

19. Jon Merrill, Devils
Beau Bennett was the play here. Merrill may develop eventually but as someone that has seen a fair share of his games, I don’t know why you’d bet on that over Bennett having trade value next season.

18. Pierre-Edouard Bellemare, Flyers
Leave it to the GM that once traded Filip Forsberg for Martin Erat to value the grit of a fourth-line center over a couple other more skilled players.

17. Brendan Leipsic, Maple Leafs
He had 51 points in 49 games for the AHL Marlies last season. Maybe there’s something there.

16. Brayden McNabb, Kings
The pickings were slim with Los Angeles. This is fine.

15. Teemu Pulkkinen, Coyotes
He’s 25 but there’s potential. The Coyotes didn’t need him because they are loaded at forward. He could turn out to be a decent player if he gets extended playing time.

14. Trevor van Riemsdyk, Blackhawks
It was either him or Marcus Kruger. There wasn’t much Chicago was offering.

13. Colin Miller, Bruins
This was one of the few no-brainers that McPhee didn’t screw up. He could be part of the Knights’ top four defensemen next season.

12. Marc Methot, Senators
Assuming the Knights flip him for another draft pick, it’s a nice move.

11. Calvin Pickard, Avalanche
He should be a solid No. 2 in net for the Knights. After playing 50 games with the Avs last season, he’s probably the only player that can say going to Vegas could be a step up.

10. Erik Haula, Wild (the Wild also sent prospect Alex Tuch to the Knights for a conditional pick)
The winger should be a very nice player for the Knights. But why take a very nice player who should provide solid third-line minutes when you could have taken Eric Staal or Jonas Brodin, who could have commanded a first-round pick in a flip trade? That’s not Haula’s fault but McPhee’s decisions about who he did nor did not fleece for picks is confusing.

9. David Schlemko, Sharks
He’s one of the most underrated defensemen in the league. It sucks for him that he goes from a great situation to an expansion team but his game may be the least affected of anyone Vegas selected.

8. Nate Schmidt, Capitals
There’s a case to be made that the Knights should have taken goaltender Philipp Grubauer but this was the wiser move.

7. David Perron, Blues
This is the right play because Perron should get big minutes, rack up a bunch of points and fetch at least a third-round pick as a rental at next year’s trade deadline.

6. Jason Garrison, Lightning (this included Nikita Gusev, a 2017 second-round pick and a 2018 fourth-round pick)
Garrison was probably the guy the Knights were taking anyway, so to get a whole bunch of parting gifts from the Lightning on top of that is great. It’s packages like this that make the other ones without packages so odd.

5. Marc-Andre Fleury (also a 2020 second-round pick)
Is he going to be a .920 goaltender for the Knights? No way. But he’s a very good “face of the franchise” and will be a great ambassador with fans. Plus, the second-round pick makes it a palatable choice when there were some speedy forwards available.

4. James Neal, Predators
He’s probably the best player selected by the Knights and instantly transforms the team from a 22-point club to a 29-point club.

3. Jonathan Marchessault (along with Reilly Smith’s big contract that cost the Knights their fourth-round pick in 2018)
Marchessault provides the best value of any player taken and Smith could bounce back after a down season.

2. William Karlsson, Blue Jackets (also David Clarkson and his giant, LTIR’able contract, a 2017 first-round pick and a 2019 third-round pick)
They got a first-round pick. They should have gotten more, but at least they got this one.

1. J-F Berube, Islanders (also took the massive contract of Mikhail Grabovski, defenseman Jake Bischoff, a 2017 first-round pick and a 2019 second-round pick)
And this one! One of the few deals where it feels like McPhee got the better of someone.