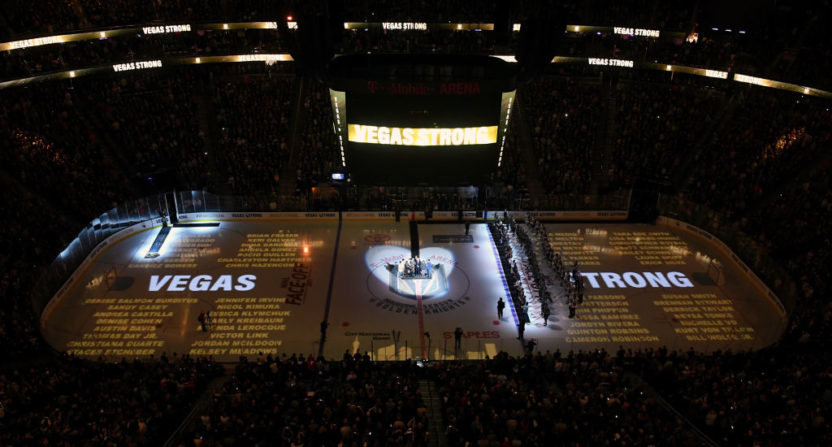 The Vegas Golden Knights played their inaugural home game tonight at T-Mobile Arena, and their pregame ceremony served as an amazing tribute to first responders and victims of the Las Vegas mass shooting on Oct. 1 that left 58 dead.

The team played this incredible #VegasStrong video in the arena, and even have the hashtag on the ice rink’s boards where advertisements would usually be.

There won't be any advertisements on the boards tonight. Instead, our boards will reflect who we are. #VegasStrong pic.twitter.com/29pL7wmMwJ

And as the Golden Knights took the ice, they were joined by first responders who were called out by name.

As the players stood on the ice with doctors, nurses, policemen, and firefighters, there was a 58-second moment of silence for the 58 people killed in the shooting.

The Vegas Golden Knights will honor the memories of the 58 victims tonight with their names emblazoned on the ice. #VegasStrong pic.twitter.com/Qc9sLOZQtv

Golden Knights defenseman Deryk Engelland has made Las Vegas his home since he played for the ECHL’s Las Vegas Warriors in 2003-2004, and gave a moving speech during the ceremony.

And the puck drop was conducted by survivors of the tragedy.

Then the game started, and the Golden Knights wasted little time getting on the board on this emotional night.

Tomas Nosek scores the first ever goal at T-Mobile Arena for the Las Vegas @GoldenKnights! pic.twitter.com/DgWhLLBXWm

The Golden Knights scored four goals in the first period, including a goal from Engelland.

Deryk Engelland is a Las Vegas native, and this goal means more than 1 point #VegasStrong pic.twitter.com/uj8tPbcwv5

Vegas came away with a 5-2 victory to become the first expansion team to ever start the season 3-0.