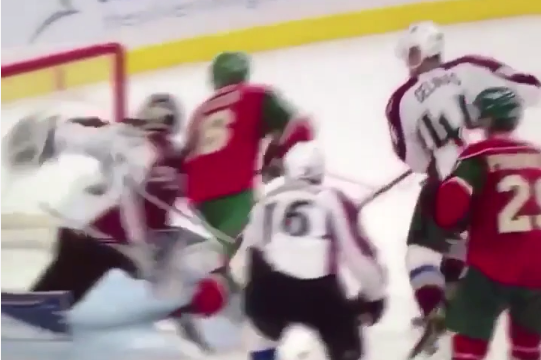 The NHL preseason has come into the fold quietly. But as the preseason quietly goes along, one play might be able to last beyond the league’s short preseason schedule.

During Tuesday’s preseason tilt between the Minnesota Wild and Colorado Avalanche, Colorado goalie Nathan Lieuwen made a ridiculous save and robbed Minnesota winger Jason Pominville of a sure goal:

What’s most amazing about the save is the sureness of Pominville that the puck was headed to the back of the net. Normally, players are pretty slow to react in the case of saves like that. I guess the preseason is a good time for Pominville to work on his celebration.

Pominville on robbery: "I thought that was going in. I actually raised my hands." #mnwild

Ultimately, the Avalanche went on to win the meaningless preseason tilt. But as this game disappears into oblivion, the save by Lieuwen will likely last for a while on highlight montages.