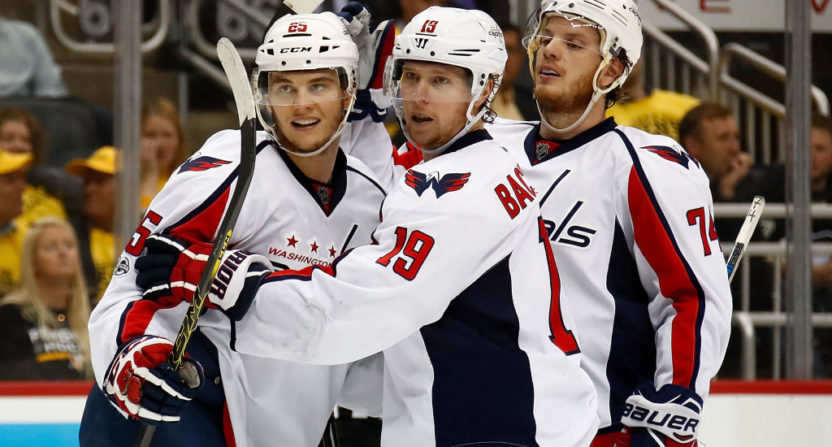 The Washington Capitals were one of the clear favorites to win the Stanley Cup last season after acquiring Kevin Shattenkirk in a trade with the St. Louis Blues just before the trade deadline. The move was the final sign indicating the Capitals were going all-in on the year, willing to sacrifice their future for the chance of winning now. As we all know, the Capitals didn’t achieve their goal and are now having to deal with the consequences.

It’s not rare to see a team go for broke to win a championship, but it is rare to hear a team admit that they’re dealing with the fallout from going for broke following a missed opportunity.

Here’s the full quote if you can’t read the image above:

“We spent the last three years building that team to where it was last year. We maxed it out player wise, and we were expecting to run into some issues here, going forward. It’s no different than the teams that have won in the past. We have the same kind of hangover, but we haven’t won a championship. And we’re dealing with it now.”

That quote won’t inspire much confidence in Capitals fans, especially in a summer which has seen the team commit a ton of money in a relatively small number of players while also parting ways with some good talent. That will lead to some extremely, extremely affordable options at the bottom of the roster.

And they paid more than they wanted in one instance.

MacLellan admits the Caps went a little higher than they wanted on Kuznetsov deal. "We had to comply to his demands."

All of that aside, MacLellan is trying to stay optimistic.

Do fans need to adjust expectations? GMBM: "I don't know. I think we've got good young guys coming up."

As of the posting of this article, the Capitals have 15 players signed to NHL contracts according to CapFriendly. Those 15 players have consumed roughly $66.4 million of a $75 million cap. That leaves a little over $8.5 million left to answer all of the other questions on the roster, including finding new deals for Andre Burakovsky and goaltender Philipp Grubauer. It doesn’t take advanced math to see that the Capitals are in quite the self-inflicted jam.

Meanwhile, the Capitals’ cap crunch resulted in the team having to part ways with some fairly significant players. Shattenkirk left through free agency, though it was always known he was a rental. Marcus Johansson was traded to the New Jersey Devils. Justin Williams left for the Carolina Hurricanes through free agency.

Where does this leave the Capitals? There’s no question the team will still be competitive in 2017-18 given their talent, but the future could be a bit darker. The Capitals sacrificed assets and money to win and they fell short. Now, they’re left trying to fill their lineup with the cheapest options possible while still pouring gasoline on the fire by handing out more big, long-term contracts. Did T.J. Oshie really deserve an eight-year contract? When will the Capitals move on from Alex Ovechkin to free up some needed cap space?

There are plenty of questions left for the Capitals to answer and those answers may not sit well with their fans.