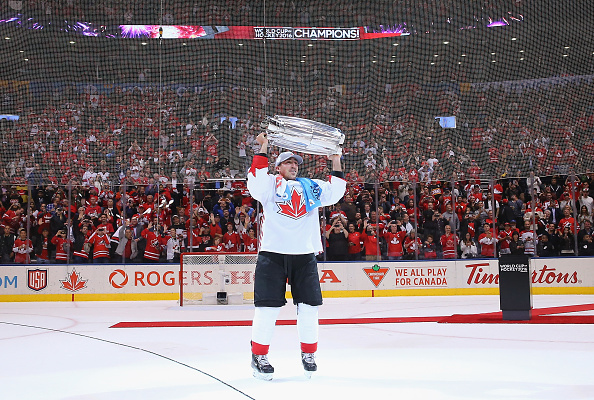 As a man who was once called the “little ball of hate,” Brad Marchand’s goal in Game 2 of the World Cup of Hockey semifinals had to have been pretty sweet for the man who has long-garnered a bad reputation among many opposing fans.

Marchand scored the goal that gave Canada the win they needed to clinch the World Cup Championship on Thursday. It came in the third period of a 1-1 game where there was less than a minute left. It also came in front of a hometown crowd in Toronto.

As Marchand has made his way into the NHL—and into prominence—plenty of negative feedback has followed. Some coaches have said that he is immature, and he was vilified by many opposing fans during the Boston Bruins’ Stanley Cup run in 2011. Marchand has long done on-ice taunts and questionable hits that get under people’s skins, and his actions don’t always stop when the play does, as SI’s Michael Farber wrote in 2012:

Boundaries shift. Limits are negotiable. Ethics are situational. The gamut of acceptable behavior in the NHL is so elastic that there are times when a 214-page rule book seems more like a compilation of helpful suggestions. Marchand operates in that ambiguous, lightly regulated postwhistle universe outside the normal time-space continuum of an NHL game. He agitates. He provokes. He drags his fingernails on the blackboard. After a whistle, Marchand figures he has 10 seconds. Maybe 15. This is when “a dirty little bastard,” in the words of one prominent and admiring Eastern Conference forward, colors outside the lines.

“Some guys don’t engage in that stuff. Some do,” Marchand says. “But the play doesn’t end with the whistle.”

He’s also struggled with his drinking and his image among non-Bruins fans. However, Marchand is more than just a pest. Since going goalless in 20 games in his first partial NHL season (2009-10), he’s scored 20-plus goals in five of the six seasons since (and 18 in the other one, where he played only 45 games), including 37 this past year. He finished this tournament with five goals and three assists in six games, too. Thursday’s goal seems like the perfect opportunity for Marchand to not only show off his skill, but also work on his continued rebuilding of his image.

Marchand hasn’t made nearly as many headlines for questionable things recently, and his critical goal here is more evidence of how good he can be as a scorer. He scored at a crucial moment, too, as winning this tournament is important to many Canadian fans. Hopefully those in Boston aren’t too mad that he led Canada to a championship while the U.S. went home early.