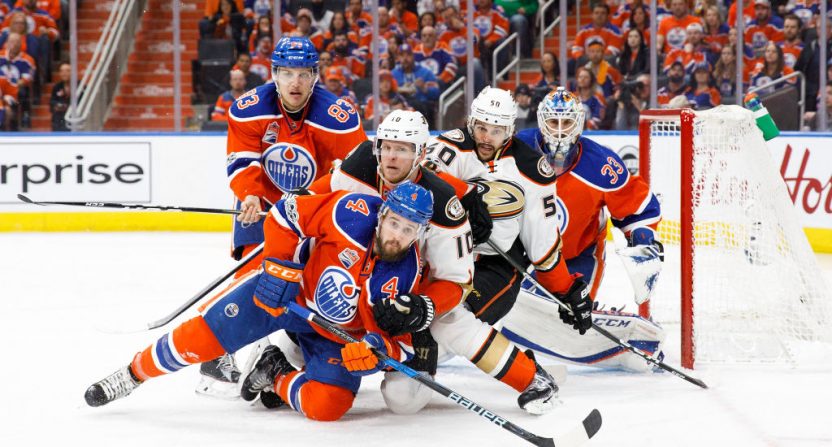 If you consider yourself a hockey fan in any kind of capacity, you might want to clear your schedule for Wednesday night. The evening of May 10th may be just another early summer night for some. But for hockey fans, it’s a night loaded with one of the sport’s crowning achievements: Game 7 drama.

First, the Washington Capitals will host the Pittsburgh Penguins in Game 7 action in Washington at 6:30pm EST. Next, the Anaheim Ducks will host the Edmonton Oilers at 10:00pm EST in the final game of their series. Both games will air on NBCSN.

So, unless your team is one of the four mentioned above, you can sit back and enjoy back-to-back Game 7s which will alter the course of the rest of the postseason. Things will be a bit more stressful for those involved, but even those fans should be able to recognize how awesome Wednesday night will be.

If you haven’t been following, here’s a quick recap of the two wild series which will soon wrap up.

Where to start? The Caps and Pens have a ton of stories through just six games, including Sidney Crosby’s concussion and the league’s bizarre response, the same exhausting claims that Alex Ovechkin can’t bring it in big games and many others.

The Capitals appeared to be on their way to another disappointing playoff exit, falling behind 3-1 in the series after four games. Then, in mostly unexpected fashion, the Capitals clawed out victories both at home and on the road to force a Game 7.

Will Marc-Andre Fleury and a concussed Crosby move on? Or, will Ovechkin finally shed some demons and banish the Penguins?

This series has been nuts, so it’s only fitting that it will go the distance.

The Oilers jumped out to a 2-0 lead, but the Ducks rallied to win the next three games to take the series lead. Their Game 5 victory will go down in the history books as the Ducks pulled their goalie and rattled off three goals before winning in double OT. That insane comeback would have crushed many teams, but the Oilers responded with a historic win of their own which included a rush of offense and some crazy stats.

There’s no telling how Game 7 will go based on the pure unpredictability of the previous six contests, but it’s bound to be entertaining.