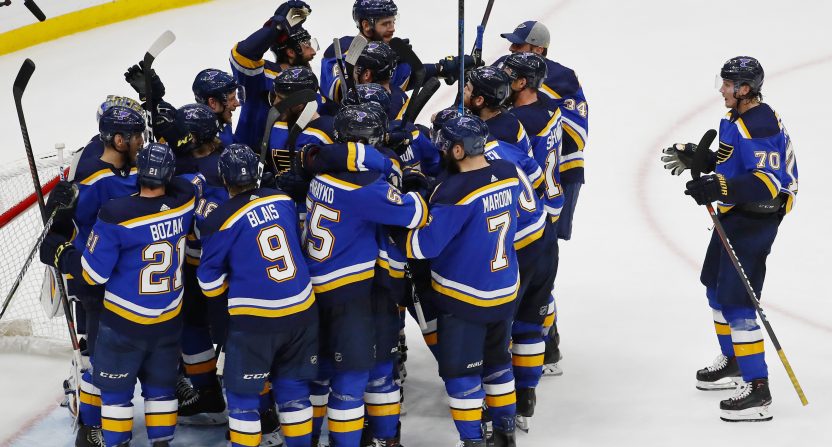 The St. Louis Blues reaching the Stanley Cup Final this year is absurd and nonsensical. The team that was dead-last in the standings at the start of January has climbed all the way up to the NHL’s biggest and grandest stage. They’ve done so through a rookie goaltender, relentless determination, a catchy song from the 1980s, and the support of a fan base that has waited decades for this opportunity.

But just how much does this mean for the Blues, their fans, and the city of St. Louis?

By now you probably know that the Blues’ appearance in the 2019 Stanley Cup Final against the Boston Bruins will be their first since 1970. That’s a stretch of 49 agonizing years. Alone, that statistic does a pretty nice job of summarizing what Blues fans have endured ahead of the upcoming series. But that’s just the surface.

DO YOU THINK THEY CAN HEAR US?!!! #stlblues #WeAllBleedBlue pic.twitter.com/daaNDRLAJt

The Blues have reached the Stanley Cup Final three times in their history (1968, 1969, and 1970) and have never hoisted the Cup. Those three appearances carry a bit of an asterisk as the NHL placed the new expansion teams, including the Blues, in their own division while keeping the original six teams in their own division. The Blues proved to be the best of the expansion teams in their first three years before getting stomped in the Final each time and watching another team lift the Cup. The Blues went 0-4, 0-4, and 0-4 in their only Stanley Cup Final appearances, and carries the unique distinction as the only team who hasn’t won a game in the Final through multiple appearances.

Then there’s the brutal disappointment the Blues have delivered to their fans between 1970 and the current season. Despite an incredible list of talent that has worn the Note over the years, including Brett Hull, the Plager brothers, Bernie Federko, and countless other greats and legends, the Blues continually struggled to get over the playoff hump. The Blues had a stretch of 25 consecutive seasons (1979–80 through 2003–04) where they reached the postseason, but none of those years produced a single Stanley Cup Final run.

You know times are tough when you’re called the “Chicago Cubs of the NHL” for a large chunk of your existence. While no billy goat or curse provided itself as an easy scapegoat, the Blues’ playoff woes often defied reality, physics and common sense. They found unique ways to end their season almost every single time they reached the playoffs.

Brace yourself, Blues fans – we’re about to dig up the past.

One of the most painful memories came in 1996 when the Blues faced the Detroit Red Wings in the second round. Hopes were high after the team acquired the Great One himself, Wayne Gretzky, in an attempt to finally move beyond the impassible playoff barriers.

And then things ended on a shot by Steve Yzerman from the blue line in double overtime of Game 7.

Most pointed the blame at goaltender Jon Casey, who whiffed on Yzerman’s shot. Others pointed at Gretzky, who lost the puck and Yzerman on the play. The harsh reality was this was yet another playoff exit that stunned the high expectations created by an immensely-talented roster.

Ugly long-range goals in Game 7s became a bit of a trend.

The Blues became their own worst enemy in the playoffs and always found a way to lose. They’d snatch defeat from the jaws of victory. Some of the greatest talent to ever play the game couldn’t dig the Blues out of their own heads. Fans counted down to the inevitable implosion that happened each year.

The 2019 Blues entered the year with lofty expectations following a plethora of offseason roster changes.  That anticipation died out in a hurry as the team collapsed in the first half of the season under head coach Mike Yeo. Most fans were already using the “maybe next year” line to bury their misery.

And yet, here we are. The Blues have made it to the Final and the city of St. Louis is in a full-blown celebration. Banners and flags are in windows, cars are honking “let’s go Blues” throughout all hours of the day and tears flowed in the Enterprise Center and around the city for all of the right reasons on Tuesday night.

Blues fans have hung with it, dug in and supported a team that hasn’t put the pieces together in nearly half a century. It hasn’t been easy, but that special bond that ties Blues fans together has finally been rewarded with a chance at the Cup. For many that alone is a victory worth celebrating regardless of what happens against Boston.