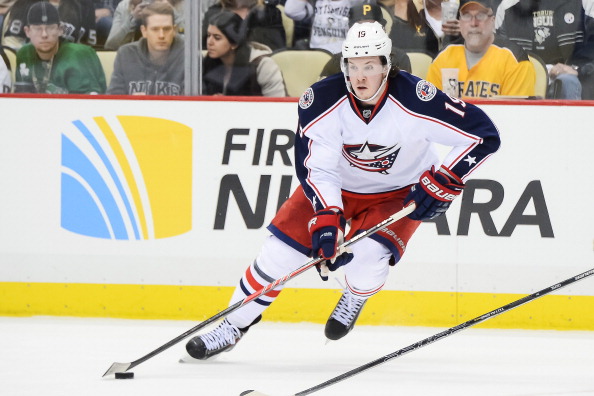 What should the Columbus Blue Jackets do with Ryan Johansen?

They should play him 20 minutes per night and never intimate through the media that he is fat, pleasantly plump or even the slightest bit out of shape.

Oh, sorry, I misunderstood my own question for the purposes of setting up and delivering my own joke. Allow me to clarify.

What should the Columbus Blue Jackets do with Ryan Johansen now that they have benched him and intimated through the media that he is out of shape?

Since a time machine that would allow GM Jarmo Kekalainen to travel through history to tell himself to avoid hiring John Tortorella and signing Nick Foligno and taking a tumultuous contract negotiation with Johansen personally hasn’t been invented yet, all that’s left is to get 85 cents on the dollar for one of the game’s top young talents.

Tortorella has treated his time in Columbus as if he were sent to prison and on his second day, he found the biggest guy and punched him in the face. Only here he found the team’s best player and questioned his fitness in front of the world. Shanking players is frowned upon in today’s softer, more family-friendly NHL, so Tortorella did the next-best thing by benching Johansen on Wednesday.

All that’s left is for Johansen to transfer to a different cell block, as a shirtless Tortorella bench presses 350 in the yard, glares knowingly as Johansen shuffles along between two guards and accepts a carton of smokes from Ryan Murray for protection.

Johansen’s $4 million cap hit comes off the books after 2017, when he will become a restricted free agent. He had a combined 59 goals and 134 points over the past two seasons and did not miss a game; this season, he’s down to just six goals and 22 points in 31 games despite seeing his possession numbers improve.

Is Johansen not scoring because of bad luck, as his shooting percentage rests at 7.7 percent, down nearly 6 percent over the past two seasons? Or is he not scoring because he’s out of shape, perhaps pulling the Homer Simpson move of gaining a ton of weight so he can work from home?

Tortorella’s contract runs through 2018, so did the Jackets already decide Johansen wasn’t in their future when they made the coaching switch in October?

With Johansen coming off a breakout 33-goal season in the final year of his entry-level deal in 2013-14, negotiations between Johansen and the Blue Jackets became very public and heated. A three-year, $12 million contract was consummated just before the season, the terms of which were not all that ideal for the team.

Johansen will be arbitration eligible after next season and the Jackets will have to qualify him for $6 million if they want to re-sign him.

Whether it’s a pricey qualifying offer the Jackets aren’t interested in giving a potentially underperforming player, an unhappy coach hunkered down for three years who doesn’t like the player or an unhappy player all set to pull a Ryan O’Reilly by signing an offer sheet the first chance he gets, it makes way too much sense for the Jackets to trade their 6-foot-3, 218-pound center if they know he won’t be part of the future beyond 2017.

#CBJ Johansen will be a healthy scratch tonight

A problem in the NHL today is this compulsive need to have every player be all things at all times. Every coach wants a two-way dynamo like Jonathan Toews or Patrice Bergeron capable of shutting down elite scorers in the defensive zone and scoring 25-30 goals against the opponent’s best defenders. For whatever reason, naturally gifted scorers that lack an appropriate level of defensive prowess are treated like pariahs.

No one’s comparing Johansen to Alex Semin, but when Tortorella is benching one of his players — ask Marian Gaborik about it if you get the chance — he’s clearly got it in his head that one of his scorers is lazing about in the other two zones and does not care who knows about it.

And there’s nothing wrong with that tactic, especially if that scorer has six goals nearly halfway through the season, but it’s not a tactic to be employed with a talented player that may have left already if he was offer-sheet eligible two years ago.

That is, unless you don’t care if that player leaves.

And if Tortorella is employing these tactics — a public shaming for chubbiness and benching two months apart — you know the front office is on board. Either way, it’s an odd thing to do to someone that averaged nearly 30 goals the past two seasons.

Meanwhile, Foligno has four goals in 33 games in the first year of a comical six-year, $33 million deal, but perhaps he does better on his cardio tests than Johansen.

The O’Reilly saga in Colorado played out until he was traded at the age of 24 last summer and signed a new long-term deal with the Buffalo Sabres for seven years and $52.5 million. Johansen turns 24 this summer and while he’s not quite in that echelon with O’Reilly, something similar is coming his way from some team in the near future.

If the Blue Jackets aren’t that some team, trading him sooner than later is the only choice.

Since taking over as coach, the Blue Jackets are 11-12-3 under Tortorella. That’s a vast improvement over the 0-7-0 team Tortorella inherited from coach Todd Richards. In the 26 games with Tortorella at the helm, the Blue Jackets’ Corsi has plummeted from 52.4 to 46.7 percent.

How have they won with such horrendous possession numbers? By deriding Johansen? Or because the goaltending went from .857 to .933 at 5-on-5? At this rate, it’s only a matter of time before Tortorella’s system sinks the ship. It only makes sense for Johansen to climb into a lifeboat sooner than later.