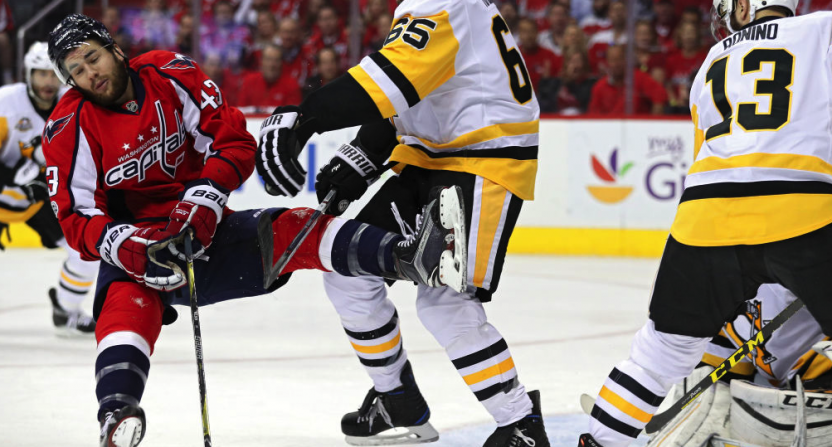 If hockey fans used that chant, it would be most oft directed at the Washington Capitals. Despite fighting back from 3-1 down in their series with the Pittsburgh Penguins and looking like the hex would be finally broken, here we are, writing the same story again.

At a point, there are no rational explanations when there is consistent and constant heartbreak at the same hurdle, and against pretty much the same team every year.

Could you find a cohesive argument to prove that Alex Ovechkin is responsible for the Caps’ failures at this stage every year? Probably. Could you blame Barry Trotz? Sure. Braden Holtby not up to his usual standards early in this series? Yep. Did the playoff format screw over the Capitals again? You bet. Are the Penguins and the playoff jinx in the Caps heads? Certainly looked like it in Game 7.

But even then, not one of the explanations on their own does enough to fully explain why the Capitals once again couldn’t clear their round two hurdle. If Mr. Game 7 can’t fix the Caps funk in this situation, can anyone?

“Every year, lots of expectations. Lots of great players. There’s something we’re missing,” Alex Ovechkin told reporters after the Caps’ 4-3 OT loss in Game 6 against the Penguins last year. “This group of guys can do better. Can go farther than the second round. I think we have the best goalie in the league. All four lines can play well. We just didn’t execute when we had a chance to put the puck in the net.”

That quote, as mentioned before, came last year after the Caps were eliminated by the Penguins. He could repeat this quote verbatim and everyone would think that this came after Wednesday’s Game 7. And the quotes from other long-time Caps are almost copy-and-paste from years past, too.

Backstrom, full quote: "We didn't lose the series tonight, we lost it in the first three games, four games."

Instead of writing more about what the Caps couldn’t do, or even can’t do when it comes to the postseason, now comes the litany of questions regarding what happens next. General manager Brian MacLellan has done just about everything he possibly could to end the hex. He jettisoned players like Mike Green, Joel Ward, Troy Brouwer and others who former GM George McPhee may have been too loyal to. He hired the best possible coach he could in Barry Trotz.

After repeated playoff heartbreak, MacLellan made what looked like shrewd moves to fix what ailed his teams (outside of giving Brooks Orpik that horrendous contract). When the blue line needed tweaking, he went out and tweaked it. When MacLellan thought this top six needed more skill and less grit, he went out and got it. But nothing worked to get the Capitals over that barrier, no matter what he tried and how many times he tried to swing for the fences.

During the 2015-16 season, MacLellan said his team had a two-year window to win the Cup. That window is now shut. Oshie, Williams, Winnik, Alzner and Shattenkirk are unrestricted free agents, and at most, one or two of them may be back next season. Kuznetsov, Burakovsky, Orlov and Schmidt are RFAs and the first two players are due a fairly healthy raise.

After two consecutive seasons of saying “this is the best and deepest Capitals team in the Ovechkin era,” it’s almost guaranteed that no one will say that for the 2017-18 Caps. Ovi, Backstrom and Braden Holtby aren’t going anywhere because of their contracts, but after a few offseasons of very little change inside the Caps dressing room, there is going to be a fairly big overhaul by their standards this summer.

Will MacLellan and Trotz be back next season? Almost certainly. In Trotz’s case, unless Mike Babcock, Joel Quenneville or Mike Sullivan suddenly becomes available, there isn’t a better head coach available anywhere, and it’s not solely his fault that the team is stuck at this hurdle. Maybe it would help the Caps to have a voice from outside the organization to come in and steer the ship, but he wouldn’t be doing too many things differently from how MacLellan has run things, and people feared that he may be too loyal to players he helped scout and sign as McPhee’s assistant.

Maybe the Capitals will be best served by taking a step back in regular season performance, which is likely coming as the roster all likelihood will get much younger and faster, especially on the back end. They at times looked slow against both the Leafs and the Penguins, who everyone in the league will model their teams after going forward. Washington does have some interesting young talent in the pipeline, but their prospect system is fairly thin and they won’t have a draft pick until the fourth round this year, limiting the potential trades they could make. The free agent pool isn’t exactly deep either, should the Caps want to dip their toes in.

“The team honestly makes me drink.”
We asked @Capitals fans how they felt after (another) Game 7 loss to the Penguins. It was… interesting pic.twitter.com/Wn3UI7f5RE

Whatever your reason of choice is for why the Washington Capitals can’t seemingly get over the hump in the second round of the playoffs, the team is about to undergo a pretty big retooling. It’s not a rebuild, since the team will still have Ovechkin, Backstrom, Holtby and other long-term building blocks, but the other cards in the deck are going to be reshuffled. The salary cap has forced those changes upon the Capitals, but in fairness it’s time for the team to have a rethink. Alex Ovechkin’s window isn’t closed just yet, but that time is coming much sooner than anyone wants to admit.

This was supposed to be their year. The Penguins were injured and broken, and well beyond Sidney Crosby. The West’s elite teams had already fallen so if the Caps cleared this hurdle, there might not have been much left to stop them. They fought back from the brink of elimination in Game 5 and exposed the Penguins’ problems for all to see in Game 6, yet they couldn’t do that just one more time. They had the start in Game 7 they wanted, but couldn’t convert. Then those thoughts crept back in and nothing the Caps did could get them out, and so here it is again: Another offseason for the Capitals with many more questions than answers.

Last year, the Caps knew they had one more chance with this group and Alex Ovechkin not yet really wondering whether his best hockey is behind him. Now, not only are they going to be re-tooling in a big way, they might now be wondering how much longer their superstar can be a superstar and a building block.

And that’s a scary thought, even for weary Capitals fans.