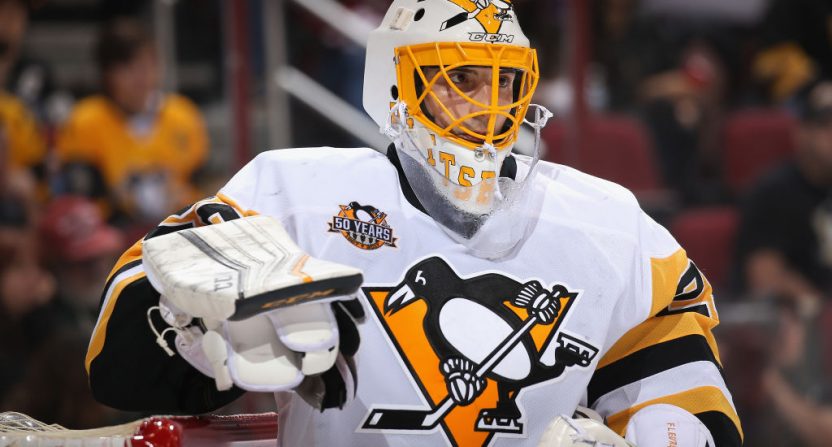 Pittsburgh Penguins general manager Jim Rutherford would have been happy to move Marc-Andre Fleury before this year’s trade deadline. But, and you won’t believe this, there wasn’t much of a market for a .908 goaltender with two years and a $5.75 million cap hit remaining on his contract. The NHL is wacky that way.

The Penguins’ best and only chance of shedding the contract was to expose Fleury in the expansion draft, but he would have to agree to waive his no-trade clause, so a buyout was on the horizon. That foregone conclusion is no longer foregone with Fleury going from mediocre backup to Conn Smythe Trophy favorite through two-plus rounds of the playoffs.

(Yeah, yeah, he allowed four goals on nine shots and was yanked in the first period Wednesday night, but the point remains that he’s had a very good postseason)

If one good postseason out of nowhere can get a player a big contract, it can make a player with an already existing big contract more appealing, and that’s what has happened with Fleury. In a thin goaltending market, Fleury is suddenly very attractive. A buyout remains possible if Fleury doesn’t want to waive his no-trade clause, but a trade is in play again.

With Matt Murray the future for the Penguins, where will Fleury call home next season? These are five potential destinations for the 32-year-old.

How badly do they need a goaltender? Worse than the need they had a year ago to fire Bob Hartley.

What do they have now? Nothing. Brian Elliott and Chad Johnson are unrestricted free agents.

Is it attractive to Fleury? The Flames have a great young core and if they had a competent goaltender in the playoffs, they could have beaten the Anaheim Ducks in the first round. They should be a playoff contender over the final two years of Fleury’s deal, so as long as Fleury enjoys the beautiful country that is Alberta, it could be a fit.

Could it happen? Definitely. The Flames have about $23 million in cap space, although they lack a second- and third-round pick in this year’s draft, which may be the compensation range it would take to land Fleury.

How badly do they need a goaltender? The only team that has ever needed a goaltender worse was that soccer team in the movie with Michael Caine and they played the Nazis and Sylvester Stallone was considering fleeing to safety at halftime but came back for the second half. That’s a very current movie reference you all get.

What do they have now? The flaming pile of goals allowed that is Ondrej Pavelec is a UFA, so the Jets are finally free of that horrific contract. Michael Hutchinson has one year at $1.15 million left on his deal and Connor Hellebuyck is a restricted free agent.

Is it attractive to Fleury? Is Winnipeg ever attractive to anyone? The Jets mysteriously suck [cough] Paul Maurice [cough] despite having a terrific group of forwards and quality defensemen, so why would Fleury want to go there?

Could it happen? It works from one standpoint — the Jets have an inexpensive goaltender to send back to the Penguins, who will be looking to save money this summer and need a backup for Murray. Having Fleury be the No. 1 and the other goaltender that stays behind to serve as a 1A or pure backup could work, and the Jets are flush with draft picks. It’s just hard to imagine Fleury wanting to go to a team that has yet to win a playoff game since relocating from Atlanta.

How badly do they need a goaltender? They need everything badly. They have like two dudes under contract and the expansion draft isn’t for another month.

What do they have now? They have someone running their social media stuff. And a general manager. They don’t even have uniforms yet.

Is it attractive to Fleury? Is Las Vegas unattractive to anyone? The question is, “Does Fleury like to gamble?” And the answer lies in this photo.

Could it happen? It seems extremely unlikely, as Fleury will almost definitely not want to spend two years on a fledgling expansion team before moving somewhere else. And Vegas will probably want to be as young as possible in an as many areas as possible, so having Fleury as a two-year stopgap shouldn’t be attractive to them, either.

What do they have now? Robin Lehner is an RFA and coming off a season where he had a .920 save percentage in 59 games. He is a due a nice raise from the $2.25 million he earned last season, so if Fleury were to go there, that would give the Sabres two goaltenders for around $9 million. Ask the Dallas Stars if that’s a good idea.

Is it attractive to Fleury? Buffalo is the Pittsburgh of New York, someone once said, probably. The Sabres’ best years are ahead of them, so perhaps Fleury could see himself staying there beyond his current contract and signing an extension.

Could it happen? It all depends on how new GM Jason Botterill feels about Lehner and Fleury. Botterill was in the Penguins’ organization from 2007 until a week ago, so he knows just about everything about Fleury. The Sabres have an extra second-round and third-round pick this year and plenty of room to add Fleury’s cap hit. Personally, this destination makes the most sense for everyone involved, so it should be the first one ruled out once the Penguins’ season ends, because that’s how this stuff works.

How badly do they need a goaltender? OK, this is the team that has the rich guy/yacht thing working. They have two Stanley Cup-winning goaltenders and they’re not far from winning another one.

What do they have now? They have Murray, who is locked into a new three-year, $10.5 million contract that begins next season. They also have some French-Canadian dude who likes flowers or something.

Is it attractive to Fleury? Well, he has spent most of his adult life there, so he must like it.

Could it happen? Even if Fleury wins the Stanley Cup this year, it will likely represent a wonderful conclusion to his time with the Penguins as opposed to the story that ends with Murray being shipped out of town instead. This run likely means the Penguins won’t have to buy out Fleury, but it won’t change the fact that this is it for Fleury in Pittsburgh.

1 thought on “Which NHL team will postseason star Marc-Andre Fleury play for next season?”