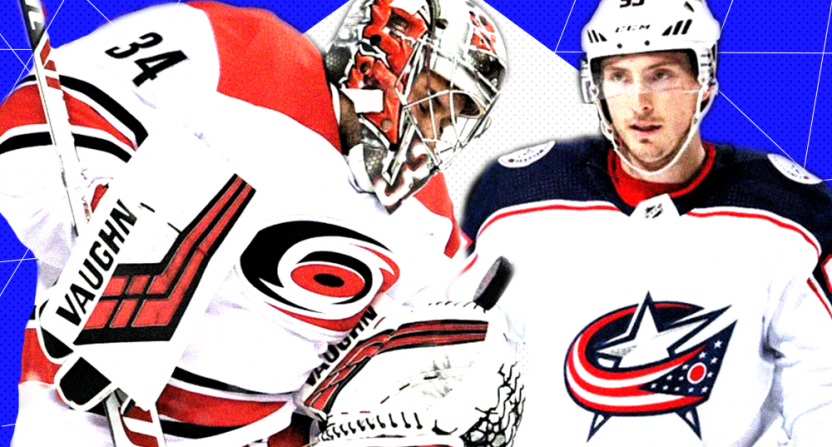 The NHL playoff Conference Semifinals are just around the corner, and the teams which will face off for Stanley Cup glory is becoming clearer and clearer. Along the way, a few players who are set to become unrestricted free agents have become key contributors both for teams still in the hunt, and teams that have been eliminated.

These players have helped their stock with strong playoff performances…

Duchene is among the top-tier free agents in the 2018-19 class, and was bound to see a big contract offer regardless of his playoff performance. However, after going goalless in his only eight postseason games over his first eight NHL seasons, Duchene finally delivered in the postseason.

In 10 games during Columbus’ unlikely run to the second round, Duchene was productive when it mattered. In the Blue Jackets opening-round sweep against the Tampa Bay Lightning, Duchene had seven points in four games, including a four-point effort in a Columbus 5-1 drubbing in game two, which set the tone of the series. Against Boston, he chipped in two goals and three points in six games – including a double overtime winner in game two against Boston.

If there was any knock against Duchene before the playoffs, it was his lack of postseason success. With a tremendous first round against the Lightning, the upcoming UFA proved he’s more than a regular-season point producer.

Before this season, Mrazek appeared to be a fringe NHL starting goalie. He proved in Detroit he was too good to be a backup goalie, but never showed enough to justify being a starter. Carolina decided to take a small gamble on him, inking Mrazek to a one-year, $1.5 million deal. In tandem with veteran backup Curtis McElhinney, Mrazek helped lead the Hurricanes to their first playoff birth since the 2008-09 season as the team’s 1A goalie. He started 40 regular season games, to a solid 23-14-3 record, a 2.39 goals against average, and a .914 save percentage.

Mrazek started out shaky in the playoffs, giving up seven goals combined in two consecutive losses in their opening round games against Washington. He soon stabilized between the pipes and strongly closed out the series. He stopped 40 of 41 shots against the Islanders in the second round, before getting sidelined with an injury midway through game two and ceding the net to McElhinney.

Despite the injury, Mrazek has proven he’s a capable starting goaltender in the league. He’s upped his game in the postseason, to a tune of 5-3-0 record, a 2.22 goals against average, and a .913 save percentage. Carolina will most likely make efforts to bring him back next season. But, unlike last summer, there should be considerably more of a market for Mrazek.

To say Mats Zuccarello’s regular season ended frustratingly would be an understatement. After getting traded from New York to Dallas last February, Zuccarello played in just two games before suffering an upper-body injury that would keep him out of action until the final game of the regular season. Thankfully for Dallas, he would recover in time for the playoffs and immediately contribute to a Stars team desperate for offense.

On the Stars’ second line, Zuccarello provided a much-needed offensive spark. In Dallas’ postseason opening matchup against the Nashville Predators, he chipped in three goals including the eventual game-winner in game one. In round two against the St. Louis Blues, Zuccarello excelled despite limited ice time. He scored eight points with a goal and seven assists in seven games. With his strong second round, Zuccarello ended up tied for first on the Stars with 11 points in 13 games.

Zuccarello is a talented offensive player and beloved teammate whos the type of player most NHL teams could use. Showing that he’s relatively healthy and still productive, despite getting slowed down has helped any value that might have dwindled post-trade to the Stars.

At first glance, Colin Wilson seems like an overpaid forward whose production doesn’t match his nearly $4 million annual salary. Wilson only had 27 points in 65 games in a third-line role in Colorado. He had a relatively fine production for his ice time, but not a great rate considering he was the team’s third-highest-paid forward. So with all that said, how come Wilson makes this list? He’s been dynamite in the playoffs for the Avalanche.

In 11 games against the Calgary Flames and San Jose Sharks, Wilson has four goals, three assists, and seven points which ranks fourth on the Avalanche in scoring.

Wilson has a knack for outperforming his regular season production in the playoffs. Back in the 2015-16 season, he followed scoring 24 points in 64 games in the regular season with 13 points in 14 game playoffs for the Nashville Predators. “Playoff Wilson,” as Avs fans have called him, is a real thing. For Wilson, his recent production should help him secure a better deal than he was looking at just a month ago.