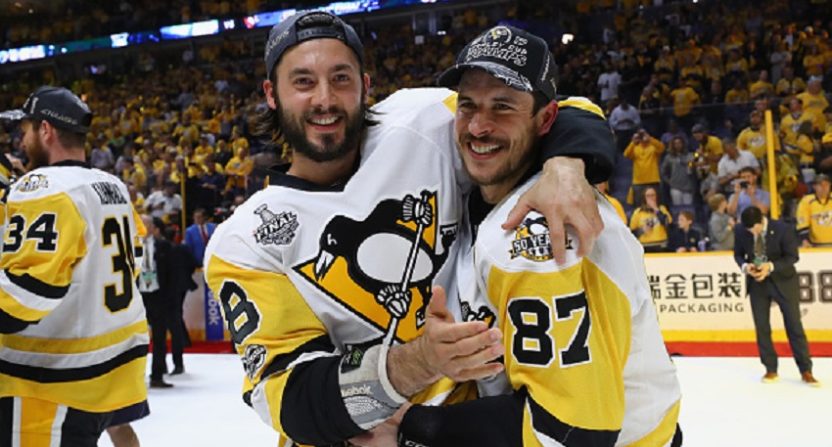 For the first time in 19 years, the NHL has a repeat champion. The Pittsburgh Penguins took care of the Nashville Predators in six games in the Stanley Cup Final and about a day later, Las Vegas installed the Penguins as 9/1 favorites to win it all again in 2018.

That’s almost always what Vegas does after a team wins a title. Yet in this case, it feels like a no-brainer.

But can the Penguins become the first team to threepeat since the New York Islanders dynasty that won four straight in the early 1980s? Is it possible for a team to win three straight titles in a salary-cap era, when the game is as punishing as it has ever been?

And the Penguins are going to do it. Here are the six reasons why we will be writing about whether the Penguins can win four straight this time next year.

1. The core is still in its prime and returning for next season.

Sidney Crosby (29), Evgeni Malkin (30), Phil Kessel (29) and Kris Letang (29) aren’t anywhere close to declining. Maybe “prime” is too strong a word, but the Penguins have the league’s two best forwards in Malkin and Crosby while Kessel is, at worst, top-20 among forwards. All three have been around a point per game in the playoffs, so there’s no reason to think they can’t carry the water again next year.

They’re all back, so you can expect the same dynamic offense. If one wasn’t back, and you had a Steve Carell leaving The Office situation where the Penguins replaced Kessel with a big-name forward that didn’t mesh as well, you could worry. But all three are signed for a long time.

Letang will enter the season among the candidates for the Norris Trophy, as he is probably one of the five best defensemen in the league. And, oh yeah, that brings us to point No. 2…

2. The Penguins just won a Cup without a No. 1 defenseman.

There’s no guarantee that Letang will be healthy when the postseason rolls around next year, but come on. If he plays just one playoff game next year, the Penguins are already ahead compared to this past postseason. They went 16-9 in the playoffs (which is a 105-point pace in the regular season) without their minutes-eating power play quarterback, and he’ll probably be back next season.

Whether it’s the first or second round, the Penguins will probably encounter a Caps team that could not beat the Penguins when they were without Kris Letang, Matt Murray and Crosby for one game. What on Earth makes you, me or anyone think the Capitals won’t fold when they likely meet again next year?

If the Penguins have another easy first-round matchup like they did this year, then get the Capitals in the second round, they basically have a bye to the conference finals.

4. The Penguins should have enough cap space to get better in free agency.

Let’s say the NHLPA decides to use the cap inflator, pushing the ceiling to $76 million. As of right now, the Penguins have about $16 million in space to sign seven players. But if the reports are true and Marc-Andre Fleury is going to Vegas in a trade, that gives the Penguins nearly $22 million to spend on eight spots.

They have some in-house moves to make first, like getting Justin Schultz and Brian Dumoulin signed, but there’s nothing that should break the bank.

How about third-line center Joe Thornton on a bargain deal and throwing money at T.J. Oshie since Patric Hornqvist only has one more year left on his deal? I’m pretty sure I’ve got a way to get Bonds and Griffey and wouldn’t cost that much!

Look, I don’t pretend to know a damn thing about guys playing junior hockey. Daniel Sprong could have been living in my apartment building the past six months and I wouldn’t know him if I saw him. But the 2015 second-round pick had 32 goals in 31 games for the Something Or Others in that Quebec league, so maybe he’s ready.

Or maybe he was a 20-year-old man crushing 17-year-olds. Who really knows?

But that’s more potential entry-level contract production for the Penguins, which is the quiet thing every championship team has.

6. Really, who is the team that is beating the Penguins four times out of seven?

The Penguins are surrounded by corpses and zombies. They are still objectively the best team in the league and appear poised to get better.

As long as the wear and tear of three straight runs or an outright catastrophic injury to a key player don’t take their toll, the Penguins are probably doing it again next year.

OK, maybe the Tampa Bay Lightning will be trouble — but that’s it.