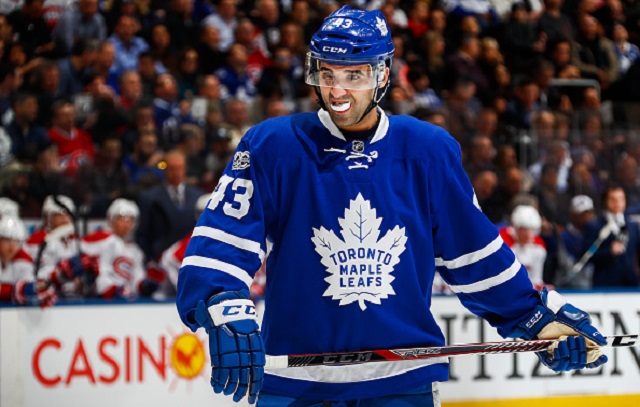 If there’s one thing the NHL has over the other major North American sports leagues, it’s the number of very wealthy white guys. So if your bloodshot, weary eyes are looking for a high-profile or any-profile athlete to speak out against Donald Trump’s Muslim ban, you probably want to direct them somewhere else.

The demographics aren’t all that different when it comes to the hockey media, either. It’s mostly white guys (‘Sup!) that only feel oppressed when a team’s new coach removes the donuts from the press room and replaces them with vegetables. It’s not a great mix for activist sports journalism when it comes to social issues.

There are two Muslim players in the NHL — Nazem Kadri of the Toronto Maple Leafs and Nail Yakupov of the St. Louis Blues. New York Rangers center Mika Zibanejad is a Swedish citizen with family in Iran, one of the seven countries on the banned list. Brandon Saad of the Columbus Blue Jackets was born in the United States but his father and other family members hail from Syria, another banned list country. No NHL player today is a citizen of the seven banned countries.

Zibanejad toed the line in an interview with the New York Daily News, expressing concern about the ban but wanting to wait and see where it goes, “then it’s easier to kind of comment on.” Kadri called the ban “unfortunate,” which is how you’d classify a puck going into your net off your skate, not blatant racism, and the story was a mere secondary item in two Leafs notebooks that day. As far as I can tell, no one has asked Yakupov, who hails from Russia, about the ban. Saad had a courteous no comment.

None of that is as strong as the response by American-born Kyle Lowry of the NBA’s Toronto Raptors, who called the ban “bullshit” four times in a 20-second quote and refused to repeat himself when asked to say it again without the naughty words. (I still can’t believe that last part happened.) Luol Deng penned an eloquent letter on the subject, as he lived as a refugee in Egypt after fleeing South Sudan.

The NHL, which has nearly three-quarters of its players born in countries that are not the United States, hasn’t made a peep publicly about this ban. That’s odd, considering the global nature of the league and the fact it wishes to play games in other countries.

So if the handful of NHL players that are affected the most don’t have anything to say and the league itself won’t take a stand against discrimination, what is the responsibility of the hockey media and its least-affected players?

When it comes to hockey and politics in recent years, you have Tim Thomas bailing on a White House visit with the Boston Bruins because he hates Barack Obama, noted goon Tom Sestito of whatever AHL team currently pays most of his salary expressing similar sentiments about Obama on social media, and the small group of hockey players like Andrew Ference and Brad Marchand speaking for LGBTQ equality rights. It’s the last group that should give you hope, since the other group probably thinks Obama is a secret Muslim, anyway.

So what’s the protocol? Hockey players are afraid to say anything too positive about a goal they scored because they don’t want to upset the team dynamic that has a level of conformity rarely seen outside military units and Scientology. In a lot of players’ minds, there’s probably a fear being seen as selfish for pointing out the discriminatory and hateful nature of this ban. That last sentence is probably difficult to process, but that’s the culture of hockey. These are human beings that felt the breakaway challenge at the skills competition was too me-first and got that event canceled.

Here is what I’d say to players that have very strong opinions but are afraid to vocalize them: Hey, man — vocalize them.

Because here’s the thing about hockey media — WE. ARE. COWARDS. We don’t want to put anyone on the spot or go to all 20 lockers and force the same question on people that may not want to answer it. But mostly, we are cowards. You have to seek us out. You have to pull someone aside you trust and whisper in their ear, “I want to go on the record and tell you this Muslim ban is bullshit.”

Maybe your trepidations stem from not wanting to speak for someone else. Hey — speak for someone else. It’s OK here. These are wildly extraordinary times. We are one or two more steps from living in a fascist country, if we’re not there already. Give a voice to the voiceless. You don’t need to have a Muslim friend to consider this ban bullshit and to say it in front of a camera. This is textbook, “First they came for the…” territory, and now is the time to speak out. Considering the news cycle, Trump will create five more fires by the end of the month and Muslim ban will feel like a distant memory, and that shouldn’t happen.

If you think that you, the third-line guy playing for a team that’s on NBCSN once every three years can’t help, you’re wrong. There needs to be a first guy through the wall. Think about the You Can Play initiative we now almost take for granted — there had to be a few players willing to speak out for gay rights at the beginning to get the ball rolling. Do you really want to live the rest of your life knowing you could have used your position as a famous athlete to help prevent potential atrocities but chose not to?

The fear in speaking out, especially for any player that is Muslim or from a predominantly Muslim area, is violent repercussions. You’re naïve if you think the attack on the mosque in Quebec City will be the end of this or had nothing to do with an executive order that served to embolden white supremacists. There’s a chance if you take a stand, you will become a target. It’s a legitimate fear not to be taken lightly.

There’s also a chance things will get worse if you don’t and things definitely will not change if we maintain the status quo. That’s for you to weigh. Me? I’m happy to watch Nazis get punched in the face from now until the end of time and I don’t care who knows it.